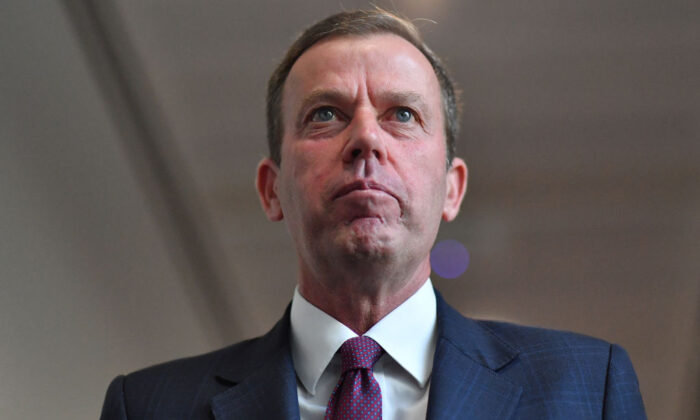 Australia has expressed its wish to join in a formal complaint launched by the European Union (EU) against the Chinese communist regime over its use of coercive trade tactics directed at nations it disagrees with.

The EU filed the complaint to the World Trade Organization (WTO) on Jan. 27 as a result of Beijing’s unofficial economic embargo of Lithuania after the European nation allowed Taiwan to open a de facto embassy under the name “Taiwan” rather than “Chinese Taipei.”

This is a direct challenge to the Chinese Communist Party’s (CCP) “One China” policy, which claims that Taiwan is a part of mainland China, with only 13 members of the United Nations and the Vatican recognising it as an independent nation. Australia is not one of them.

“Australia opposes the use of economic coercion and discriminatory and restrictive trade practices which undermine the rules-based international trading system and cause economic harm,” Tehan said.

It comes after Beijing initiated its own trade war on Australian goods—including on coal, wine, barley, beef, lobster, timber, and cotton—a response triggered after Australia called for an independent inquiry into the origin of the CCP virus.

Meanwhile, China enjoys preferential treatment in global trade under the WTO due to its self-declared status as a developing nation.

“We are committed to upholding and supporting the multilateral trading system with the WTO at its core,” Tehan said. “The WTO dispute settlement system is designed to help members settle their differences in a respectful manner.”

“Australia has a substantial interest in the issues raised in the dispute brought by the European Union against China regarding discriminatory trade practices imposed on Lithuania and will request to join these consultations.”

For Lithuania, the incident that sparked outrage from Beijing had been the final straw in a longer line of actions that upset the communist regime, which includes Lithuania’s decision to condemn the CCP over its mass detention of Uyghurs, as well as choosing a Swedish company over Huawei to supply the nation’s 5G network.

As a result, the Chinese regime slammed the European nation with import and export bans, while at the same time pressuring companies that traded with Lithuania to stop—or else lose business with China.

Beijing then subsequently blocked goods from Germany, France, and Sweden that contained components made in Lithuania.

The EU has filed a request to meet with China representatives in Geneva after gathering what it deems to be ample evidence from affected Lithanian businesses.

“These actions, which appear to be discriminatory and illegal under WTO rules, are harming exporters both in Lithuania and elsewhere in the EU, as they also target products with Lithuanian content exported from other EU countries,” said the EU in a statement.

But China’s foreign affairs spokesman Zhao Lijian demanded the EU not get involved.

“We also advise the EU to distinguish right from wrong, remain vigilant against Lithuania’s attempts to hijack China—EU relations, and persuade Lithuania, like other EU member states, to fulfill the political commitments it made as establishing diplomatic relations with China,” warned Zhao.

“We urge Lithuania to immediately correct its mistake,” he added.

Zhao had previously expressed a similar sentiment after admitting the trade war against Australia was based on ideological differences.

“We will not allow any country to reap benefits from doing business with China while groundlessly accusing and smearing China and undermining China’s core interests based on ideology,” Zhao said.

Australia’s calls for an inquiry into the origin of the CCP virus was also the final straw in a series of actions that had angered Beijing and prompted economic retaliation—from which Australia has since largely recovered.

Australia has previously spoken against China’s territorial claims in the South China Sea. It also banned Huawei from the nation’s 5G network over concerns of espionage, while tearing up the Belt and Road Initiative deal between Victoria and Beijing.