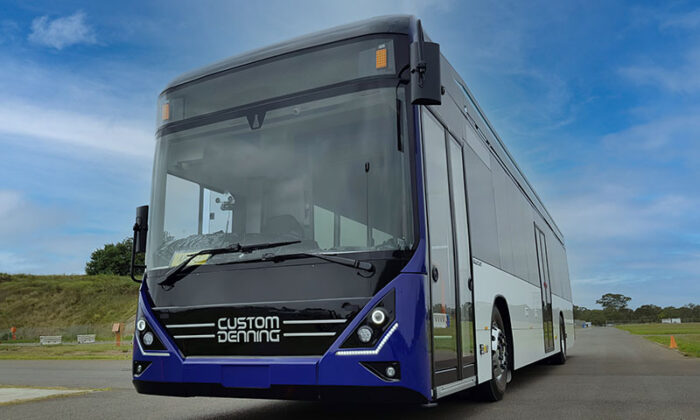 Australia Rolls out Its First Locally Made Electric Buses

The New South Wales (NSW) government has invested $70 million (US$50 million) in an Australian manufacturer to design and build new electric buses locally in Sydney, helping it to make every possible component of the electric bus Australian-made.

The bus and coach manufacturer Custom Denning said that it is the first top to bottom Australian designed and manufactured electric bus, from the chassis to the seat covers and passenger handrails.

“We manufacture all the steel components for our production line on site, and pack them into stillage kits for delivery to our production facility,” manufacturing manager Danny Mottley said in a release.

“We do all our own in-house cutting, laser cutting, aluminum welding, tig welding, mandrel tube bending for stanchions, seat frames, and square tubing as well.

From the smallest of parts to the largest, it’s great to see it all manufactured right here, and then come together to create an entire bus.”

Premier Dominic Perrottet toured the St Mary’s factory on Feb. 14 to inspect the production line and meet workers in the electric bus transition.

“This is a true Western Sydney success story and our government is proud to have played a part in this business producing the first locally-built electric bus,” Perrottet said in a release on Monday.

After the company grew to require a dedicated manufacturing site, it established a new production facility at St Mary’s in Nov. 2019.

In just over two years it has grown to 160 workers.

“Custom Denning employs 160 workers at their St Mary’s factory and this investment will now provide more jobs to ensure our buses are built to the highest standard,” Perrottet said.

Typically, Australian buses are diesel-fueled. Electric vehicles are instead fueled by electricity from the power grid, and will be rechargeable from smart charging stations.

Opposition Leader Chris Minns said he would not count on the premier’s decision made on the back of the by-elections last weekend, and he’d be “very surprised” if the premier follows through on his domestic manufacturing pledge.

Minns told AAP that the premier had left it “very late in the game” for the government to “all of a sudden be a huge supporter of domestic manufacturing.”

Custom Denning said that their production models of electric buses are being rolled out and are ready to replace standard diesel buses immediately across Australia.