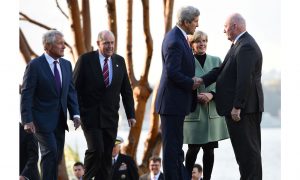 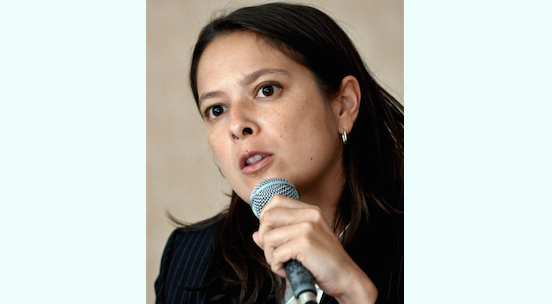 Human Rights Watch (HRW) deputy Asia director Elaine Pearson speaks during a press briefing in Manila on April 7, 2009. She said recently, "We want other countries in the region to be rights respecting countries for the prosperity and stability of the region.” (Jay Directo/AFP/Getty Images)
Asia & Pacific

SYDNEY—Australia risks losing its status as a strong supporter of human rights if it does not act accordingly, says Elaine Pearson, the head of Human Rights Watch (HRW) in Australia.

“Australia’s own human rights record, particularly in regards to the treatment of asylum seekers and refugees, has really affected its credibility to be outspoken on a number of issues,” Ms Pearson said.

In an interview with Epoch Times, Ms Pearson said Australia, one of the largest and oldest democracies in the region, has traditionally been an active proponent of human rights.

“It has robust institutions, strong freedom of the press, freedom of expression and as such it should be playing a leading role in promoting human rights in the region,” she said.

She cited Prime Minister Tony Abbott’s recent negative comments about a UN report that said Australia’s offshore detention facilities are in breach of the country’s international obligations. Mr Abbott’s criticism of the Australian Human Rights Commission (AHRC) and its call for a Royal Commission into child detention does not reflect well on Australia, she says.

Australia is working to gain a seat on the United Nations Human Rights Council (UNHCR) in 2018, but that position may now be in question unless Australia addresses rights concerns.

In a statement delivered to the UNHCR last weekend, the Human Rights Law Centre (HRLC) urged the Council to take note of Australia’s recent performance, including the treatment of asylum seekers and the attitude toward the AHRC.

Anna Brown, the centre’s director of advocacy, told the ABC: “It’s really important, if Australia’s trying to promote itself as a human rights leader, that its actions actually live up to those ideals. And at the moment they clearly are not.”

Ms Pearson said it was in Australia’s interest to promote respect for rule of law and similar freedoms.

“We want other countries in the region to be rights respecting countries for the prosperity and stability of the region,” she said.

Australia’s handling of asylum seekers, however, has not been a good example. The flow of refugees from oppressive or failed states is a crisis of global proportions, she says. “Simply putting up walls around Australia is not going to make that go away.”

Australia is in a position to develop a regional approach to asylum seekers, to lead the way in setting up systems which take into account “the rights of displaced people.”

“That would go a long way towards giving these people some kind of future and in a way that didn’t require them to be locked up on a South Pacific island in pretty bad conditions and at risk of further abuses,” she said.

A complacent approach on human rights is also a concern with the rise of China which is among the world’s worst offenders, showing little respect for rule of law, freedom of speech, assembly or belief. In agreement with Chinese authorities, human rights concerns are raised by Australia only in annual Human Rights Dialogues which have long been criticised for their secrecy, lack of transparency and attendance by low level officials.

I think they are surprised when a government like Australia doesn’t raise these issues.
— Elaine Pearson, the head of Human Rights Watch (HRW) in Australia
“It was very disappointing for instance when Tony Abbott went to Beijing and said human rights are a matter for the Human Rights Dialogue but not a matter for discussion between heads of states,” Ms Pearson said.

“I think they are surprised when a government like Australia doesn’t raise these issues,” she added.

It is also important to speak out both privately and publicly on human rights particularly for those speaking out in their own countries who, without international support, pay a terrible price.

“If the public and private statements don’t match up, then there is no real pressure on governments to improve their behaviour,” she said.

Ms Pearson acknowledged that human rights may be an uncomfortable issue to raise but noted that they are universal values laid out in the Declaration of Human Rights, of which China and Australia are signatories.

“Everyone is actually accountable for these violations … and it is up to each country to abide by international law,” she said.

Headquartered in New York, Human Rights Watch is a non-profit organisation which has been prominent in highlighting rights concerns around the world for over 30 years.