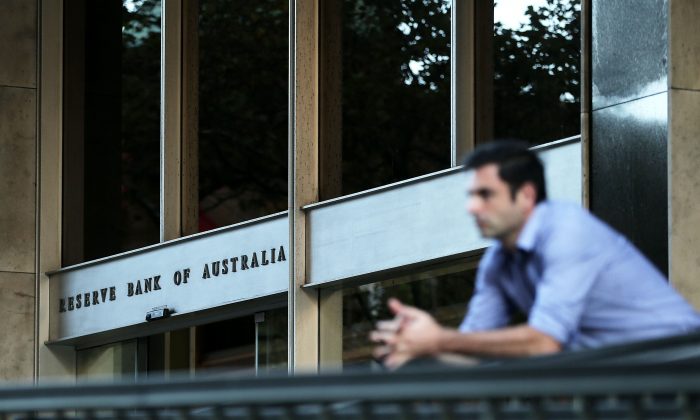 The Reserve Bank of Australia headquarters in Sydney on on May 5, 2015. (Mark Metcalfe/Getty Images)
Australia

Part of the reason world financial markets rebounded from their lows in February was the G20 summit in Shanghai, China, at the end of February 2016.

Sometimes these summits mark important turning points in financial markets because policymakers come out with a statement reassuring the markets. The funny thing about this summit: There was no big statement.

However, markets soon realized there must have been an unofficial agreement between the world’s biggest economies (the United States, China, Japan, and Europe) to end the currency wars or competitive devaluations of their currencies.

This was later dubbed the Shanghai Accord, akin to the New York Plaza Accord of 1985, which also ended volatility in currency markets and ushered in a secular bull market in stocks and bonds. Then as now, the world’s economic powers decided to let the dollar weaken against major trading partners to reduce the United States’ current account deficit (boosting U.S. exports) and ease dollar liquidity around the world.

Of course, currencies don’t just move in a vacuum, and central bank action has supported the dollar weakness with the specific goal to ease dollar liquidity worldwide, the lack of which was responsible for the crunch in financial markets since the Fed raised rates for the first time in December 2015.

The Fed, for example, has not increased rates further, and other central banks have not increased their quantitative easing programs. But while the original Plaza accord lasted for years, the Shanghai accord may already be falling apart, even though none of the big economies seem to have broken it.

Australia Goes Against the Agreement

Instead, it is the relatively less important Australia (still part of the G20) that took the surprise step to lower interest rates by 0.25 percent to 1.75 percent on May 3, a record low. Despite the new record, Australia still has one of the highest benchmark interest rates, and its currency gained 7 percent against the dollar since the Shanghai Accord.

“Inflation has been quite low for some time and recent data were unexpectedly low,” Reserve Bank of Australia Governor Glenn Stevens stated.

Jim Rickards, the bestselling author of the original book “Currency Wars,” had this to say on Twitter about Australia’s move: “In case you thought Currency Wars were over due to the Shanghai Accord, guess again. Australia just broke the ceasefire.” New Zealand and Japan did not choose to lower rates further at the end of April.

Australia’s GDP has been growing between 0.3 percent and 1.1 percent annualized per quarter for the past two years, so on the surface, there should be nothing to worry about. However, a sharp slowdown in the Chinese economy has led to fewer exports of Australian commodities as well as lower prices, pushing the trade balance deep into negative territory since the beginning of 2014.

Also, it’s not only the U.S. dollar that counts for Australia. Its main competitors for commodity exports are Brazil and South Africa, whose currencies have declined 13 percent and 15 percent respectively against the Australian dollar over the past year. In the meantime, the shares of Australian mining giant BHP Billiton have declined 37 percent over the same period.

It remains to be seen whether the Reserve Bank of Australia’s move helps its mining and export industry—and whether other countries will follow suit and join the currency wars again.