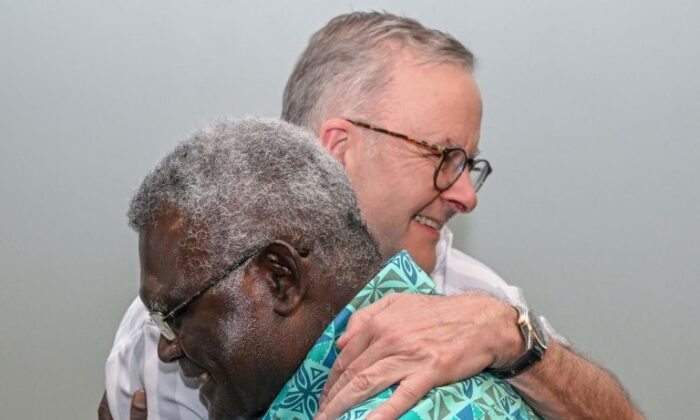 Australia will provide the Solomon Islands with more than $17 million for the Pacific Games as a slate of ministers and top U.S. diplomats tour the region to combat Chinese influence.

Conroy says he received reassurances Australia remained the island nation’s security partner of choice, and there would be no foreign military bases or persistent military presence in the Solomons.

“It was a very warm and friendly meeting, and we discussed a range of issues. Our security partnership was obviously one part of that,”  Conroy told reporters in Honiara on Tuesday.

But Conroy didn’t directly speak about China’s influence in the region when asked by reporters.

“That’s a question for the government of China about their interest in this region,” he said.

“What I’m interested in is how Australia can be a true and faithful member of the Pacific family, how we can listen to the priorities of our Pacific family and act upon them, and the number one is climate change.”

U.S. Deputy Secretary of State Wendy Sherman said during her visit to Canberra on Monday, following a trip through Samoa, Tonga and Solomon Islands, that “climate is such an existential threat, and it’s understood so powerfully out here”.

U.S. President Joe Biden is due to host leaders of Pacific island nations at the White House in September, and Australia’s Assistant Treasurer Stephen Jones is heading to Vanuatu for a meeting of economic ministers.

Sherman’s trip through the region, where she visited Honiara over the weekend with U.S. ambassador to Australia Caroline Kennedy, comes as domestic tensions rise in the Solomons.

Sogavare has since moved to amend the constitution to extend his time in office by delaying elections until the end of 2023.

The prime minister has nominated the Pacific Games as the reason for the postponement, saying voter registration wouldn’t be possible due to preparations.

The opposition has branded the move a power play.

“Many of us think it is an attempt to stay in power and using the Games as an excuse,” Opposition MP Peter Kenilorea Jnr has said.

“There’s a lot of time to have the elections as well as enjoy the Games later that year in November 2023.”