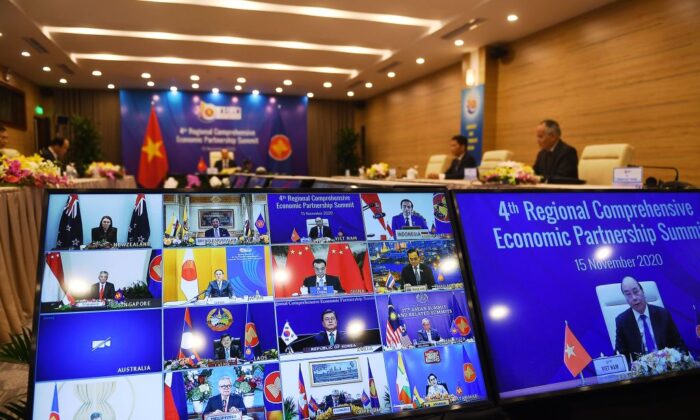 Vietnam's Prime Minister Nguyen Xuan Phuc is pictured on the screen (R) as he addresses his counterparts during the 4th Regional Comprehensive Economic Partnership (RCEP) Summit at the Association of Southeast Asian Nations (ASEAN) summit being held online in Hanoi, Vietnam on Nov. 15, 2020. (Nhac Nguyen/AFP via Getty Images)
Australia

Australia has ratified one of the biggest trade deals spanning the Asia-Pacific region, but has maintained “grave concerns” over the political situation in Burma, also known as Myanmar.

In a joint statement on Nov. 2, Foreign Minister Marise Payne and Trade Minister Dan Tehan said businesses and farmers would have access to the benefits under the agreement from Jan. 1, 2022.

The minister’s noted, however, that ratifying the deal did not “change the government’s grave concerns regarding the situation in Myanmar.”

“We call on the Myanmar security forces to cease violence against civilians, engage in dialogue, and release all those arbitrarily detained, including Australian Professor Sean Turnell,” they said.

Protests and unrest have broken out across Burma since the military junta staged a coup on Feb. 1.

RCEP meanwhile, will establish a common set of rules across various areas of trade including intellectual property and services such as financial, healthcare, and education.

The deal has been called a “low ambition” trade deal by former Prime Minister Malcolm Turnbull.

A view backed by the Joint Standing Committee on Treaties (JSCOT) which found in an August 2021 report that, “RCEP is not a particularly ambitious trade agreement, and in terms of market access does not deliver much in the way of additional benefit for Australia.”

However, RCEP could offer Australia an alternative mechanism for dealing with trade disputes, which the World Trade Organisation (WTO)—in its current state—is unable to do so effectively.

A spokesperson for the Department of Foreign Affairs and Trade (DFAT) told The Epoch Times, “The RCEP agreement contains rules and procedures to resolve disputes that may arise between the parties in relation to their commitments under the agreement, a common element of Australia’s free trade agreements.”

Australia is also a signatory to the Comprehensive and Progressive Agreement for Trans-Pacific Partnership (CPTPP), which includes 11 nations and covers 13.4 percent of global GDP.