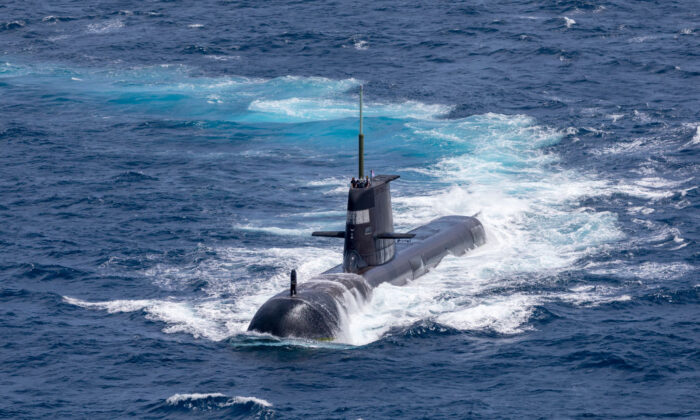 Prime Minister Scott Morrison is set to splash AU$10 billion (US$7.3 billion) on a new nuclear submarine base on the east coast of Australia, as he warns the world to be ready for a “new arc of autocracy.”

In a speech to the Lowy Institute on March 7, the prime minister said the invasion of Ukraine was the “latest example of an authoritarian regime seeking to challenge the status quo through threats and violence.”

“This is what autocrats do. It is not the product of a sudden madness or a failure of earlier diplomacy to resolve just grievances,” he told the forum. “These are the bloody and violent acts of an autocrat determined to impose his will on others, in the contrived self-justification of realising nationalistic destiny. We have seen this before.”

Morrison said the rules-based international order, which has “for decades supported peace and stability” is now “under assault.”

“A new arc of autocracy is instinctively aligning to challenge and reset the world order in their own image,” he said.

The prime minister said that the “strategic, political, economic, and social implications” of the Ukraine crisis will “inevitably stretch” to the Indo-Pacific.

Australia’s Department of Defence has whittled down the list of potential submarine sites from 19 to three—Brisbane, or Newcastle and Port Kembla, just north and south of Sydney—and is set to make a final decision in 2023. The base will also be included in the upcoming federal budget.

Australia’s current submarine base is in Fleet Base West near Perth in Western Australia—while a strategically important area, an ongoing difficulty has been the recruitment of submariners and lack of infrastructure, which an east coast base is expected to alleviate given the larger population base.

“Establishing a second submarine base on our east coast will enhance our strategic deterrent capability, with significant advantages in operational, training, personnel and industrial terms,” Morrison said.

Meanwhile, the prime minister did not expect the conflict in Ukraine to end anytime soon.

“We expect Russia to continue its brutal attacks, including bombarding residential areas, even nuclear facilities, with scant regard for civilian casualties or the broader catastrophic impact,’’ he says. “Everything points to a bloody and protracted conflict.

Morrison said the “well-motivated altruistic ambition” of international institutions to moderate the intentions of autocratic regimes was a false hope.

“We are right to aspire—however the hope that such inclusion and accommodation would lead to some reform or moderation of these regimes or assist us in tackling the big global economic and environmental challenges has been disappointed,’’ he said without directly naming the Chinese Communist Party (CCP). “As prime minister, I have been warning about this for years.”

Morrison also took aim at vocal opposition to his firm stance against the CCP including former Labor Prime Ministers Paul Keating and Kevin Rudd. While Morrison’s immediate predecessor, former Liberal Prime Minister Malcolm Turnbull, has been critical of the decision to enter the AUKUS agreement with the United Kingdom and United States.

“It’s going to result in us having nuclear submarines, if it ever comes to pass, that we not only can’t build, can’t maintain and will not be able to operate on our own,” he told ABC Radio on March 7.

“It’s exactly the worst thing that we should be doing in the face of the threats we face.”

Morrison said during the speech that his government had “been targeted” for his stance against Beijing’s expansionism.

“But I am pleased we have been prepared to stand our ground. If not us, then who? Would we be expecting others to do it on Australia’s behalf to protect our interests?” he said. “I do not believe Australians want such timidity and resignation from their leaders.”

Nations in the Asia-Pacific region have been steadily building up their military over the past few years in response to ongoing aggression from Beijing, which again lifted defence spending, this time to 7.1 percent of GDP, according to Chinese Premier Li Keqiang.