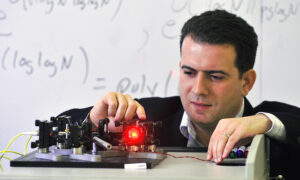 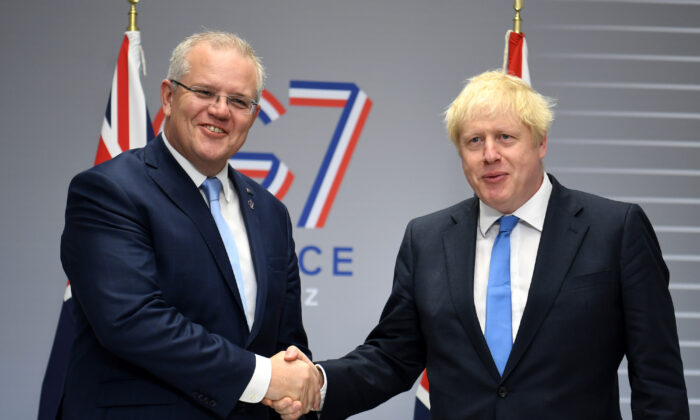 Australian Prime Minister Scott Morrison on June 9 delivered a warning about the growing threat of conflict in the Indo-Pacific on the eve of his trip to the United Kingdom, where he will be a guest at the Group of Seven (G7) Plus meeting of world economic powers.

In a significant foreign policy speech that alluded to the continued rise of an aggressive and expansionist China, Morrison warned that Australia faced many challenges to protect its way of life, security, prosperity, and maintain stability in the region.

Morrison said above all it was the “defining issue” of global security.

G7 leaders from Canada, France, Germany, Italy, Japan, the United Kingdom, and the United States are attending the global conference later in the week.

“We very much need to be there because there is a lot at stake, for Australia, for our region, and indeed the world,” Morrison said at the Perth USAsia Centre, referring to UK Prime Minister Boris Johnson’s invitation to Australia to participate in the talks.

“We are living in a time of great uncertainty not seen since the 1930s, outside of wartime. The challenges we face are many,” he added.

Morrison said the global trading system and rules-based order that had benefitted Australia and liberal democracies for so long was now under serious strain and threat.

“Our challenge is nothing less than to reinforce, renovate and buttress a world order that favours freedom,” he said.

The world was in a similar state of flux in the aftermath of World War II, Morrison noted. Faced with a similarly uneasy climate, he called for liberal democracies to reforge Cold War cooperation to better uphold a rules-based international order.

“The risks of miscalculation and conflict are present and growing,” he added.

The Australian prime minister wants to see a world order that is safe for liberal democracies to flourish, free from coercion, which favours freedom over autocracy and authoritarianism.

“We are facing heightened competition in the Indo-Pacific region,” he said, adding: “The task is to manage that competition.”

“Competition does not have to lead to conflict. Nor does competition justify coercion,” he said.

The prime minister leaves for the United Kingdom tomorrow to attend the global summit, where he is also expected to push leaders to restore penalties under the WTO to combat economic coercion.

Morrison pledged support for fixing the World Trade Organisation’s (WTO) dispute process after Australia launched an action at the body against Beijing over barley tariffs.

Beijing’s trade sanctions are considered “economic coercion” by experts and politicians at home and abroad.

Morrison sees the WTO as the only global body that has the power to quell coercive trade behaviour and said he will work with leaders at the G7 Plus to buttress the body and modernise its rulebook.

“A well-functioning WTO that sets clear rules arbitrates ­disputes objectively and ­efficiently and penalises bad ­behaviour when it occurs: this can be one of the most powerful tools the international community has to counter economic coercion.

“In my discussions with many leaders, I have taken great encouragement from the support shown for Australia’s preparedness to withstand economic coercion in recent times. The most practical way to address economic coercion is the restoration of the global trading body’s binding dispute settlement system.

“Where there are no consequences for coercive behaviour, there is little incentive for ­restraint,” he said.

Morrison said that Australia stands ready to engage in dialogue with China when it is ready.

While in Cornwall, Morrison is expected to meet with U.S. President Joe Biden and the leaders of Japan and South Korea.

On the way to the summit, Morrison will stop in Singapore for a bilateral meeting with Prime Minister Lee Hsien Loong to discuss regional security, trade, and a potential travel bubble.

“There will be important opportunities … to secure broad international relationships, which are so important to Australia’s national security,” Morrison told Parliament on June 2.

Climate policies are likely to be high on the G7 Plus agenda, but Morrison noted that Australia needs to work out how it will prosper and protect Australians and the country’s interests in a new “net zero emissions” economy.

Morrison doesn’t want to surrender Australia’s economic advantages nor put at risk its resources, manufacturing, and heavy industries, as well as jobs, especially in regional Australia, without imposing higher costs on Australian families.

He will also hold talks in London with British leader Boris Johnson as Australia seeks to conclude a free trade agreement with the United Kingdom, where agriculture has been the main sticking point of the agreement.

Australia has made it clear to UK negotiators that freeing up agricultural trade will be essential to settling the agreement and also to the United Kingdom establishing its global free trade credentials post-Brexit.

With a Royal Navy carrier strike group recently sailing through the Indo-Pacific, Australian officials are confident the United Kingdom is showing a genuine interest in the region and want to encourage a closer connection.

A meeting with French President Emmanuel Macron in Paris is also expected to canvass the $90 billion submarine project, which has been plagued by multiple cost and timetable blowouts.

Naval Group executives visited Australia earlier this year in a bid to promote its commitment to maximising Australian content in the Attack Class submarines.

Morrison will also meet with the new head of the Organisation for Economic Co-operation and Development, former cabinet colleague Mathias Cormann.