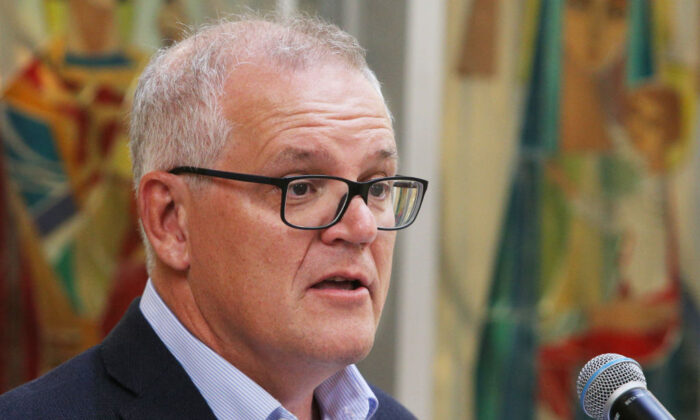 Australia Pledges $50 Million to NATO to Provide Weapons for Ukraine

The Australian government will provide AU$70 million (US$50 million) to purchase military equipment and weapons for Ukraine in its efforts to fend off an ongoing Russian invasion.

Prime Minister Scott Morrison made the announcement following a meeting of the National Security Committee and will see the funds channelled to NATO where it will be decided how the money is distributed.

A further $35 million of humanitarian aid will be delivered to provide shelter, food, and medical care.

“The overwhelming majority of that ($70 million) will be in the lethal category,” the prime minister told reporters on March 1.

“We are talking missiles, ammunition, we are talking supporting them in their defence of their own homeland in Ukraine.”

Morrison would not go into specifics of what type of lethal military aid was being provided and how it would be delivered.

“I don’t plan to give the Russian government a heads-up about what is coming their way, but I can assure them it is coming your way,” he said.

“We will be answering the call from (Ukrainian) President Zelensky. He said, ‘Don’t give me a ride, give me ammunition,’ and that is exactly what the Australian government has agreed to do.”

Morrison welcomed the efforts from fellow nations in sanctioning Russia but warned that President Vladimir Putin would likely amp up the aggression.

“It is also likely to lead to an even more violent response from Russia,” he said. “Anyone who thinks the Russian government is just going to sit there, I think, doesn’t understand the intent and the outrageous objective of President Putin.”

He also called on Beijing not to extend any “lifeline” to Russia.

“There is real economic pain being felt as a result of these sanctions,” Morrison said. “But the impact of the world’s response to impose a price on President Putin needs to be reinforced by countries like China because if they extend a lifeline to them, as they have in taking their wheat exports by easing trade restrictions on Russian wheat into China that only serves to undermine, I think, the principled stance that has been taken by so many other countries around the world.”

Currently, the government is processing around 100 visa applications from Ukrainians each day.

In solidarity, Australia’s Parliament House and later the Sydney Opera House will be lit up with the colours of the Ukrainian flag.

“The legal position of those who may seek to do that is very unclear … anyone seeking to do that would find themselves on the wrong side of some very, very violent attacks,” he said.

It comes after the Ukrainian president signed a decree temporarily lifting visa entry requirements for foreigners wishing to join in the defence of the eastern European nation.

Meanwhile, Russia’s Foreign Ministry has warned members of the European Union against providing weapons to Ukraine.

“EU citizens and entities involved in the delivery of lethal weapons, fuel, and lubricants to Ukraine will bear responsibility for any consequences of such actions to manifest themselves during the ongoing special military operation,” according to a statement.

“They cannot fail to understand how dangerous these consequences are,” it added. It did not elaborate on what penalty or punishment Russia might try to inflict.

Ceasefire talks between Russian and Ukrainian representatives have yielded no results, with Russian forces approaching the Ukrainian capital, Kyiv.

Fighting is continuing around the country.