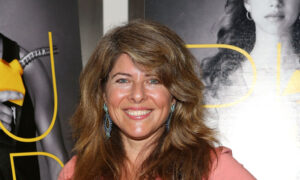 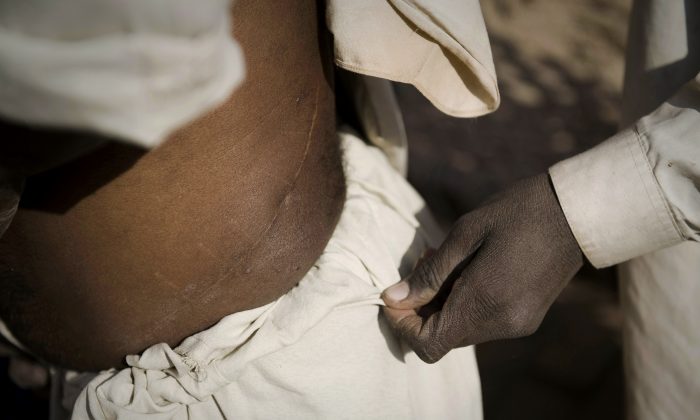 Son of Karm Ali, 65, shows his father's scar outside their house at a brick factory in Rawalpindi, Pakistan, on November 18, 2009. The four family members have all sold one of their kidneys for 100,000 Pakistani rupees (1,200 dollars) in order to repay a loan from the brick factory contractor who pays them 1,000 rupees (12 dollars) each per week. (NICOLAS ASFOURI/AFP/GettyImages)
Australia

Australia Opens an Inquiry Into the Illegal Organ Trade

A federal inquiry is underway to consider what extra measures in the Australian legal system may help to deter organ trafficking and transplant tourism crimes.

Very few individuals have stepped forward as witnesses to these crimes, making it difficult to estimate how many Australians participate in organ trafficking or transplant tourism. Some experts say there may be significantly more cases than the 10 or 20 cited in the media, as currently there is no system in place to capture this information.

For Australians, “organ trafficking happens for various reasons, but the foremost of them is the lack of timely access to transplants domestically,” Dr Dominique Martin told ABC. Some people wait over eight years for a kidney transplant in Australia, reported News Corp.

“According to the United Nations, organ trafficking is an organ transplant (or attempted transplant) involving force or other forms of coercion (including deception) over a person in a vulnerable position,” says MegaphoneOz. “It may also involve the giving/receiving of payment.”

The UN warns that the demand for organs is increasing due to the prevalence of diet and lifestyle-related diseases such as diabetes.

With a relatively static number of organ donors, it is projected that more individuals may engage in desperate black market transactions that pose great risk to both the donor and recipient.

While Australia has strict laws for ensuring and regulating ethical practices in organ donation and transplants that occur within the country, the current legislation does not encompass extraterritorial crimes.

This loophole means that an Australian getting an illegal organ transplant overseas is immune from criminal charges under current federal law.

The inquiry into human organ trafficking and organ transplant tourism provides individuals and organisations an opportunity to submit evidence to the Commonwealth government to address these crimes. Such testimony can be instrumental in shedding light on black market transactions beyond Australia’s borders.

“It can be very hard to gauge the numbers of how many Australians go overseas and engage in unethical organ trade,” NSW MP David Shoebridge told The Catholic Weekly. “There is some data kept at a national level, but it’s very patchy.”

Shoebridge initiated a state-level bill to prevent residents in NSW from purchasing and receiving illegally sourced organs while overseas. He is enthusiastic that the federal inquiry will give the issue the political impetus it needs to ensure legislative reform.

The Human Rights Sub-Committee leading the inquiry will consider whether Australia should join as a signatory of the 2014 European Convention against Trafficking in Human Organs. The groundbreaking convention aims to “facilitate co-operation at national and international levels” on preventing organ trafficking. This would be a monumental move for Australia towards a zero-tolerance policy for organ trafficking crimes and the entities that facilitate these practices.

Cases of local exploitation—where organs are stolen or purchased at a low price from socially vulnerable victims in countries like the China, Philippines, India, Central America, Egypt, and the Middle East—have been widely publicized. “People may be kidnapped, killed and sold, especially children, for their organs,” according to the UN Regional Information Centre for Western Europe.

However in the case of China, the majority of crimes occur within a controversial state-sanctioned system in which organs are sourced from prisoners. This is a politically sensitive issue for the Chinese communist regime, which has tried to suppress discussion of the subject. In many countries, including Australia, Chinese consulates have threatened positive bilateral relations when pressed on reports of large-scale forced organ harvesting from political prisoners.

The official story by Chinese authorities is that until 2015, the majority of organs came from “death-row prisoners“—a policy that the Chinese Communist Party (CCP) implemented in 1984. Following a growing chorus of international criticism surrounding this practice, the CCP announced that it would ban the use of prisoner organs as of Jan. 1, 2015.

However, experts remain skeptical of the CCP’s claims. Conflicting statements from CCP officials support critics’ lack of confidence surrounding the claimed 2015 ban. According to a medical ethics publication, “Even after January 2015, key Chinese transplant officials have repeatedly stated that death-row prisoners have the same right as regular citizens to ‘voluntarily donate’ organs.”

According to Ethan Gutmann, investigative journalist and co-author of a 2016 investigative report on the CCP’s organ harvesting crimes, “There is an indisputable mound of information at this point showing that Chinese transplant volumes are significantly higher than anything that Beijing has claimed.”

However, the CCP’s official execution figures remain a state secret.

Human rights investigators have long reported that the primary target of organ harvesting in China has not been death row prisoners, as claimed, but instead prisoners of conscience: innocent individuals detained for their peaceful beliefs and killed on demand to fuel an organ transplant industry.

Who are these prisoners of conscience?

“We are looking at Falun Gong in the main, but also Uyghurs, Tibetans and House Christians. These are the groups that have been targeted from the beginning and they continue to be targeted,” says Gutmann. Falun Gong, a form of physical and mental discipline that enjoyed widespread popularity in China throughout the 1990s, was targeted for elimination in 1999 by the Communist Party leader at the time, Jiang Zemin.

Since around the year 2000 imprisoned practitioners of Falun Gong report being blood-tested and having their abdominal organs subject to unusual examinations. When a potential organ recipient arrives at a hospital in need of a transplant, the prisoner is led away and given to medical personnel, who harvest the organs. This process, which is believed to take place while the victims are still alive — though likely anesthetized — results in death.

The European Parliament has recognised the mounting evidence, expressing “deep concern over the persistent and credible reports of systematic, state sanctioned organ harvesting from nonconsenting prisoners of conscience in the People’s Republic of China, including from large numbers of Falun Gong practitioners imprisoned for their religious beliefs, as well as from members of other religious and ethnic minority groups.”

Estelle Steiner, spokesperson for the Council of Europe, told The Epoch Times that the 2014 Council of Europe Convention against Trafficking in Human Organs aims to criminalize the use of prisoner populations as organ banks as “prisoners on death row can in our view not give a free and informed consent to donating organs as they are at risk of being subjected to undue pressure because of their personal situation.” This directly addresses the CCP’s state-backed transgressions in harvesting organs from prisoners of conscience.

The ISIS terrorist group is also reported to have harvested and trafficked organs from its victims, although not nearly to the same scale as the CCP. According to Ambassador Mohamed Alhakim, an Iraqi diplomat, ISIS was harvesting and transporting organs out of one hospital in Mosul, Iraq, when the city was controlled by the terrorist group in 2014.

Australia’s acceding to the 2014 European Convention would ensure that, whether it be in China, India, Pakistan or elsewhere, all crimes of organ trafficking are punishable under Commonwealth law.

The illegal market “presents a clear danger to both individual and public health, and is in breach of human rights and fundamental freedoms and an affront to the very notion of human dignity and personal liberty,” said an explanatory document to the convention.

A number of countries, including Taiwan, have already enacted legislative changes to deter their citizens from the human organs trade. Wendy Rogers, Professor in Clinical Ethics at Macquarie University, says Australia should emulate these changes going forward.

Israel made it illegal for insurance companies to pay for overseas transplants, and “like Al Capone, they went after the money,” said head of Westmead Hospital’s renal unit Professor Jeremy Chapman to NewsCorp.

The United States House passed resolution HR 343 calling upon the U.S. Department of the State to conduct “a more detailed analysis of state-sanctioned organ harvesting from non-consenting prisoners of conscience” in China, specifically condemning the CCP’s actions.

The U.S. Government also implemented a requirement that all applicants for non-migrant visas classified as DS-160 must specify if they have been involved in the “coercive transplantation of human organs or bodily tissue.”

“Australia, as a developed nation and economy in the Asia region, needs to ensure that we do not engage in the unethical Transplant Tourism, therefore creating a market for organ harvesting and organ trafficking,” said Andrea Tokaji, international human rights consultant. “Australia has an obligation to do its part in legislating against the unethical international trade in human organs.”

“We have a moral duty to make sure we don’t take advantage of people overseas,” echoed Mr Shoebridge. He noted that there are other areas in Australia’s criminal legislation where extraterritorial criminal sanctions already apply, including child sex offences, piracy, and corruption.

The Human Rights Sub-Committee welcomes submissions of comments and evidence on crimes of human organ trafficking and organ transplant tourism to the inquiry. Submissions are due by Monday, Aug. 7, and can be lodged here.

Witnesses in such inquiries are granted immunity from legal action under the Parliamentary Privileges Act 1987.