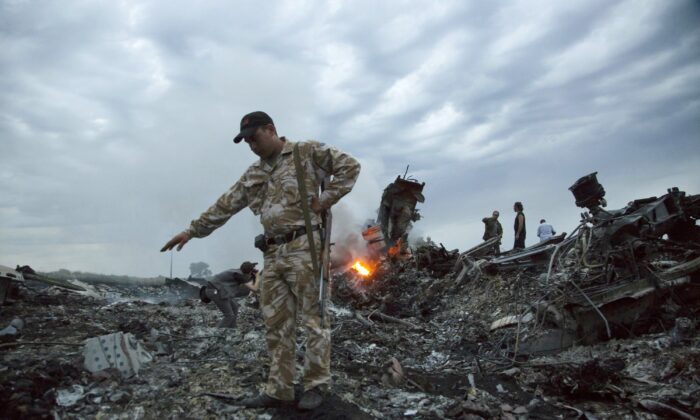 People walk amongst the debris at the crash site of MH17 passenger plane near the village of Grabovo, Ukraine, on July 17, 2014. (Dmitry Lovetsky/File via AP)
Australia

Australia and the Netherlands have launched a joint action against Russia over the 2014 downing of Malaysian Airlines flight MH17.

The action will be filed in the International Civil Aviation Organisation (ICAO) and names Russia as responsible for the incident under international law.

Flight MH17 was shot down on July 17, 2014 while flying over separatist, eastern Ukraine.

All 298 people onboard were killed, including 193 Netherlanders, 43 Malaysians, and 38 Australians.

“This is an important step in the fight for truth, justice and accountability for all of the victims of MH17, including the 38 who called Australia home,” Australian Foreign Minister Marise Payne told reporters on March 14.

“That obligation is of paramount importance in preserving the safety and security of international civil aviation,” Cash told reporters. “The downing of Flight MH17 was a clear breach of the Chicago Convention. A breach for which Russia bears responsibility.”

“It caused tremendous grief and suffering to the next of kin of the victims—pain aggravated by the absence to date of any acknowledgement by Russia of its responsibility,” she said.

Russian authorities withdrew from negotiations in October 2020, leaving agencies in Australia, Belgium, Malaysia, and the Netherlands to continue their investigations.

Cash said the legal action will be based on evidence concluding that:

Australia and the Netherlands will seek a declaration from the ICAO that Russia breached the Chicago Convention—and order it to re-enter negotiations in good faith to resolve the matter of full reparations for “injury caused by Russia’s breach.”

Further, they are requesting the ICAO notify the assembly that Russia is in default under the Chicago Convention and that the voting power of the country be suspended. Any further punitive sanctions need to be considered by the body.

Foreign Minister Payne said the action was “complementary” to an ongoing civil action by Dutch authorities in its national courts—that Australia is apart of—as well as an action for human rights breaches at the European Court of Human Rights.

Australian Prime Minister Scott Morrison said in a statement that the legal efforts would provide justice to the families of victims.

“While we cannot take away the grief of those whose loved ones died as a result of Russia’s actions, the Australia government will pursue every available avenue to ensure Russia is held to account so that this horrific act never happens again,” he said.

The penalties will cover the heads of Russian state-owned enterprises and the armed forces following sanctions—numbering around 460—from the United States, United Kingdom, European Union, Canada, and New Zealand.