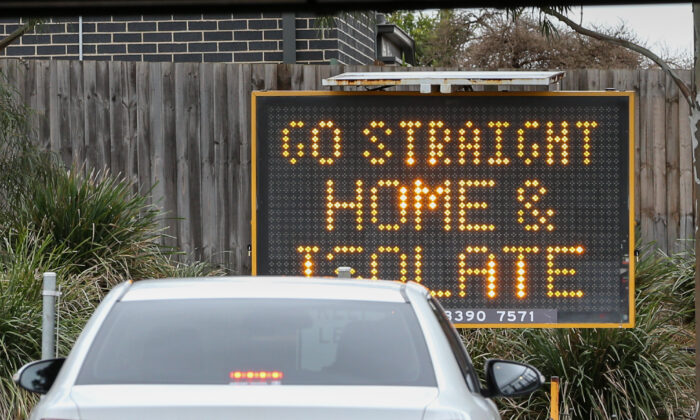 Australian authorities have been told to rethink COVID-19 policies as the population is growing increasingly tired of health restrictions around the pandemic.

New South Wales (NSW) Premier Dominic Perrottet told Sky News Australia that authorities need to scrap the mandatory isolation period for COVID-19. This comes just days after the National Cabinet agreed to reduce the isolation period from seven days to five on Aug. 31. Although the reduced isolation period will not come into effect until Sept. 9.

Speaking to Sky News, Perrottet said that he would like to see the isolation period removed entirely “as soon as possible.”

“I believe we need to move away from public health orders, we need to move … to a system in which we’ll respect each other—if you’re sick, you stay at home; if you’re not sick, go to work,” he said.

“The state should not be enforcing these orders at this time in the pandemic.”

The call from the NSW premier comes as many other countries—including Israel, the UK, the U.S. and many European nations—have already dropped the COVID-19 isolation period.

COVID-19 Cannot Continue to Be Treated as an Emergency

Queensland Chief Medical Officer Dr. John Gerrard told the ABC that he believed there needs to be a change to Australia’s approach to the pandemic.

“People are tired,” he said. “We cannot continue to treat this as an emergency. It just doesn’t work. They’ll just stop listening.”

Gerrard has signalled that Queensland is considering using a traffic light system to help residents in their state modify their behaviour during periods when COVID-19 is spreading throughout their communities.

“The future is not with directions and mandates and legal enforcement,” Gerrard told the ABC. “The future is with people modifying their behaviour naturally, particularly when we see waves of transmission occurring.”

This would mean Queenslanders would be told the virus spread was at a red alert level and would coincide with the health authorities suggesting that everyone wear masks in crowded indoor environments.

“In green, it might be, for example, that we just wear them in general practitioner waiting rooms,” he said.

AMA Calles For Health Advice to Be Made Public

However, the Australian Medical Association (AMA) is not keen to move away from the health restrictions.

AMA President Prof. Steve Robson, in a media release, has called for the federal government’s health advice around the reduced restrictions to be made public, arguing that with only a five-day isolation period, many people will potentially still be infectious and pass the virus on, leading to greater outbreaks.

“Throughout this pandemic, the AMA has continuously said governments must base their decision-making on health and medical advice, and we need to see that advice and whether it supports today’s decision. If it doesn’t, the politicians need to explain themselves,” Robson said.

“As many as 30 percent of people are likely to still be infectious on days six and seven—even longer. When isolation rules change, we need clear plans for protecting the vulnerable and careful monitoring, and if case numbers climb, then the isolation rules should be re-evaluated.”

Robson is concerned that the changes could create more issues for public hospitals that are already struggling under what he termed a “logjam” from “staff shortages, further exacerbated by the number of COVID positive cases presenting.”