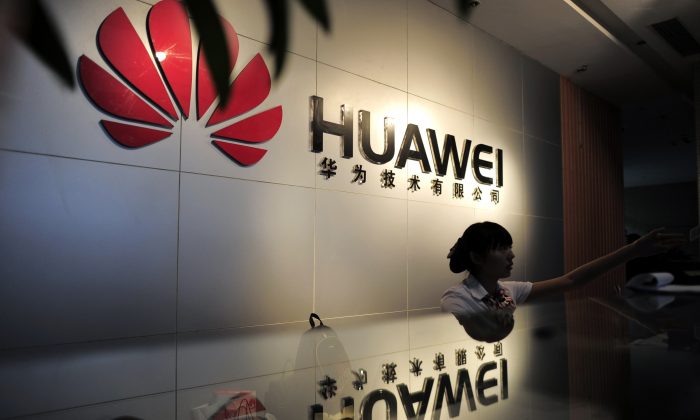 A receptionist at the office of Chinese telecommunications firm Huawei in Wuhan City, China on Oct. 8, 2012. (STR/AFP/Getty Images)
Australia

SYDNEY—Australia must restrict some firms from providing equipment for its 5G mobile communications network because it is such critical infrastructure, the head of the domestic intelligence agency said, helping to explain why China’s Huawei was banned.

Australia expanded its national security rules in August to include telecommunication equipment suppliers, an order that prevented Huawei Technologies Co Ltd from participating in the country’s forthcoming domestic broadband network.

Australia said the decision was needed as some companies answer to foreign governments, an assertion that soured bilateral relations between Canberra and China.

“5G technology will underpin the communications that Australians rely on every day, from our health systems and the potential applications of remote surgery, to self-driving cars and through to the operation of our power and water supply,” Mike Burgess, director-general of the Australian Signals Directorate, said in rare public comments late on Oct. 29.

“A potential threat anywhere in the network will be a threat to the whole network,” he said in a speech that did not mention Huawei or any other firms by name.

A spokesman for Huawei did not immediately respond to requests for comment. The company has previously denied it answers to Beijing.

Western intelligence agencies have raised concerns for years that Huawei, the world’s largest maker of telecommunications network gear, is beholden to the Chinese government, raising the risk of espionage.

The United States in August restricted access for Huawei and compatriot ZTE Corp to its lucrative market for similar reasons.

Australia previously banned Huawei from providing equipment for its fiber-optic network and moved to block it from laying submarine cables in the Pacific.

Although widely expected, the move added to tensions in bilateral ties as Canberra had previously accused China of meddling in its domestic politics, which soured trade ties.

5G Providers Have Ties to the Chinese Communist Party

According to a report by The Epoch Times, Huawei’s Founder Ren Zhengfei used to be a part of the People’s Liberation Army (PLA) and still runs this company today.

Western intelligence agencies have long been concerned that Huawei is connected with the Chinese Communist Party (CCP) and that their products were made with spying capabilities.

Nokia maybe viewed with the same kind of suspicion when they signed an agreement with China Huaxin for a joint venture. The joint company’s website, Nokia Shanghai Bell, displays the “Hammer and sickle,” the Communist Party symbol.

Professor Clive Hamilton, author of Silent Invasion: China’s Influence in Australia, had a word of caution about the perception of trust that Huawei has tried to create in Australia.

“Although it is not a state-owned company, it would be naive in the extreme to believe a company that with government support turned itself into the world’s second-biggest telecommunications equipment maker … did not have daily links with China’s intelligence services.”

The Epoch Times reporter Alan Cheung contributed to this article