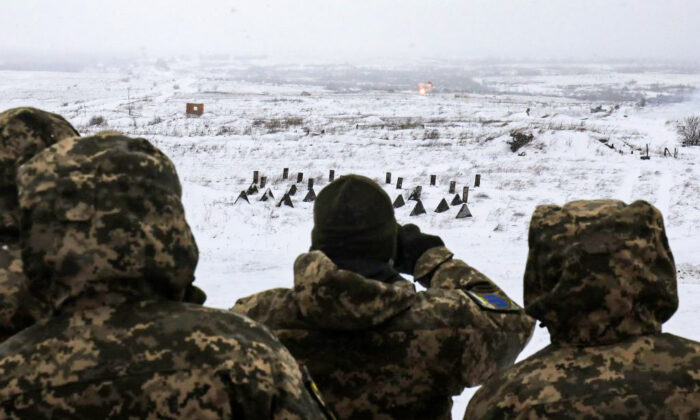 Ukrainian Military Forces servicemen attend a military drill with Next generation Light Anti-tank Weapon (NLAW) Swedish-British anti-aircraft missile launchers at the firing ground of the International Center for Peacekeeping and Security, near the western Ukrainian city of Lviv on Jan. 28, 2022. (AFP via Getty Images)
Australia

The Australian government has temporarily suspended the operations of its embassy in Kyiv, Ukraine, and ordered the evacuation of remaining staff, citing a “deteriorating security situation,” given the build-up of Russian troops at the border with Ukraine.

Prime Minister Scott Morrison on Feb. 13 said his government has instructed the remaining three staff members at the Australian embassy to move to a temporary office in Lviv in western Ukraine near Poland. Other Australian staff and their families have already departed.

“The situation is deteriorating and is reaching a very dangerous stage,” he said.

“I want to send a very clear message on behalf of Australia—a liberal democracy who believes in freedom and the sovereignty of states, not just in Europe but in our own region as well—that the autocratic, unilateral actions of Russia to be threatening and bullying Ukraine is something that is completely and utterly unacceptable.”

Morrison also condemned Beijing for its continued silence on the Ukraine issue, after China criticized the meeting of foreign ministers of the United States, Australia, Japan, and India in Melbourne on Feb. 11. The diplomatic network, known as the “Quad,” was established to counter the Chinese regime’s escalating aggression and efforts to increase its influence in the Indo-Pacific region.

“Yes, the Chinese government is happy to criticize Australia for engaging in such peaceful activities but yet remains chillingly silent on Russian troops massing on the Ukrainian border,” Morrison said.

“The coalition of autocracies that we are seeing, seeking to bully other countries, is not something that Australia ever takes a light position on.”

“Security conditions could change at short notice. Russian military action in Ukraine will severely limit our ability to provide consular assistance to Australians,” she said.

“We remain in close contact with our Five Eyes [intelligence alliance] and other like-minded partners on the ground.”

Opposition Leader Anthony Albanese told Sky News that “the threats and intimidation that’s occurring to a sovereign state like the Ukraine are entirely inappropriate in 2022” and that Russia should “back off.”

“We respect Ukraine’s sovereignty, and that should be respected by all, including Russia,” he said.

It comes as the U.S. State Department ordered an evacuation of most U.S. direct-hire employees from the U.S. Embassy in Kyiv and urged Americans in Ukraine to leave immediately.

At the same time, the Biden administration is moving thousands of troops into Eastern Europe, including 1,700 paratroopers from the 82nd Airborne Division and a squadron from the 2nd Cavalry Regiment.

The Kremlin has denied any plan of invading Ukraine.

AAP and Allen Zhong contributed to this report.