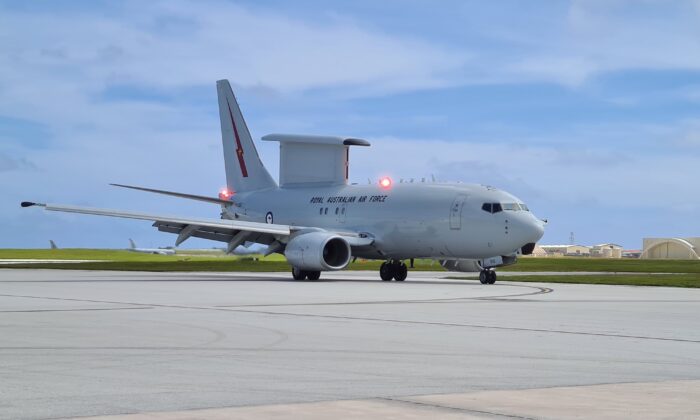 A Royal Australian Air Force E-7A Wedgetail aircraft from No. 2 Squadron taxiing at Andersen Air Force Base in Guam after returning from a mission providing battlespace management to coalition aircraft over the skies of the western Pacific Ocean during Exercise Cope North 2021. (Squadron Leader Lino Schewenke/ADF)
Australia

The Royal Australian Air Force (RAAF) and the United States Air Force (USAF) will come together with Japan’s air self-defence force for Cope North 2022 military exercises in Guam in February.

The trilateral drills are set to run from Feb. 2 to 18 and will focus on enhancing interoperability between the RAAF, the USAF, and Japan’s Koku-Jieitai air self-defence force.

This will be the first joint military exercises between Australia and Japan since the two signed a historic defence agreement at the start of January.

The reciprocal agreement—Japan’s only such pact—increases the interoperability between the Australian Defence Force and Japan’s Self-Defence Force, including for humanitarian response purposes.

During Cope North 22, the allies will work to increase interoperability through combined tactics, techniques, and procedures for providing humanitarian and disaster relief.

It will also provide an opportunity for pilots from the trilateral forces to practice in environments with a large number of aircraft operating at once.

“We are very pleased to be heading back to Guam for Cope North 22, which will provide invaluable experience for our personnel and enhances the effectiveness of the RAAF,” said Group Captain Andrew McHugh, the RAAF Task Unit Commander.

“Through Cope North 22, we are focused on deepening relationships and strengthening engagement with the USAF’s Pacific Air Force and the Koku-Jieitai, to contribute to our shared vision of an open, inclusive and resilient Indo-Pacific.”

“Cope North 22 will enhance the tri-lateral forces’ capability for HADR in the Indo-Pacific, ensuring a highly effective and professional response, when needed,” McHugh said.

“We are committed to developing an intelligent and skilled workforce with exercises such as Cope North providing the opportunity to operate as a combined force with the United States and Japan, and ensure our people can deliver airpower when required.”