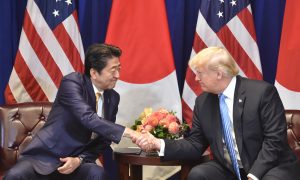 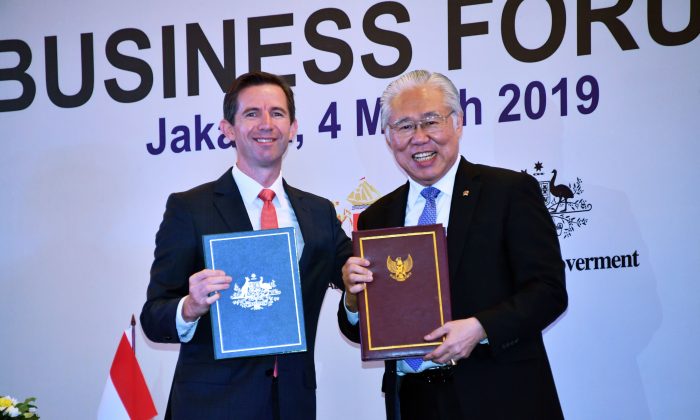 A trade deal between Indonesia and Australia has been hailed as sending a timely signal to the world about the importance of free trade.

As the Indonesian and Australian trade ministers signed the agreement in Jakarta on Mar. 4, Labor leader Bill Shorten promised to study the detail as his party weighed up whether to lend parliamentary support.

The opposition leader says Labor is “positively disposed” towards the trade pact, which must be ratified by parliament after its formal tabling, and an inquiry by the treaties committee.

“We’ll have to study the detail, as you always do—we want to make sure that Australian jobs are prioritised—but we’re very positive from what we’ve seen so far,” Shorten told reporters in Melbourne.

Both countries are in the world’s top 20 economies but not each other’s top 10 trading partners.

This is Indonesia’s first major agreement of its type and will allow Australian-owned universities to operate in the country.

Trade Minister Simon Birmingham said the deal would eliminate tariffs in relation to 94 per cent of tariff lines.

“That covers 99 per cent of Australia’s current trade with Indonesia,” he said in Jakarta.

The Business Council of Australia and National Farmers’ Federation are both celebrating the trade deal.

“This is an important agreement for a large developing country like Indonesia, and it demonstrates both Australia’s and Indonesia’s commitment to rules-based global trade at a time when the voices against freer and more liberal trade are increasingly loud,” Business Council chief Jennifer Westacott said.

Unions fear it will hurt Australian jobs by opening the floodgates to exploited Indonesian workers and undermine national sovereignty by allowing international rulings on investment disputes.

The ACTU has branded it a “dodgy deal” that favours temporary visa holders, while the head of the manufacturing workers’ union says there’s no substantive evidence the deal will benefit Australian workers.

Shorten said the unions were entitled to their views, but he would look at the “total national interest.”

Labor has supported a string of recent free trade deals signed by the coalition.

Even still, Prime Minister Scott Morrison has warned that the opposition is the only thing standing in the way of the latest agreement.

“The Labor Party has often baulked on these arrangements in the past, so that would be the only risk to it as far as I can see,” he told reporters in Sydney.

The trade deal was meant to be signed last year but was delayed when the prime minister floated the idea of moving Australia’s embassy in Israel.

What’s in it for Indonesia?