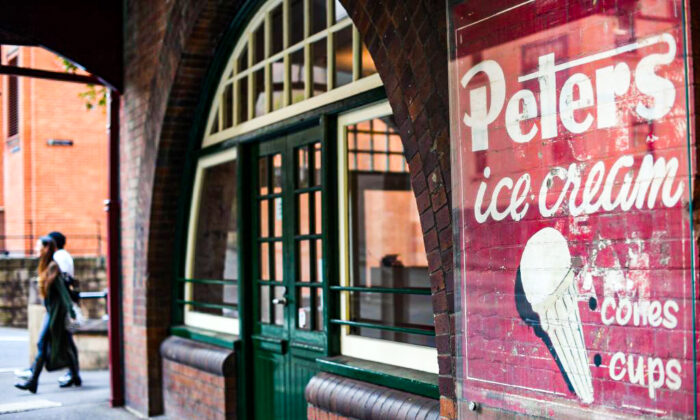 An iconic Australian brand Peters ice cream, dating back to the 19th and early 20th centuries, in the central business district of Sydney on Sep. 21, 2017. (Saeed Khan/ Getty Images)
Australia

Iconic Australian brand Peters Ice Cream has been fined $12 million (US$9 million) for trying to freeze out competitors by stopping them from being sold at service stations and convenience stores throughout Australia for five years.

Peters Ice Cream admitted to acquiring the largest ice cream distributor in Australia—Processed Fish Distributors (PFD)—on the condition that they wouldn’t sell any competing ice creams without getting written permission.

PFD allegedly made requests to distribute competing ice creams to petrol and convenience stores, but these requests were rejected by Peters.

The food distributor is able to reach more than 90 percent of the country’s postcodes.

The national consumer and competition watchdog announced on March 25 that the federal court action it had brought against the company had succeeded.

“This is an important competition law case involving products enjoyed by many Australians,” Australian Competition and Consumer Commission (ACCC) Chair Gina Cass-Gottlieb said in a statement.

“We took this action because we were concerned that Peters Ice Cream’s conduct could reduce competition in this market and impact on the choice of single-serve ice creams available to consumers.”

Peters Ice Cream, the manufacturer of Connoisseur, Drumstick, and Proud & Punch, is one of two major manufacturers of single-serve ice cream products sold in Australian fuel stations and convenience stores.

The court also ordered the ice cream company to pay a portion of the ACCC’s legal costs.

“Peters Ice Cream admitted that if PFD had not been restricted from distributing other manufacturers’ ice cream products, it was likely that one or more potential competitors would have entered or expanded in this market,” Cass-Gottlieb said.

“This case is a reminder to all businesses of the serious and costly consequences of engaging in anti-competitive conduct.”

The ACCC is targeting exclusive arrangements by firms with market power that impact competition as one of its compliance and enforcement priorities for 2022/23.