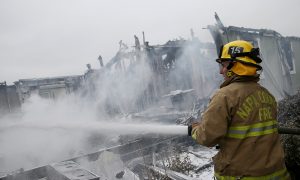 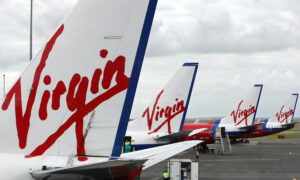 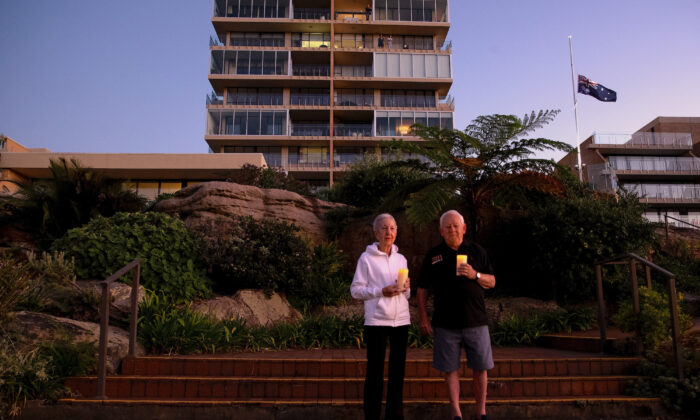 Ken and Jeanette Foster pay their respect outside their home in Fairlight on April 25, 2020 in Various Cities, Australia. (Cameron Spencer/Getty Images)
Australia

Australians participated separately—but together in spirit—to mark Anzac Day on April 25, one of the most important national occasions that honours veterans and service members.

In the early morning of the Australian national holiday, people participated in a dawn time vigil in driveways across the country amid government restrictions on gatherings due to the global CCP virus pandemic.

The hashtags #AnzacAtHome and #AnzacDay were frequently used on Twitter by those who participated in the event.

Channel 9 sports presenter Erin Molan posted a photo on the social media network of her neighbour participating in the dawn vigil.

Took this from my balcony this morning… the silhouette of the hat got me good 🙏😢… such an emotional dawn service 🙏 #lestweforget #anzacathome #lightupthedawn pic.twitter.com/lzrHvp0nDx

Shout out to those who got out in Mount Lawley this morning. A wonderful experience. An honour to play the last post this morning. #AnzacAtHome #AnzacDay2020 pic.twitter.com/VfMO0UOyBL

Proud father Dan Sandiford shared photos of his son, an Air Force cadet, as they observed the dawn vigil outside their home whilst his daughter played “The Last Post” on her violin for the neighbourhood.

He wrote, “#Quarantine didn’t stop us from commemorating our fallen #soldiers on #AnzacDay.”

“For us, it was a #poignant connection to our #fallenheroes who fought for our freedom,” he added in a second message.

In this moment of #isolation, we were able to #reconnect with the greater body of #Australians and the broader #humanity.#LestWeForget #AnzacatHome pic.twitter.com/6CbX68Gcjd

Whilst ANZAC day may look different this year, I’m glad to see the ANZAC spirt lives on in our rural communities. A time to reflect, to be grateful and thankful for what we have. Lest we forget #AnzacAtHome #gorural @RuralDocsVIC @RuralDoctorsAus pic.twitter.com/8H99rZ5Z6p

On Anzac Day we remember the Australians and New Zealanders who served in war and on operational service. The spirit of Anzac with its qualities of courage, mateship, and sacrifice are now part of our national identity. Lest We Forget. #AnzacAtHome #AnzacDay2020 #Anzac2020 pic.twitter.com/iRXKidR4lm

The first organised Anzac Day dawn vigil is thought to have formally begun in 1928, a year after a group of returned servicemen came across and joined an elderly woman to lay flowers on what later became the Sydney Cenotaph, according to the Australian War Memorial.

Anzac day is traditionally commemorated with a dawn service held during the time of the original Gallipoli landing, as well as ceremonies and parades throughout the day. But “this year it will look a little different,” the Australian War Memorial noted.

This year, the National Ceremony, a commemorative service during Anzac day, was a smaller affair held on Saturday morning, April 25, at the Australian War Memorial in Canberra.

Usually, the day includes a veteran’s march, a commemorative address, laying of the wreaths, hymns, and a bugle call of “The Last Post” which is followed by observing a minute’s silence, as well as the national anthems of Australia and New Zealand.

The Royal Australian Navy shared on Twitter a video of the Warrant Officer of the Navy reading the poem “The Ode,” which was followed by the sound of a bugle playing “The Last Post,” to commemorate soldiers who died at war.

The Ode is read by the Warrant Officer of the Navy, WO-N Deb Butterworth for #AnzacDay2020. The Ode is followed by the playing of The Last Post. #lestweforget #anzacathome #standatdawn #ausnavy pic.twitter.com/LEh2lAKW22

“The Ode” is taken from a section of “For the Fallen,” a poem by the English poet and writer Laurence Binyon which was published in 1914. Health minister Greg Hunt shared “The Ode” on Twitter on Saturday morning.

They shall grow not old, as we that are left grow old;
Age shall not weary them, nor the years condemn.
At the going down of the sun and in the morning
We will remember them.#AnzacDay2020 #AnzacAtHome pic.twitter.com/YcXgfrRM7p

The Australian War Memorial called on Australians to commemorate Anzac Day from home. The group on Twitter posted a link to its website to provide people with tips on activities they can do with their family and friends.

The National Commemorative Service has now concluded. We call on all Australians to continue to commemorate the Anzac spirit throughout the day. There are many activities you can do with your family and mates on our website. https://t.co/JZnpkzJjZl#AnzacDay #AnzacAtHome pic.twitter.com/lA4t8vx2PW