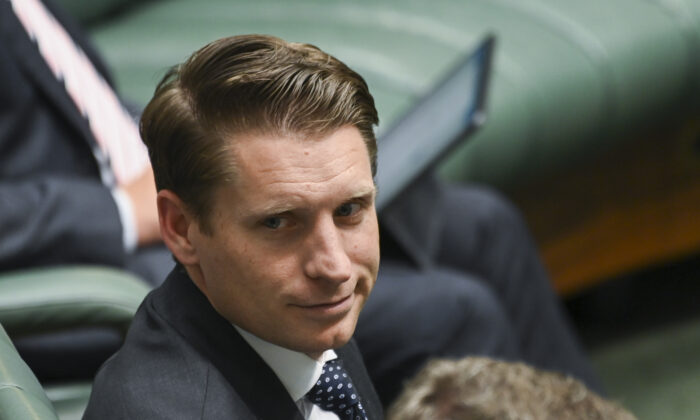 Australia’s shadow defence minister has called on the West to “see China with clear eyes” as he warned Australia’s “greatest vulnerability” is its failure to recognise the communist regime’s “fundamentally different vision for the world.”

Andrew Hastie on Sunday said that Australia is in an “immensely difficult” position where it can neither forsake its closest allies, the United States, nor turn away from its largest trading partner, China.

Hastie added that Australia has “failed to recognise how mobile our authoritarian neighbour has become” and ignored the role that ideology plays into China’s actions across the Indo-Pacific region. For example, Australia keeps using its own categories to understand China’s actions, such as its motivations for building ports and roads, rather than those used by the Chinese Communist Party (CCP), he said.

“The West has made this mistake before. Commentators once believed Stalin’s decisions were the rational actions of a realist power,” Hastie said.

“Right now, our greatest vulnerability lies not in our infrastructure, but in our thinking. That intellectual failure makes us institutionally weak.”

Read More
Appeasement of the CCP?

The shadow defence minister warned that the West and the Chinese communist regime has “a fundamentally different vision for the world” and urged Australia to be “intellectually honest and take the Chinese leadership at its word.”

“Xi’s view of the future is one where capitalism will be eclipsed and ‘the consolidation of and development of the socialist system will require its own long period of history … it will require the tireless struggle of generations, up to 10 generations.'”

“If we don’t understand the challenge ahead for our civil society, in our parliaments, in our universities, in our private enterprises, in our charities—our little platoons—then choices will be made for us. Our sovereignty, our freedom, will be diminished.”

Meanwhile, Australian Foreign Minister Penny Wong on Aug. 5 called out China for its “destabilizing” live-fire drills near Taiwan, noting that Australia will monitor the situation closely.

On Aug. 4, China launched live-fire military drills in the seas surrounding Taiwan, which was seen as a campaign of military coercion against the island in apparent retaliation for U.S. House Speaker Nancy Pelosi’s (D-Calif.) visit.

The CCP declared six exclusion zones encircling the island for its war games. Warplanes and vessels crossed the median line of the Taiwan Strait that separates Taiwan from mainland China.

Calling the military drills “highly provocative,” Taiwan’s defense ministry said that Chinese military jets and warships had been seen in waters near Taiwan on Aug. 4, with some crossing the median line. Also known as the Davis Line, the median serves as an unofficial air and maritime buffer between China and Taiwan.