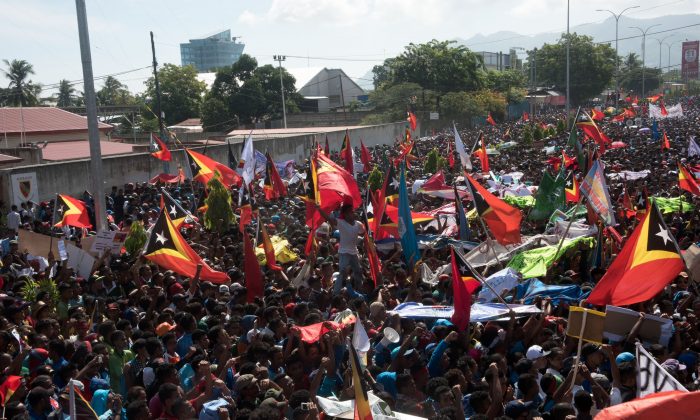 The fields are located approximately 450 kilometres (280 miles) northwest of Darwin and 150 kilometres south of Timor-Leste. It is estimated to be worth around $70 billion (US$50 billion) and holds around 226 million barrels of gas.

The trip comes days after Australian Foreign Minister Penny Wong visited the pacific nation on Aug. 31 following public comments from Ramos-Horta that if the deadlock can not be fixed, his country would turn to China.

“Timor-Leste would favourably consider a partnership with Chinese investors if other development partners refuse to invest in bringing gas via pipeline to Timor-Leste,” Ramos-Horta told The Guardian.

“Timor-Leste would be on a financial cliff if Greater Sunrise is not operating within the next 10 years. So, very soon, leadership has to make decisions … if necessary, a trip to China.”

Wong initially responded to Ramos-Horta’s comments during a joint press conference in Dili on Sept. 1 with Timor Leste Minister of Foreign Affairs Adaljiza Magno, by saying the government should engage in quieter diplomacy and avoid using the media for leverage.

She said that the Australian government recognised that Greater Sunrise was “an extremely important project for Timor-Leste,” and it was “important to recognise, the joint venture partners will need to come to an agreement for that project to proceed.”

“So, that’s Timor Gap, Woodside, and Osaka Gas. And, as yet, that hasn’t happened,” she said. “I’ve said to the president and to others, we need to unstick it, we need to see how a way through can be found. What I would say is that will be best done respectfully and directly—not through the media.”

Wong has signalled that the Albanese government understood that Greater Sunrise was a critical issue for the East Timorese government as the country is about to face serious economic challenges after their preexisting energy fields run dry, which is predicted to occur sometime at the end of the year.

“They face some pretty serious economic challenges as revenue from an existing field runs out (this year), which will mean much less revenue for their government,” she told ABC radio.

“We need to engage and discuss so that … we can find a way to unstick it. I think that would be in the best interests of East Timor.”

“Australia is committed to supporting Timor‑Leste’s economic development,” Albanese said. “This visit will be an opportunity to further deepen this relationship and explore avenues for strengthened cooperation both bilaterally and in the region.”