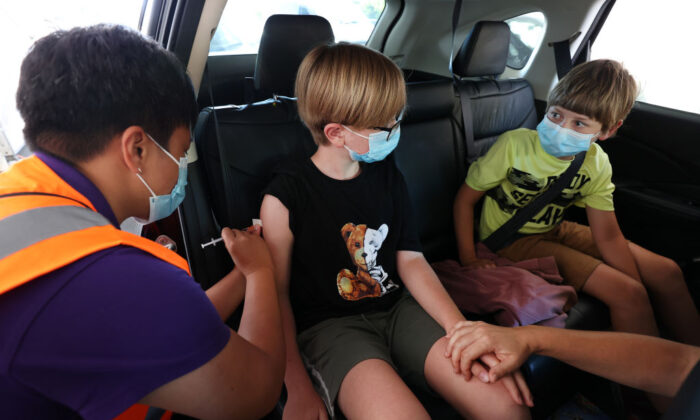 An 11-year-old boy is vaccinated as his brother looks on in support at the drive-through vaccination centre at North Shore Events Centre in Auckland, New Zealand, on Jan. 17, 2022. (Fiona Goodall/Getty Images)
Australia

Australian federal Health Minister Greg Hunt has flagged the possibility that children aged zero to four may become eligible for a COVID-19 jab, prompting a warning from One Nation Senator Malcolm Roberts.

The extension is partly to ensure the federal government is prepared “should medical advice recommend additional population groups be vaccinated, such as children aged zero to four-years,” according to a release on March 29.

Expressing full confidence in the safety and efficacy of the available COVID-19 vaccines, the federal government plans to spend more than $1 billion between 2022 and 2024 to enable Australians to get access to them.

This was concurrently when the vaccination rate climbed towards 90 percent of the entire eligible population.

However, while not against the extension of the vaccination program, One Nation Senator Malcolm Roberts said he is opposed to “any attempt to mandate these vaccines and extend the use of these vaccines to infants and toddlers.”

He warned fellow parliamentarians that any harm caused by the vaccines on young children would be on their hands.

“We oppose totalitarianism and we oppose control over people,” Roberts told Parliament on March 30.

Roberts accused the incumbent Liberal-National coalition government of trying to sneak through its plans to jab children aged four and under while the public is distracted by the upcoming federal elections.

“Clearly, this Morrison-Joyce government … is intending on using the cover of the election to vaccinate infants and toddlers for a disease with a 100 percent survival rate for a child that age,” he said.

“The injections are known to be killers, and now the Morrison-Joyce government wants to push it into babies.”

Roberts is among a minority of elected officials, from different conservative parties, pushing back against federal and state government mandates for COVID-19 vaccines, which he characterises as an attribute of “totalitarianism.”

Instead, he has continuously called for Australians to have the freedom to choose whether to get a COVID-19 jab and for the public and private sectors to accept those choices without waving a Sword of Damocles over their livelihoods.

In fact, the authors of a peer-reviewed paper published in the Toxicology Reports journal titled “Why are we vaccinating children against COVID-19?” wrote that “for children the chances of death from COVID-19 are negligible” but that “the chances of serious damage over their lifetime from the toxic inoculations are not negligible.”

This paper, along with a list of peer-reviewed studies related to COVID-19 vaccine adverse events in children, is compiled on the website of Dr. Robert Malone, a virologist and immunologist who has contributed significantly to the technology of mRNA vaccines.

Malone issued a warning to parents while speaking to EpochTV’s American Thoughts Leaders program in January, calling on them to “think twice” before they give their kids one of the available mRNA COVID-19 jabs.

“Because if something bad happens, you can’t go back and say, ‘whoops, I want a do-over,’” Malone said.

He also said: “It is clear that parents should think twice about vaccinating their child,” adding that serious adverse events can occur and can be “so severe that it puts your child in the hospital.”

Malone noted that with regard to myocarditis, or inflammation of the heart, “there’s a good chance that if your child takes the vaccine, they won’t be damaged, they won’t show clinical symptoms—[but] they may have subclinical damage.”

But he cautioned parents against the risks of taking the chance that their child may “draw the short straw” and suffer “irreversible” damage, noting that he receives emails from parents going through it.

Australia offers two non-mRNA COVID-19 jabs, AstraZeneca and Novavax, but these are not approved for children.

The Pfizer mRNA jab remains the only option available for children who are aged five to 11. Meanwhile, the Moderna jab is an alternative option for children aged six to 11.

Due to the waning effectiveness of the jabs, children are recommended to get two doses of a vaccine. The interval between shots for children aged five to 11 is eight weeks. But this can be shortened to three weeks for Pfizer, and four weeks for Moderna, under special circumstances.