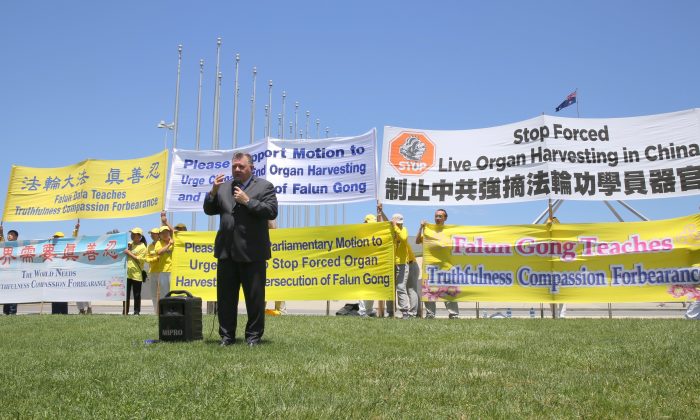 Mr Craig Kelly, member of parliament for Hughes, speaks at Capital Hill spoke to the rally about "why I have been proud to be co-chairmen of the Parliamentary group against forced organ harvesting.” Canberra, Australia, Nov. 21, 2016. (Linda Zhang/Epoch Times)
Asia & Pacific

On November 21, hundreds of Australian Falun Gong practitioners rallied in front of Capital Hill in Canberra to raise awareness of the ongoing human rights abuses perpetrated against their fellow practitioners in China since 1999. The rally put focus on murder for organs in China, and called for Australian politicians to support bringing an end to forced live organ harvesting and the persecution of Falun Gong by Chinese Communist Regime.

Banners calling for support from the Australian public and displaying the principles of the practice, Truth, Compassion and Tolerance, lined both sides of Commonwealth Avenue through the city centre and around Capital Hill.

The report concludes that as many as 60,000 to 100,000 transplants have been taking place in China from the year 2000 to the present with the source being non-consenting prisoners of conscience; primarily Falun Gong. This puts the likely death toll of Falun Gong practitioners from forced organ harvesting in the region of 1.5 million over the past 15 years.

The emcee of the rally, Mr John Deller said: “What Falun Gong practitioners are doing is not protesting; they are only trying to tell the truth.”

Forced organ harvesting goes against everything we in believe in.
— Craig Kelly, member of parliament.

MP Craig Kelly spoke at the rally, sharing about a business trip he took to China a decade ago. He explained how most of the tourist brochures in his hotel contained a leaflet inside defaming Falun Gong in poor English. It took him 10 years to work out why the Chinese communist Government did this. Once he understood the truth of Falun Gong, he said: “I’ve always stood with you since then. That’s why I have been proud to be co-chairmen of the Parliamentary group against forced organ harvesting … doing something to stop it.”

Mr Kelly told Epoch Times that David Kilgour had held a briefing inside parliament house, introducing new evidence and explaining some of the latest findings on this human rights abuse.   “We want people to donate their organs freely. But having a system where people are forced to have their organs harvested without consent … truthfully, this goes against everything we believe in. It is something we need to speak out against in our free and democratic parliament.”

Kelly said the introduction of a motion to the House of Representatives is underway. “We will make sure that it will go to parliament, and we will make sure it is bipartisan.”

Kelly said the motion condemning forced organ harvesting will be introduced early in the New Year.

He also mentioned that he had a good hearing with parliamentarians that morning, but he said there are a lot of members of parliament who have yet to learn the truth of the matter before the Australian government will place a ban on Australians going to China for organs.

“What happened to the Jewish community is different from what’s happening to Falun Gong community. Not even Adolf Hitler would murder people and sell the organs to wealthy residents from Germany or China.” He said.

“A lot of people know what’s happening now, it’s better to stop it. Australia, Canada and all who believe in human dignity have to get this stopped. Please continue what you’re doing.”