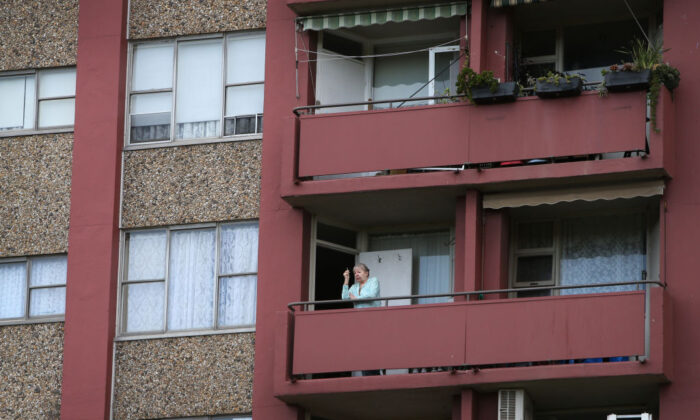 A resident stands on a balcony of a public housing apartment in Redfern in Sydney, Australia, on Sept. 16, 2021. (Lisa Maree Williams/Getty Images)
Australia

The Grattan Institute has said in their latest report that Australia is experiencing a housing crisis, where citizens are now spending a greater proportion of their income on housing than in the past.

The think tank called on the federal government to create a Social Housing Future Fund to finance new social housing stock, which is falling in proportion to all dwellings.

According to its analysis, the number of social housing in Australia has barely grown in the last 20 years, while the population grew 33 percent. The proportion has therefore fallen from 6 percent in 1991 to less than 4 percent now.

“More poorer Australians are having to rent in the private market,” Brendan Coates, the economic policy program director at Grattan Institute, wrote. “The median low-income social renter pays 24 percent of their income on rent, compared with 37 percent for the typical low-income private renter.”

In October 2020, Housing Minister Michael Sukkar told The Age that the delivery and construction of social housing was the responsibility of the state and territories, a statement that Coates believes is “not without basis.”

He also notes that more social housing alone will not solve Australia’s housing crisis and proposed a 40 percent boost to Commonwealth Rent Assistance.

“This would be a fairer and more cost-effective way to reduce financial stress and poverty among poorer renters,” Coates said.

A separate report by the Australian Council of Social Service (ACOSS) and the University of New South Wales also called on the federal government to relieve rental stress for low-income households through boosting the Rent Assistance scheme by 50 percent.

“We need the Federal Government to step up and step back into this space and do some heavy lifting to both address the massive social housing shortfall and meet the future needs of a growing and aging population,” ACOSS CEO Cassandra Goldie said.

Shadow Minister for Housing Jason Clare said rent had “skyrocketed” across the country to become the biggest bill that many Australians pay and struggle to keep up with.

Clare said an elected Labor government would establish a Housing Australia Future Fund for 30,000 social and affordable homes around the country.

The Epoch Times reached out to Sukkar’s office for comment but did not receive a response in time for publication.