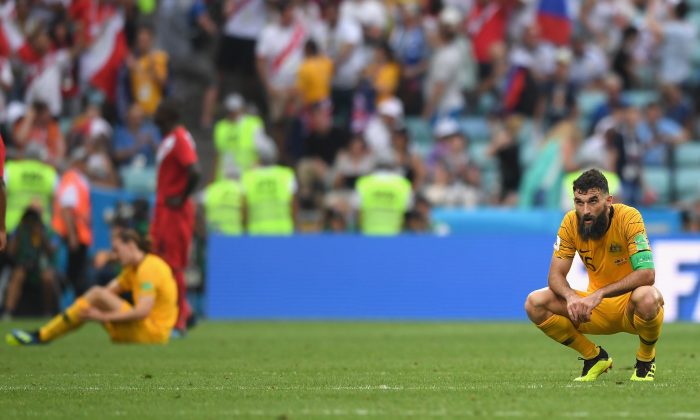 SOCHI, Russia—Bert van Marwijk’s short reign as Australia coach came to a bittersweet end as his side were beaten 2-0 by Peru to finish bottom of Group C, but the Dutchman was still looking on the bright side as he departed the World Cup.

Appointed in January and out of a job now that their tournament is over, the coach praised his team and said a lack of good fortune and some poor officiating was to blame for Peru’s 2-0 win, their first World Cup victory in 40 years.

“We are not lucky, because the first goal in my opinion was offside, and the second goal was a very lucky goal, so we don’t have luck in all three of the (group) games,” he told a news conference.

“We played against France, Denmark and now Peru, and I think in all three of the games we gave a good performance, and this team has really improved from the day I started working with them.”

Ultimately it was a lack of firepower that stopped the Socceroos from progressing. Van Marwijk even introduced veteran Tim Cahill off the bench, but the talismanic 38-year-old couldn’t add to his five goals in his three previous World Cups.

“Against France, in football we were at least equal with France, and with Denmark even better, and today I have the same feeling,” Van Marwijk said.

“But in all three of the games, we couldn’t make a difference in goals. That’s something this squad misses on this level.”

Van Marwijk said he was leaving the job with no regrets.

“I loved to work with Australia and the players, but I’m also very happy that I’m free again,” he said.

SBS football commentator Craig Foster slammed the result in his post-match analysis, saying “there is no question that we could have done more.”

“We haven’t learned from the last four years and we’ve come here and… according to the style of play the guys executed it extremely well, but Australia is capable of more,” he said.

“We threw out an entire plan of four years and went with a completely different strategy and, in the end, we should be looking at it and saying, ‘when we went at these teams we showed what we could do, but we didn’t do it enough’.”

“The biggest issue is not about van Marwijk, it’s about us—we have to decide how we’re going to approach these tournaments.”