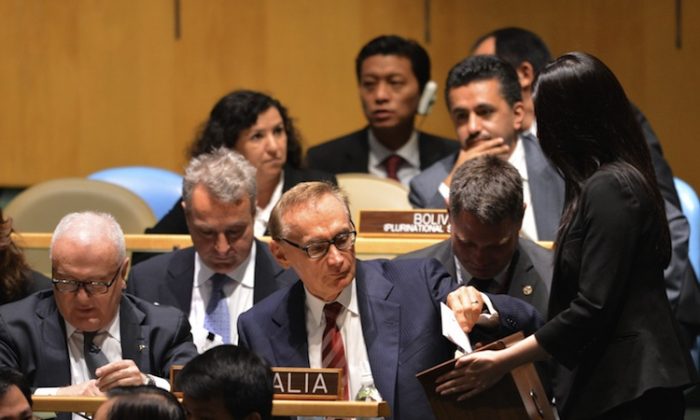 Australia's Foreign Minister Bob Carr (C) casts a ballot during the United Nations General Assembly session October 18, 2012 as they the vote for five countries to become non-permanent members of the Council. Australia became one of them. (Stan Honda/AFP/Getty Images)
International

Australia has been elected to the 15-member United Nations Security Council, as have Rwanda and Argentina, as voting continues to fill two more vacant seats.

The U.N. General Assembly elected Australia with 140 votes, over Finland and Luxembourg on Thursday, for the first of two seats in the Western European and Others (WEOG) group. Luxembourg and Finland received 128 votes and 108 votes respectively.

Argentina, unopposed in its region, took the Latin American and Caribbean states’ seat.

Rwanda, also unopposed, was selected to represent the Africa seat despite concerns raised this week by a the Security Council Expert Panel that Rwandan Defence Minister General James Kabarebe is commanding a rebellion in neighboring Democratic Republic of Congo, Reuters reported.

The Security Council, is made up of five permanent members—the United States, United Kingdom, France, Russia and China–and 10 non-permanent members, five of which are replaced alternately every two years.

Luxembourg and Finland will now compete in another round of voting for the second WEOG seat.

In a close race, Cambodia, Bhutan, and South Korea, are competing for the one available Asia-Pacific seat.