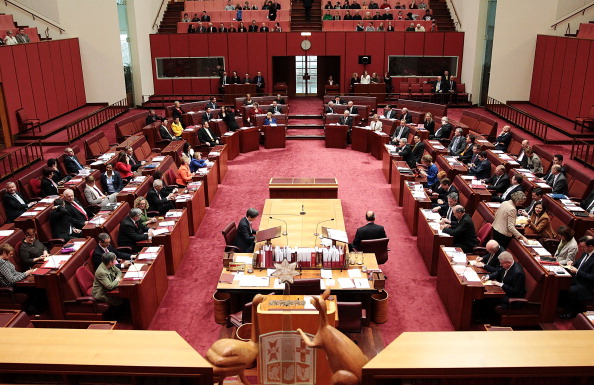 The Australian Senate votes on a new President of the Senate at Parliament in Canberra, Australia, on July 7, 2014. (Stefan Postles/Getty Images)
Asia & Pacific

SYDNEY—Successful negotiations to axe the carbon and mining taxes were finally achieved this week, but questions have been raised about what it will take to pass the budget.

The removal of the carbon and mining taxes was part of the the Palmer United Party (PUP) platform, but after a fortnight of twists and turns in what the Government had thought would be easy streets, passing the contentious budget looks a long way off. Political pundits are now wondering if a double dissolution is on the horizon.

Revenue raising measures in the budget, like the co-payment for medical services and tax, education and welfare reforms are areas that have been contested, not only by PUP and wily leader Clive Palmer, but also new senators from the micro-parties.

“At what point does the Government say our entire program and economic plan is being frustrated and we need to go back and seek a fresh mandate,” Professor Clem Macintyre, political analyst at the University of Adelaide, said in a phone interview.

That frustration was evident July 16 when Treasurer Joe Hockey threatened to take money from elsewhere if budget measures were not passed.

“There are alternatives for a government,” he added.

The continual failure to pass a combination of measures in the budget could also trigger a double dissolution. This would require an election in both houses, the House of Representatives and all of the Senate, not just half as in a normal election.

It would also ensure the budget measures were passed as both houses would vote jointly on the measures, but only those measures which triggered the double dissolution. Even if the Government does not gain the numbers in the Senate, the combined vote should ensure safe passage of those bills.

Greens leader Christine Milne challenged Tony Abbott to go to another election in June during the last weeks of the old Senate. The Greens and Labor had voted against abolishing the Clean Energy Finance Corporation (CEFC).

But the Government was then confident of the new Senate.

“Just because you’re given a trigger, it doesn’t mean you have to…pull it,” Foreign Minister Julie Bishop said in response.

Ms Bishop harked back to the contested Senate of the previous Labor Government. “I think the Australian people…were sick and tired of the instability and the uncertainty that was the hallmark of the last at least five years.”

After seeing their agenda unravel over the last fortnight, the first sitting of newly elected senators, a double dissolution may have more appeal.

As tempting as it may be, the Government has a number of hurdles to cross before it can take Australia to the polls again.

Number one is the Government’s unpopularity. Support for the Coalition and the Prime Minister fell dramatically after the budget in May. The Government’s primary vote dropped to 36 per cent and Tony Abbott’s approval rating to 31 per cent, where they remain according to a July 14 Federal Newspoll.

In two-party terms, the Labor party holds an election winning lead over the government, 54 per cent to the Coalitions 46 per cent.

While polls can and do change dramatically, the second hurdle is to change Senate voting practices.

A joint parliamentary committee recommended the reforms following the 2013 election when micro parties were accused of “gaming the system”. Using a complicated system of preference deals, crossbenchers – Senate members independent of the major parties – were installed with miniscule proportions of the vote.

Victorian Ricky Muir of the Australian Motoring Enthusiast Party, for example, was elected with just 0.51 per cent of the primary vote, considerably less than nine other contenders including PUP, the Sex Party, Wikileaks Party and the Shooters and Fishers Party. In South Australia, Family First’s Bob Day was elected with 3.76 per cent of the primary vote.

Supported by the Coalition, Labor and the Greens, the reforms ensure that voters, not the minor parties, will determine where their preferences go.

Parties will also be required to have 1500, rather than the present 500, members and show proof of their uniqueness to that party.

Senate voting reforms are unlikely to curry favor with the crossbenches. While the Palmer United Party should survive, a number of the other micro-parties will see the writing on the wall, said Professor Macintyre.

“The crossbenchers will see that [the change to Senate voting processes] for what it is and their hostility toward the government would grow,” he said.

The Federal Parliament is expected to adjourn for a winter break July 17 and will return Aug 26.