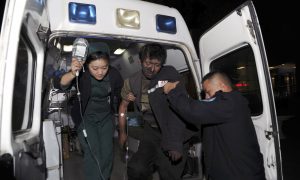 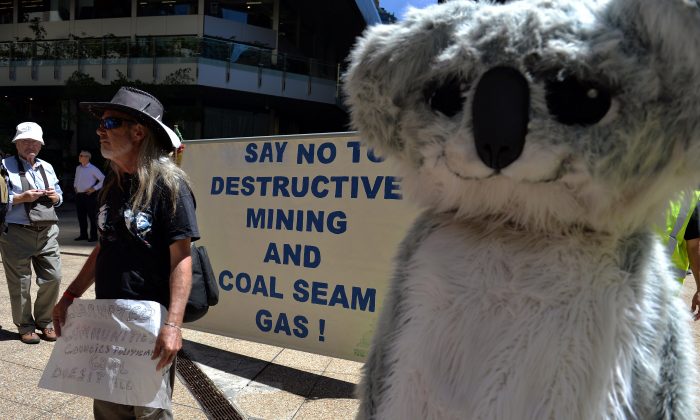 Protesters hold placards and banners during a rally against Whitehaven Coal in Sydney on February 20, 2014. (Saeed Khan/AFP/Getty Images)
Asia & Pacific

SYDNEY—Coal mining on the rich farming lands of the Liverpool Plains is shaping up to be a major issue in the New South Wales elections March 28.

Approval for the Chinese-owned Shenhua Watermark coal mine was to be finalised March 13, but Federal Environment Minister Greg Hunt has delayed the start of the project. He announced Feb 27 an independent study will be completed on the region’s groundwater safety before the final go ahead.

The delivery date for the study’s results is unspecified, prompting Greens Senator Larissa Waters to cry politics after her Senate motion to ban coal and coal seam gas mining on the Liverpool Plains was rejected.

“The vote today indicates that federal Coalition has extended the Shenhua approval date so that it’s after the election, not because of concern about water impacts,” she said in a statement on March 3.

“I think that has been done as a straight political move, to move it away from the election,” he said in a phone interview.

Premier Mike Baird has one of the highest approval ratings of any current state or federal politician, but the Coalition has been rattled following the routing of Queensland’s Liberal National Government in January.

Mr Baird viewed the proposed mine site for the first time this week, but made no promises. Mr Duddy said the visit was a “good thing”, but expressed concern that the premier, a city dweller, has little understanding of rural communities or the mine’s significance.

The Plain’s agricultural strength lies not only in the soil, but also in its megalitres of alluvial groundwater replenished naturally via aquifers throughout the year. The quantity and quality of the water allows a rare winter and summer growing season, producing crops 40 per cent above the national average, according to the Australian Bureau of Agricultural and Resource Economics and Sciences (ABARES).

Mr Duddy says Shenhua appears to have done little research on groundwater impact, a surprising oversight, given that earlier studies have suggested that aquifers are intricately connected to each other – any threat to one aquifer may pose a threat to others.

“It is something that needs a lot more work prior to development so we don’t end up with any disasters,” he said.

State owned Shenhua, is one of a number mining companies active in the area but the Chinese mine will be the largest project. Over 250 million tonnes of coal—and virtually the entire Watermark mountain— is predicted to be removed over its 30 year life.

Advocates for the mine say it will bring much needed jobs to regional centres and revenue to state coffers. Agriculture and mines can co-exist they argue, but many farmers are concerned about environmental and health impacts.

“The health impacts of coal mining concern me, particularly the health of my two boys,” says Kirrily Blomfield, whose family raises grass-fed beef.

She says she and her neighbours feel they are caretakers of the land and work hard to sustain and regenerate the soil. Now they fear for their livelihood.

“The future of some of the richest, best farming land in Australia is at risk, it should ring alarm bells with any Australian,” she told Epoch Times.

Battle lines against coal mining in the region were first drawn in 2006 when BHP was granted an exploration licence. The mining giant planned to develop an underground “long wall” coal mine in the Caroona area south of Gunnedah.

The company ran headlong into resistance from farmers concerned about the impact on aquifers. In 2008, when Shenhua announced plans for open cut mining, alarm bells really began to ring.

BHP had paid the State Government $100 million for its exploration licence, but Shenhua paid a landmark $300 million, with the promise of $375 million if approval was granted.

“That is a pretty big incentive,” Ms Blomfield said.

The fact that both licenses were granted by Ian Macdonald , the disgraced former Labor Mining and Primary Industries Minister, added to the concern. Mr Macdonald was prosecuted by the Independent Commission Against Corruption (ICAC) last year for corruptly issuing lucrative mining licences in the Hunter Valley.

Mr Duddy would like to see a Royal Commission into Mr Macdonald’s activities. He says he “has no idea” what was promised but wonders whether, with the amount of money involved, Shenhua was led to believe environmental concerns were not a problem, “and it was all going to be roses”.

“It is a totally inappropriate process,” he said.

Shenhua has said they will restrict mining to just the Watermark ridge but few believe that.

“History tells us, as with lots of other mines, that [companies will] initially put in for a mining licence with certain parameters, and then they put in for extensions. And more often than not, those are approved,” Ms Blomfield said.

Word is also out that the Liverpool Plains are the next big thing for coal mining, despite significant environmental and health concerns.

“The Hunter Valley coal mines are closer to the end than the start of their life and the often used analogy is that if you placed a 50 cent piece on a dinner plate, the coal reserves in the Hunter are the coin and the Gunnedah Basin is the plate,” says property website NextHotSpot.

Agriculture Minister Barnaby Joyce, the Federal member for the Liverpool Plains, has expressed sympathy for the farmers, but stated at an ABARE conference on March 3 that without coal “we go broke”.

His comments come as mining giants Gina Rinehart and Andrew Forrest up their investments in agriculture, claiming demand for food from China was creating new opportunities.

Mr Joyce and state representatives Kevin Anderson, both members of the National Party, are copping flack for not doing more to support farmers. Mr Duddy suspects the issue will play out in the state election.

“People are absolutely furious and disheartened by the contempt with which they are being treated,” he said.