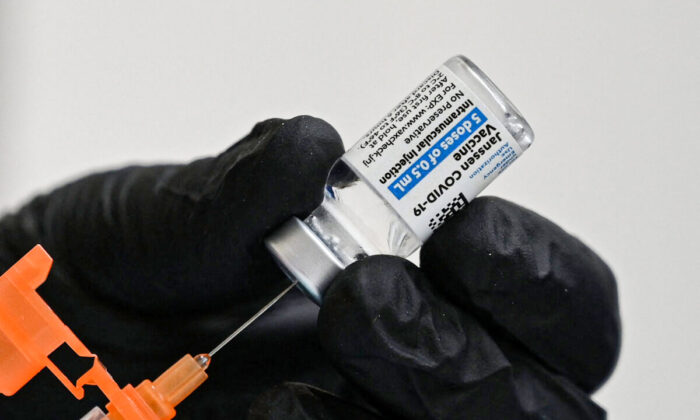 A nurse fills a syringe with the Johnson & Johnson COVID-19 vaccine at a clinic in Pasadena, Calif., in a file photograph. (Robyn Beck/AFP via Getty Images)
Australia

Australians will be eligible for a third dose of a COVID-19 vaccine earlier after the nation’s immunisation body recommended a shorter time frame.

Health Minister Greg Hunt announced on Friday that from Jan. 4, booster shots will be brought forward to four months after the second dose, from five months currently.

Then from Jan. 31, people who have had their two doses can get their booster after three months.

States and territories are slowly reintroducing restrictions and updating how they trace and isolate positive cases as infections soar across the country.

Compulsory mask-wearing is now in place across almost every state and territory after NSW Premier Dominic Perrottet backflipped on his anti-mandate position on Thursday.

NSW will also reintroduce QR codes in all settings from Dec. 27, when hospitality venues will return to the one person per two-square metre rule.

It comes after the state hit a new record of 5,715 daily infections on Thursday, up almost by 2,000 on the previous day. That number fell slightly to 5,612 on Friday.

Victoria has also reintroduced a mask mandate, ahead of the state reporting 2,095 cases on Friday.

Western Australia Premier Mark McGowan followed the lead of the two biggest states after a backpacker tested positive on Thursday after being infectious in the community for a number of days.

High risk, large public events in WA will be cancelled and dancing has been banned except at weddings.

“I know this is not the news we wanted to hear two days before Christmas, but unfortunately this is the reality of COVID-19,” McGowan said.

Queensland reported 369 new daily infections on Thursday while South Australia had 484, Tasmania 26 and the Northern Territory 10.

The ACT also recorded a new daily case record with 85 new infections, prompting the territory to update its definition of a close contact.

There are also growing calls for the federal government to make rapid antigen tests available for free amid concerns of more case number spikes over the Christmas break.

Long queues at testing clinics around the country this week prompted calls for a rethink of entry requirements in states like Queensland, which demands a negative PCR test prior to arrival.

Queensland will move to allow rapid antigen tests ahead of travelling. but not ahead of the new year.

Opposition leader Anthony Albanese wants the federal government to do more on the rapid testing front.

“I don’t think anyone should be excluded from getting a rapid antigen test because of their income,” he said.

While the federal government has put in free rapid testing measures at residential aged care facilities, it has resisted calls by doctors to make the tests free universally.