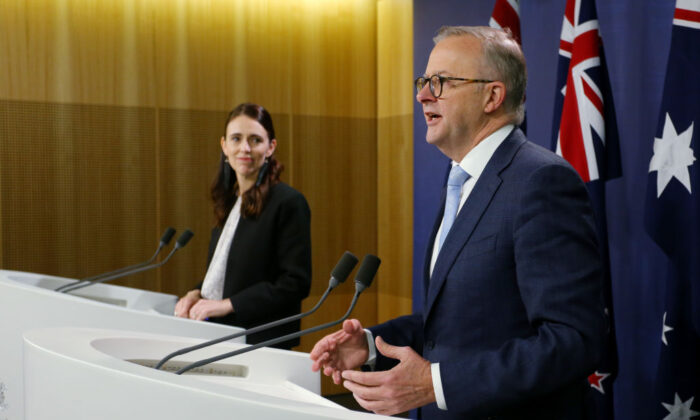 If implemented, it would align Australia’s voting policy with New Zealand—where Australians living across the Tasman for more than one year are able to vote.

“We’ll be asking the Joint Standing Committee on Electoral Matters to consider whether there’s a way to return to systems that have existed in the past of giving New Zealand people who are here in Australia, contributing to society, paying taxes, working, voting rights here in Australia as well,” Albanese said during the Australia-New Zealand leaders’ meeting on July 8.

The Australian prime minister said he would not “pre-empt” the process but would have the position examined.

New Zealand Prime Minister Jacinda Ardern said her country had long argued that “New Zealanders are Australia’s best migrants” and was asking for greater recognition of that fact.

“No New Zealander or Australian should be rendered permanently temporary,” she said at the meeting in Sydney. “That is a step-change in the way that we’ve previously seen New Zealanders treated here.”

Ardern noted that according to the census, around 30 percent of Kiwis obtained Australian citizenship compared to the 60 percent rate of other nationalities.

“So that demonstrates some of the barriers that exist,” she said.

The two prime ministers have committed to work through this issue, among others, and aim to put forward proposals by Anzac Day in 2023, according to Ardern.

Albanese also indicated his willingness to relax the 501 visa deportation policy, which has been one of the most contentious issues in the Australia-New Zealand relationship.

He said the 501 visa cancellation policy will continue to exist and deportations will continue “when appropriate,” however, he would review the more problematic cases.

“Where you have a circumstance where someone has lived their entire life, effectively, in Australia with no connection whatsoever to New Zealand, common sense should apply and we will act friends and we will work through those issues in a common-sense way,” Albanese said.

Migrants in Australia can be deported on 501 policy grounds after failing a “character test” for being involved in criminal activity.

Ardern previously said her government was not asking Australia to remove its deportation policy but reconsider the deportation of people with no connection to New Zealand and Kiwis who have stayed in Australia for so long that they were “essentially Australians.”