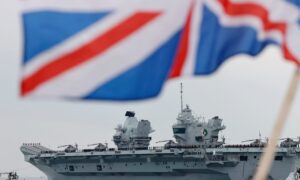 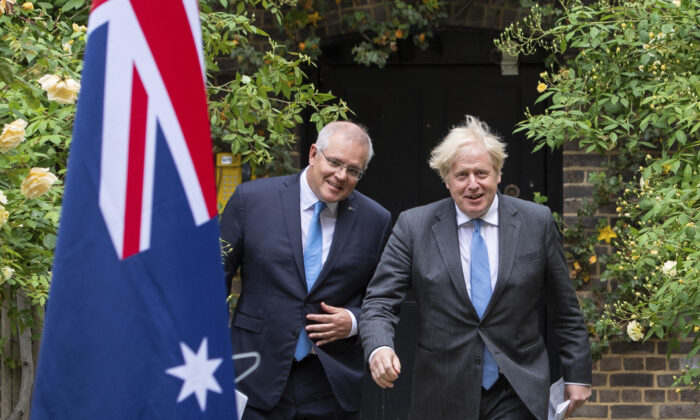 LONDON—Britain and Australia announced the broad outlines of a free trade deal Tuesday, eliminating tariffs on a wide range of goods as the UK seeks to expand links around the world following its exit from the European Union.

The pact is expected to boost exports of traditional British products such as Scotch whisky, while boosting imports of lamb and wine from Australia. Crucially for Britain, it will also reduce barriers to trade in financial and other services. The UK hopes the deal will help it join the trans-Pacific trade partnership, which would open the door to increased trade throughout the Asia-Pacific region.

It is the first trade deal Britain has negotiated from scratch since it left the EU. Earlier deals with countries including Japan and Canada were built on existing agreements struck by the EU.

British Prime Minister Boris Johnson appeared outside his Downing Street office with his Australian counterpart Scott Morrison on Tuesday, to highlight the benefits each country would receive from the deal and stress the long ties between the two nations.

“This is an ambitious free trade agreement,” Morrison told reporters. “This is not a standard cookie-cutter agreement. This is an agreement with great ambition for both countries.”

While both leaders were effusive in praising the benefits of the deal, details were limited. The UK said a final agreement in principle would be published “in the coming days.”

Australian farmers may be one of the big beneficiaries of the deal as agricultural goods account for about 14 percent of the country’s total exports. That has raised concern among British farmers, who fear they won’t be able to compete with cheap imports from Australia, which has different rules on animal welfare and environmental protection than the UK.

UK farm groups reacted with caution, saying they were waiting to see the details of the agreement.

“The ultimate test of this trade deal will be whether it contributes to moving farming across the world onto a more sustainable footing, or whether it instead undermines UK farming and merely exports the environmental and animal welfare impact of the food we eat,” National Farmers Union President Minette Batters said in a statement.

Johnson defended the deal, saying tariff-free agricultural imports would be capped for 15 years to protect UK farmers. The government also said it would seek to increase agricultural exports to Asia and the Pacific.

“I want everybody to understand that this is a sensitive sector for both sides and we’ve got a deal that runs over 15 years and contains the strongest possible provisions for animal welfare,” Johnson said. “But I think it is a good deal, and I think it’s one that will benefit British farmers and British consumers as well.”

Former Australian trade negotiator Dmitry Grozoubinski, who now runs the Geneva-based consultancy ExplainTrade, said the significance of the deal may be in the benchmark it sets for the future.

British farmers “should probably be far more concerned about what comes next in terms of what kind of precedent it sets for future trade deals than Australia specifically,” he told the BBC.

Johnson’s government has been focused on negotiating free trade deals around the world in an effort to boost economic growth following Brexit. The biggest prize would be the United States, which also has a large export-focused agricultural industry.

While the debate over agricultural products has garnered most of the attention during negotiations over the free-trade deal, the provisions governing professional services may have a bigger impact on the British economy.

Australia imported 5.4 billion pounds ($7.6 billion) worth of services from the UK last year, making it the 10th largest market for Britain’s service industry. Services account for about 80 percent of the UK economy.

“It is encouraging to see services recognized in the (Free Trade Agreement), and going forward we are confident there will be continued momentum to strengthen ties in financial and professional services specifically,” said Catherine McGuinness, policy chair for the City of London Corp., which represents the UK financial services industry.