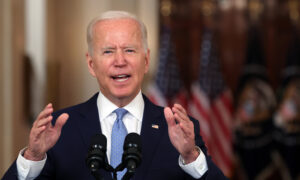 Australia, Britain, and the US Close Ranks Against China

Australia, the United Kingdom, and the United States (AUKUS) just took a huge step in the right direction toward deterring China’s aggression.

On Sept. 16, President Biden announced that the United States and Britain would assist Australia in acquiring nuclear-powered attack submarines. The submarines will be equipped with nuclear-capable cruise missiles, though not with the nuclear weapons themselves. Australia will purchase similar cruise missiles for its air force.

Biden also announced a new closer AUKUS alliance between the three countries, which tend to be tougher on the Chinese Communist Party (CCP) than the other two members of the Five-Eyes alliance, Canada and New Zealand. AUKUS could thus be an important new core from which a broader anti-CCP alliance system could grow.

While currently only conventional explosives are planned for Australia’s new cruise missiles, they prepare the country down under with the delivery systems necessary to achieve an independent nuclear deterrent at some point in the future. Other major democracies in Asia, including Japan, South Korea, and Taiwan, should take the same steps in order to achieve what should be considered the nuclear containment of China through a ring of nuclear democracies. The CCP’s power and aggressiveness is growing so quickly, that anything less risks, over the next several decades, an end to democracy in Asia, if not the world.

Beijing reacted badly to the news, with China’s foreign ministry spokesman saying that the three countries have an “outdated cold war zero-sum mentality.”

But the regime should instead reflect on its mistakes. Democracies will not go quietly as Xi Jinping tries to use his outsized military to simultaneously capture new territory from Taiwan, India, Japan, and the claimant countries of the South China Sea: the Philippines, Vietnam, Indonesia, Malaysia, and Brunei. Xi is apparently listening to his yes-men as he walks toward a nuclear disaster for himself, and for the world.

Already in Washington, there is concerned talk of an American nuclear first strike against China’s growing forces. This would obviously be a disaster for all involved. But American building toward that capability, with highly accurate missiles that could target China’s nuclear missile silos, is a Reagan-era strategy that in part brought down the Soviet Union. The Soviet leader Mikhail Gorbachev could not compete at that level, and so took an offramp toward openness and democracy in the late 1980s.

China should take note. The United States has proven, historically, that it will rigorously defend the freedom of itself and its allies. To decrease the risk of nuclear escalation, China should stop acting in a belligerent manner toward its neighbors. This is important to the United States and its allies, because if Beijing succeeds in taking territory from its neighbors, China will become more powerful and emboldened to take yet more territory. The more powerful Beijing becomes, the more it threatens the United States and Europe.

Democracies around the world are realizing this, and are planning to nip the Chinese regime’s latest aggressions in the bud through modernizing their weapons systems. Democracies, which are more technologically sophisticated than China, better compete on the nuclear level. China better competes in terms of conventional military power given its massive population and industrial base.

Taiwan and Japan reacted positively to the news of AUKUS cooperation on a nuclear submarine for Australia, given that it strengthens the network of democratic alliances that seek to contain China.

A spokesperson for Taiwan’s president said, “Keeping the Indo-Pacific free and open is not just important for the security of neighboring countries like Taiwan, it’s essential for today’s interconnected global economy. So broader involvement by members of the international community is a positive and necessary trend for peace and stability in the region.”

Japan’s former foreign and defense minister, Taro Kono, who is likely to succeed Prime Minister Yoshihide Suga, said that Japan should also partner more closely with allies to deter China’s military aggression. “We very much welcome that the UK is once again turning its eyes to the Pacific region,” he told reporters. “It is extremely important for Japan to work closely with these three countries.”

South Korea is also in the process of modernizing its military in the face of aggression by not only China, but North Korea. Seoul has for years pursued nuclear propulsion for its submarines, but the United States wrongly hampers its supply of uranium required as a power source. Now that the United States is supplying Australia with highly enriched uranium (HEU), it should provide the same to South Korea. Both are equally valued allies. South Korea always has the option of enriching its own HEU if necessary for its nuclear deterrent and long-lasting submarine fuel.

On Sept. 15, South Korea successfully tested its first submarine-launched ballistic missile (SLBM). The test proves that should Seoul decide to go nuclear, it already has the necessary delivery systems. The president’s office released a statement that said, “Possessing a SLBM has significant meaning in securing deterrence against omnidirectional threats, and it is expected to play a key role in building self-defense capability and peace on the Korean peninsula.”

The AUKUS agreement should be seen as part of an Australian response to Beijing’s nuclear saber rattling as recently as last May. Hu Xijin, the editor-in-chief of Global Times, a nationalist mouthpiece of the CCP, then threatened “long-range strikes on the military facilities and relevant key facilities on Australian soil,” in an article that included a photo of a Chinese nuclear-capable H-6 bomber.

In a short-sighted fashion, Paris also reacted badly to the news, as it included the cancellation of Australian plans to spend $90 billion on 12 diesel-electric submarines produced in France. Japan also bid on that contract, but lost to France in 2016.

Diesel-electric submarines cannot stay at sea as long, and are approximately three times slower than nuclear-powered submarines. Nuclear submarines are priced in the billions of dollars each, compared to the hundreds of millions that their diesel-electric counterparts cost.

France’s foreign and defense ministers released a joint statement that read, “The American choice to exclude a European ally and partner such as France … shows a lack of coherence that France can only note and regret.”

However, France and some other European allies, notably Germany, have at times been too close to Russia and China in their sharing of technology and markets. They have not sufficiently invested in their own defense, weighting social services too heavily given the multiplying global threats from China, Russia, Iran, North Korea, and terrorism. This European softness has led the continent to overly rely on the United States for deterrence of Russia, even as they undercut that deterrence through commercial profligacy in Moscow and Beijing. This is no longer tenable given the rise of China and America’s pivot to Asia. Europe will now have to increase its own defense expenditures to deter Moscow. This should include the creation of a European Union army.

Australia’s conservative prime minister, Scott Morrison, said that today’s agreement was the biggest defense policy initiative since Australia allied with the United States in 1951. He described the agreement as a “forever partnership … between the oldest and most trusted of friends.” Morrison said that he would purchase cruise missiles for Australia’s navy and air force. The naval missiles will be Tomahawks, which are produced in the United States.

The U.S., British, and Australian agreement is the first step toward an independent nuclear deterrent for Australia. But the rest of the journey needs to be completed, by not only Australia, but Japan, South Korea, and Taiwan. Beijing must hear the democracies loud and clear: We fully intend to defend ourselves.