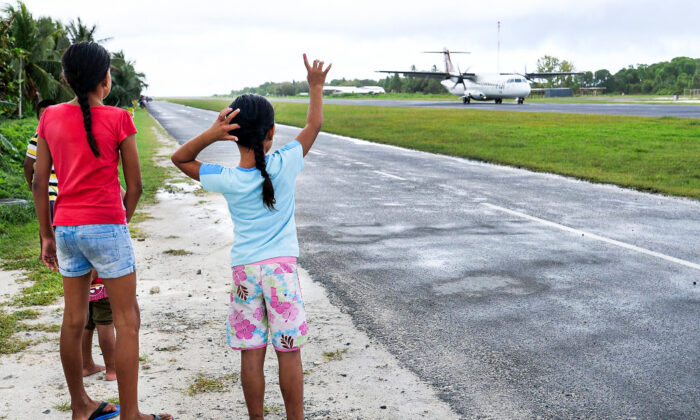 People gather at the airport three times per week to welcome and farewell passengers from Fiji in Funafuti, Tuvalu, on Aug. 15, 2018. (Fiona Goodall/Getty Images)
Australia

The Australian federal government and major telecommunications firm Telstra have pulled the trigger on a $1.6 billion (AU$2.1 billion) takeover of a dominant South Pacific mobile telecom business amid ongoing concerns that Beijing could step in and deepen its foothold in the region.

The government and Telstra announced on Oct. 25 its decision to acquire Digicel Pacific, which provides mobile and network services across Papua New Guinea, Nauru, Samoa, Vanuatu, Tonga, and Fiji—some of Australia’s closest neighbors.

Currently, Beijing has strong relations with many Pacific island nations.

The deal will see the Australian government do most of the initial heavy lifting, financing $1.33 billion (AU$1.7 billion) of the asking price via its export credit agency, Export Finance Australia. Telstra will contribute $270 million (AU$361 million) and will own 100 percent of Digicel Pacific upon completion of the deal.

“Digicel Pacific has been a successful and growing telecommunications provider in the Pacific for the past 15 years,” the statement reads. “Telstra’s acquisition sends an important signal about the company’s potential and about wider business confidence in the future of the Pacific region.

“The acquisition also reflects the government’s commitment, as part of its Pacific Step-up, to support the development of secure and reliable infrastructure in the region, which is critical to the Pacific region’s economic growth and development.”

Andy Penn, CEO of Telstra, said the deal was a “unique and very attractive commercial opportunity.”

“With 1,700 employees and around 2.5 million subscribers from retail customers through to large enterprises, Digicel Pacific is the number one telco in Papua New Guinea, Nauru, Samoa, Tonga and Vanuatu, and number two in Fiji,” he said in a statement, noting that the business generated $233 million in revenue in the financial year ended on March 31.

Australia’s move comes amid concerns that a Chinese state-backed enterprise such as China Mobile could swoop in and acquire the business, which was founded in 2006 by Irish entrepreneur Denis O’Brien. Countries such as Papua New Guinea sit just 150 kilometers north of the Australian mainland, sparking unease from defense experts that it could give Beijing a hub to carry out surveillance activity targeting data networks.

The move into the region’s mobile network market is a new one for Telstra, according to Rob Nicholls, associate professor of regulation and governance at the University of New South Wales.

He noted that the deal was “unusual” because the government was paying a substantial portion of the purchase price.

“The Australian government is providing a subsidy for the balance. The effect is that taxpayers are subsidizing Telstra’s acquisition with no liability on Telstra to repay the difference,” he told The Epoch Times on Oct. 25.

“It’s unlikely that this will be a ‘white elephant.’ … In effect, the cost of borrowing for Telstra will be the risk-free rate, and the Commonwealth will get a return that is comparable to a bond issue.”

Nicholls noted that Telstra was approached because it was one of the largest Australian-owned telecoms in the country, with its largest competitors, Optus and Vodafone, being foreign-owned.

Michael Shoebridge, defense director at the Australian Strategic Policy Institute, said the deal to buy Digicel Pacific is important for bolstering Australia’s influence in the region.

The South Pacific has been at the center of an ongoing tug of war between democratic allies and the regime in Beijing.

The Chinese Communist Party has used several initiatives to win support from Pacific Island leaders, including infrastructure building via the Belt and Road Initiative (BRI), vaccine diplomacy, and trade opportunities.

The response from Pacific nations has varied, with some countries embracing ties with Beijing and others outright rejecting it.

In July, Samoan Prime Minister Fiame Naomi Mata’afa stood by a pledge to scrap a BRI port development near the nation’s capital worth $100 million, saying that the project was too big for the island’s needs.