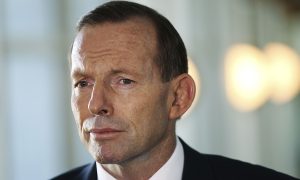 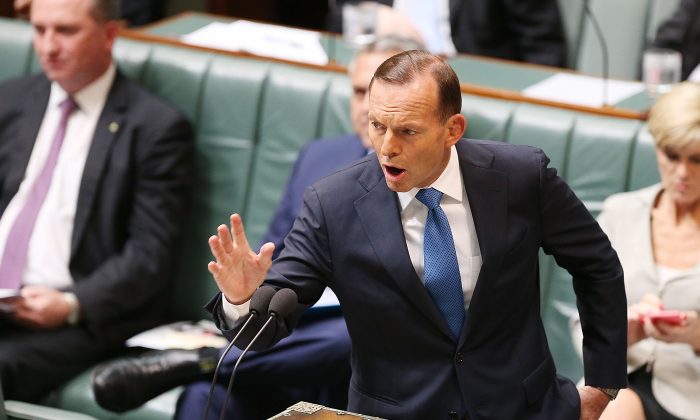 Prime Minister Tony Abbott during House of Representatives question time at Parliament House, on Dec. 4 in Canberra, on the official last day of sitting at Parliament for 2014. Parliament will return on Feb. 9, 2015. (Stefan Postles/Getty Images)
Asia & Pacific

Australia: Back to the Drawing Board for Coalition Over Xmas

SYDNEY—It is not unusual for a government to flounder in their first term. But political analysts say the Coalition Government will require a strategic rethink to repair the damage.

The Coalition had a strong election win in September last year but has experienced an unusually short honeymoon, struggling ever since to maintain the public’s support and falling to new lows in the polls as end of year approaches.

The latest Ipsos Fairfax poll, published on Monday Dec 8, has Labor leading the Coalition in a two party preferred basis 52 to 48 per cent.

Clem Macintyre, professor of politics at the University of Adelaide, says the Government has failed to connect with voters and convince them that it knows what it is doing.

“Most first term governments struggle to get their head around the demands of government and their sense of purpose established,” he said in a phone interview. “This one is experiencing a significant delay in achieving that.”

A number of budget initiatives have been criticised as inequitable and some have accordingly stalled in the Senate where they remain, even as the 2015 budget looms.

“They didn’t make the case on the need for extensive economic reform and to the extent they did, the pain that fell across parts of the community was not seen to be evenly and fairly distributed,” he said.

Professor Clive Bean, political scientist at the Queensland University of Technology, says the Government’s pain is a result of the way it goes about its business. He says they failed to foreshadow proposals like university fee hikes and the GP co-payment, creating an understandable backlash.

“There has been a sense of arrogance in the Government’s approach, arguing that they need to have measures passed come hell or high water, and a reluctance to negotiate and compromise,” he said.

The Prime Minister’s standing is also a problem. After years of being chief attack dog in opposition, Tony Abbott has been unable to improve his position. While the Ipsos poll indicated support for the PM on foreign policy and economics, he lags well behind Bill Shorten on six of 11 key attributes including trustworthiness, competence, support from own party, openness to ideas, and understanding of social policy.

Mr Abbott also concedes little about his government’s weaknesses and continues to deny that election promises have been broken.

“For the Government to be pretending that it hasn’t, is a bad look among voters,” Prof Macintyre said.

Prof Bean says Mr Abbott’s ideological position as a conservative and his perceived insensitivity to budget cut effects has not endeared him to the general populace and remains a hard sell.

“That reinforces that perception that he is further to the right and further against ordinary working people and people that are struggling than some of his predecessors,” he said. “They will find that hard to shake.”

While it does not look good for the Government going into the Xmas break, it has plenty of room—and time—to improve.

One area that is likely to be tweaked is Cabinet. Treasurer Joe Hockey and Defense Minister David Johnston have been rumoured to be candidates for removal, but Mr Abbott may hesitate to remove key ministers.

The Government does need to rethink strategies, however, and look at new ways to engage with voters, says Prof Macintyre. In that respect changes to the front bench could be effective, particularly recruiting junior ministers and younger back benchers who are more in tune with voters and can articulate concerns more effectively.

“The Government can only benefit from hearing that range of concerns,” he said.

There are also rumours that Communications Minister Malcolm Turnbull may be elevated, despite concerns his popularity poses a threat to Mr Abbott. Treasurers are commonly the least popular minister, which may suit Mr Abbott’s purposes, says Prof Bean.

“Even when the Government is doing fairly well, the Treasurer is the one whose standing is usually pretty low so it is possible Tony Abbot could play a game of ‘well, I will deal Turnbull the bad card of Treasury,” he said.

Prof Macintyre believes Mr Abbott’s best bet is to focus on getting the economy in order.

“Abbott is clearly not a popular and charismatic leader, therefore he has to trade on the need for hard decisions and defending those hard decisions.”

Labor and Bill Shorten have fared well in opposition but it is some way off before they are considered a serious alternative. In the meantime, it is the minor parties that are gaining attention.

South Australian independent Senator Nick Xenophon announced Dec 7 that he is forming his own party.

The Nick Xenophon Team, or NXT, will represent the “sensible centre of politics” he said in announcing the move.

A major force in South Australia, Xenophon had no where else to go as an independent and his success will likely depend on the quality of candidates say analysts.

“Whether forming a party will be the making of him or the beginning of the end for him is a question we will only be able to see over time,” said Prof Bean.

Although the independents and the minor parties, particularly the colourful Palmer United Party, have proved unpredictable, the ability of Government to work with them will be critical in 2015.

“The Government will be trying to negotiate very strongly with some of the minor players in the Senate to help get their measures through,” said Prof Bean. “Perhaps they will [now] negotiate in a more conciliatory way.”