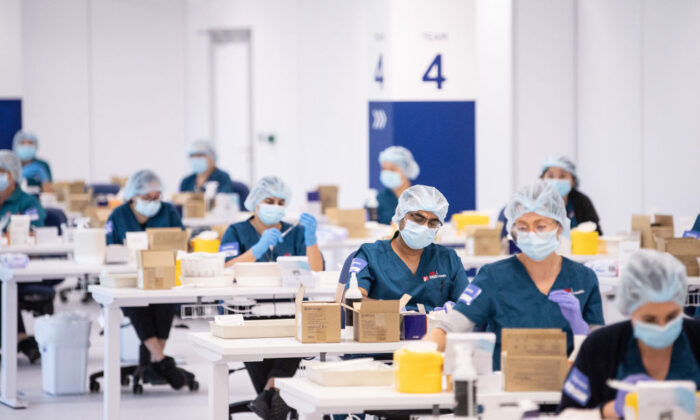 Staff prepare COVID-19 vaccines in the pharmacy area at the Olympic Park Vaccination Centre in Sydney, Australia, on May 10, 2021. (James Gourley/Pool/Getty Images)
Australia

Australia Approves Boosters For 16 And Over

The Australian Technical Advisory Group on Immunisation (ATAGI) have approved booster shots for teens aged 16 and above, effective Feb. 3.

Teenagers will be receiving the same dosage as adults and the recommended booster interval period is also three months after the primary doses.

Health Minister Greg Hunt welcomed the news saying it was good news for the many Australians returning to school this week.

“Teenagers have made many sacrifices throughout this pandemic; their social and educational lives have suffered through lockdowns and restrictions, along with the impact on their mental health and wellbeing,” Hunt said.

“It is critical for their health and wellbeing to be able to engage with their friends and get back into school activities.”

Currently, adolescents aged 16 to 17 already have a vaccination rate of 91 percent and now, more than 60 percent of them are eligible to receive their booster shots.

Hunt encouraged all teenagers to complete their primary dosages and to “come forward for their boosters,” he said on Sunrise on Feb. 3.

Immunocompromised adolescents aged 16 to 17 years of age who have received a third primary dose of COVID-19 vaccine are recommended by the ATAGI to receive a fourth booster dose of the Pfizer vaccine once the three-month interval is fulfilled.

Those that are working in high-risk settings and those that have recently contracted the virus are also recommended to get the booster dose as soon as they become eligible.

However, Peter Collignon, professor of microbiology from the Australian National University said that the vaccination of this age group will not make much impact on preventing severe outbreaks in schools.

“I think probably less [impact] than expecting because the main benefit of boosters is for those over the age of 50 or 60, where most of the deaths are occurring,” Collignon said on Sunrise on Feb. 2.

He argued that the risk of severe disease and death within the younger cohort is already low, and despite the public notion that they may get infected and pass it on to older Australians, they are also not the cohort with the highest proportion of cases.

According to the Australian Heath Department’s data, Australians between 20 to 40 years of age take up the major proportion of COVID-19 cases.

Collignon however, stated that although vaccines, in general, are less effective in controlling the spread of COVID-19 it was better than not being vaccinated at all.

The vaccines decrease people’s chance of “dying or getting seriously ill; which is what the vaccines were designed to do,” he said.

“They’re very good at stopping or dying getting seriously ill, but less effect on you getting and spreading to others.”

“I think we had unreasonable explanations or expectations for how much spread they would decrease which is evident in what’s happened or Omicron over the last few weeks.”

Collignon also mentioned that rapid antigen tests (RATs) are useful for testing for the virus when one already has symptoms, but he noted that asymptomatic people can easily receive a false negative on the test.

“If you’re unwell, and you have a RAT test and it’s positive, there’s a very high chance—90 percent plus that you’ve got it and also that you’re more infectious.”

“But using them on asymptomatic people, you’ll probably only pick up half the cases. So, you know, there’s a lot of testing you have to do for probably not a lot of return. When we had zero COVID [cases] they were inappropriate because they missed so many cases.”

Data released by the COVID-19 Critical Intelligence Unit on the specificity and sensitivity of the RATs also support Collignon’s statements.

Sensitivity is higher for those with symptoms with a sensitivity of 72 percent.

Collignon encouraged a more “nuanced” approach to using RATs saying that it won’t make a lot of difference for asymptomatic people to be tested every day.

“Testing asymptomatic people every day often is probably not all that beneficial. What we should use them is for people with symptoms, but also in some high-risk situations. For instance, staff in nursing homes where the people are still very vulnerable even with vaccination.”

As of Feb. 3, 40.82 percent of Australians over 18 have received their boosters.