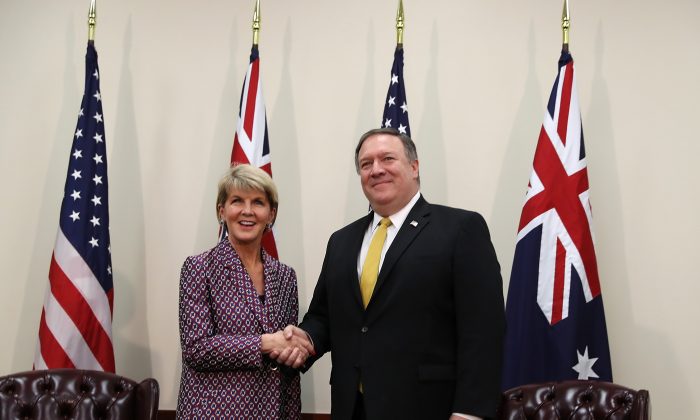 U.S. Secretary of State Mike Pompeo (R) shakes hands with Australian Minister for Foreign Affairs Julie Bishop (L) before the start of a meeting during the Australia-U.S. Ministerial Consultations (AUSMIN) at the Hoover Institution on the campus of Stanford University July 23, 2018 in Stanford, California. U.S. (Justin Sullivan/Getty Images)
Asia & Pacific

Australia and Japan are teaming up with the United States to boost investment in Indo-Pacific infrastructure projects in a move that is seen to be countering China’s increasing influence in the region.

In a joint statement on July 31, the nations announced a trilateral partnership to invest in regional projects that would “build infrastructure, address development challenges, increase connectivity, and promote economic growth.”

The investments include energy, transportation, tourism, and technology projects with an aim to “stabilize economies, enhance connectivity, and provide lasting benefits throughout the region.”

The announcement comes at a time when the Chinese regime is pouring in billions on massive infrastructure projects on its Belt and Road Initiative (BRI), also known as One Belt, One Road, to build up geopolitical influence in the area.

The Chinese regime has used the historical imagery of the Silk Road trade route as the rationale for partnering with more than 60 countries across Asia, Europe, and Africa on the infrastructure projects.

The projects, however, have increasingly drawn scrutiny from some countries concerned that the Chinese regime could be using the program to buy political allegiance and further its geopolitical interests.

Although China or the BRI were not mentioned in the July 31 announcement, there were unmistakable references made in the statement to the BRI.

According to a report published by the U.S.-based think tank Center for Global Development in March this year, several countries participating in the BRI are seen to be at great risk of going bankrupt as a result of future financing related to BRI projects.

Among 68 countries participating in the BRI, the report found that 23 countries were “significantly or highly vulnerable to debt distress,” while eight were “of particular concern.”

Without making any specific references to China, U.S. Secretary of State Mike Pompeo told the Chamber of Commerce on July 30 that the United States wanted “a free and open Indo-Pacific” that was not dominated by any one country.

“Like so many of our Asian allies and friends, our country fought for its own independence from an empire that expected deference,” Pompeo said in his speech.

“We thus have never and will never seek domination in the Indo-Pacific, and we will oppose any country that does.”

During his speech, Pompeo announced the United States will provide US$113 million in new initiatives to support digital economy, energy, and infrastructure in the region.

“These funds represent just a down payment on a new era in U.S. economic commitment to peace and prosperity in the Indo-Pacific region,” he said.

Australia’s Trade Minister Steven Ciobo told Sky News on July 31 that the partnership did not seek to “challenge” the Chinese regime. He added Australia should have an active role “in engaging with developing economies across the region” and help meet some demands for infrastructure.

“And, of course, our aid program, especially in the Pacific, is one where we invest a lot of time and effort in making sure that we have a sustainable approach to the provision of infrastructure throughout the region.”

Ciobo also quelled concerns about Australia receiving backlash from the Chinese regime for its involvement in the partnership.

“The fact is that we demonstrate consistently that Australia is very focused on making sure that we can help the least developed economies in our region to get onto more economically sustainable footing,” he said.

Annie Wu contributed to this report