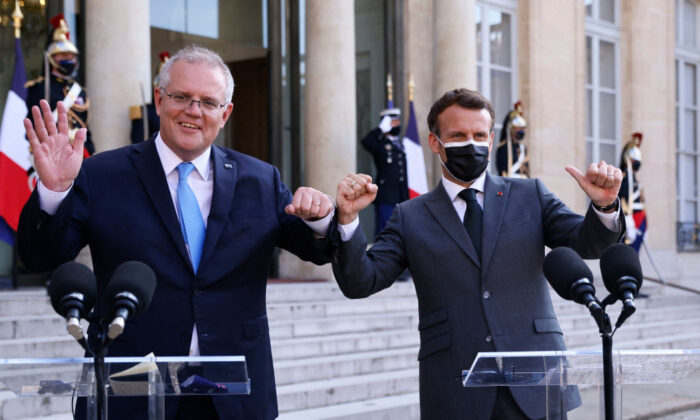 French President Emmanuel Macron (R) and Australia's Prime Minister Scott Morrison answer the press prior to a working diner at the Elysee Palace in Paris on June 15, 2021. (Thomas Samson/AFP via Getty Images)
Australia

Australia Accused of Breaking ‘Relationship of Trust’ by French President

Australian Prime Minister Scott Morrison has spoken with French President Emmanuel Macron for the first time since a diplomatic row erupted over the cancellation of an AU$90 billion (US$65 billion) submarine contract with the European power.

The Elysée Palace issued a statement of the phone call between the two leaders on Oct. 28, saying the move “broke the relationship of trust” between both nations.

“It is now up to the Australian government to propose tangible actions that embody the political will of Australia’s highest authorities to redefine the basis of our bilateral relationship and continue joint action in the Indo-Pacific,” the statement read.

“Looking ahead to the upcoming G20 in Rome and COP26 in Glasgow, the president of the French Republic encouraged the Australian prime minister to adopt ambitious measures commensurate with the climate challenge,” it continued, calling on the government to reduce the production of coal and contribute more to the International Solar Alliance.

The prime minister’s office said the leaders had a “candid discussion” on Australian-French relations.

“The prime minister looks forward to future collaborations on our shared interests, particularly in the Indo-Pacific,” according to a statement obtained by AAP.

A formal face-to-face meeting has not been organised at the upcoming G20 summit, where Prime Minister Scott Morrison is expected to speak on Australia’s contributions to cutting emissions and efforts to address social media risks to children.

“Obviously, the French are upset. There is no question about that; they have expressed that, and we understand their frustration,” he told the Nine Network on Oct. 29

“Once we get through that next year, hopefully, we can continue with steps to normalise the relationship, but that’s the situation at the moment.”

French anger was triggered following the announcement of the AUKUS pact between Australia, the United States, and the United Kingdom in September.

While AUKUS promises greater technological collaboration between the allies, the focus has been on how the U.S. and UK governments will assist Australia with acquiring at least eight nuclear-powered submarines.

The move saw the Australian government take up a contractual option to cancel the ongoing Future Submarines Program with a French defence contractor, Naval Group.

French ministers reacted by accusing Australia and the United States of “stabbing it in the back” and proceeded to recall its ambassadors from Canberra and Washington D.C.

Trade deal discussions between the European Union and Australia have also been postponed.

“The reality is that the French should have seen this coming. They should have seen the fact that the submarine they had sold to the Australians under the previous government was not working out,” Greg Copley, president of the International Strategic Studies Association, said. “We would not see this new French design submarine into Australian service for at least 20 years.”

“This is absolutely unacceptable in either economic, political, or strategic terms because we don’t know what the strategic environment is going to be like in 20 years’ time,” he told Emeritus Professor of Law David Flint in an episode of Australia Calling. “And the French persisted in this knowing that this was a great rip-off of Australian taxpayer money for a product which didn’t exist.”

Joseph Siracusa, adjunct professor of international diplomacy at Curtin University, said the French were upset because AUKUS was a significant step-up in countering Beijing and disrupted French and European efforts to maintain “strategic autonomy” toward the Chinese Communist regime.

“They’ve been trying to avoid choosing between Washington and Beijing. They want their own ‘strategic autonomy,’” he told Sky News Australia on Sept. 20

“Europe thought they could play the honest broker between Washington and Beijing, and then wake up one morning and find out that the United States, Britain and Australia have tied up together with this nuclear-enabled deal, and of course, it’s forcing Europe to make decisions it doesn’t want to make,” he said.

The original plan was for the Naval Group to convert 12 of its new Barracuda-class nuclear submarines into diesel-electric powered Attack-class submarines fitted with U.S. weapons systems.

The pioneering, hybrid project was riddled with ongoing delays and cost blowouts from original estimates of AU$10 billion to AU$89.7 billion.

Prime Minister Morrison revealed that the government had already spent AU$2.4 billion (US$1.7 billion) on the project before construction had begun.