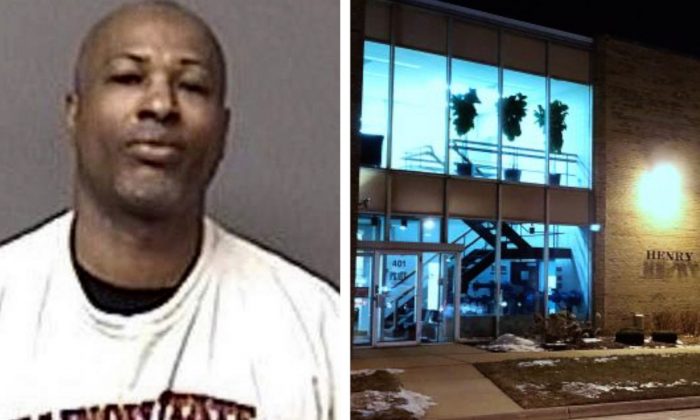 Gary Montez Martin, who police say killed multiple people at a suburban Chicago manufacturing warehouse after he was fired, on Feb. 15, 2019. (Aurora Illinois Police Department via AP—Robert Chiarito/Reuters)
US News

AURORA, Illinois—The family of the man who fatally shot five people at a suburban Chicago manufacturing warehouse is offering condolences to the victims’ families, with one relative saying “we deeply apologize” for the killings.

Martin’s cousin, Jesseca Clemons, told The Beacon-News that she and her family “would like to send our deepest apologies to all the victims’ families, friends and loved ones.”

“No one in our family condones anyone’s life being taken,” Clemons told the newspaper on Monday. “We know that this is a hard time and we deeply apologize and we are praying for everyone. And we ask the same in return.”

Clemons, 34, said Martin’s mother is grieving for her son and that “she would like for everyone if they could, find it in their hearts to find forgiveness,” so her family and others can move forward.

The family has no immediate answers on what led Martin to open fire at the industrial valve manufacturer about 40 miles west of Chicago, Clemons said. The shooting also left a sixth worker wounded.

“We are saddened by his actions and we are shocked,” she said. “We had no clue he would ever be involved in something like this.”

Illinois Gov. J.B. Pritzker said Tuesday his administration is reviewing how Martin had a weapon despite a felony conviction and is examining the “problem that’s apparent in the system of retrieving firearms from people whose FOID cards are voided.”

Illinois State Police said Monday that Martin had lied about his criminal history in 2014 to obtain a card from the agency that allowed him to purchase a handgun.

Martin had answered “no” to a question on his January 2014 application for a Firearm Owner’s Identification card about whether he’d ever been convicted of a felony, state police said.

A records search “revealed no prohibiting factors” in Martin’s Illinois criminal history, state police said. His card was approved on Jan. 31, 2014. He then purchased a handgun in March 2014.

State police said Martin submitted fingerprints as part of an application later in March 2014 for a concealed carry license. Those prints revealed an FBI record and a felony conviction in Mississippi for aggravated assault stemming from the stabbing of an ex-girlfriend. Martin was sentenced to five years in prison for the assault, and was released from custody in April 1997, state police said.

But it prompted only a letter to Martin notifying him that his concealed carry application was denied and ordering him to surrender his weapons.

State police say Martin’s FOID card was revoked in April 2014 and that their procedure at the time was to notify local law enforcement. Aurora police Sgt. Bill Rowley said Tuesday that the department has no record of receiving that notification, though he said it’s possible it was sent and the department no longer has a record of it.

Illinois law requires people whose FOID cards are revoked to surrender their card within 48 hours and to document that they have surrendered their weapons or transferred them to a valid FOID card holder or local law enforcement, a form known as a Firearm Disposition Record. Local police are required to mail that form to Illinois State Police if they receive it.

State police say they issued 10,818 revocations to FOID card holders in 2018. They said “in most instances” the Firearm Disposition Record isn’t returned.

Illinois lawmakers who support more gun control measures say there’s a flaw in Illinois law because it does not mandate that police ensure weapons have been removed if a red flag is raised after someone passes a background check and receives a FOID card.

Legislation was introduced in 2016 to require police go to the homes of gun owners who have their FOID cards revoked and search for the weapons. Democratic Rep. Kathleen Willis said that measure failed over concerns it would overtax police departments.