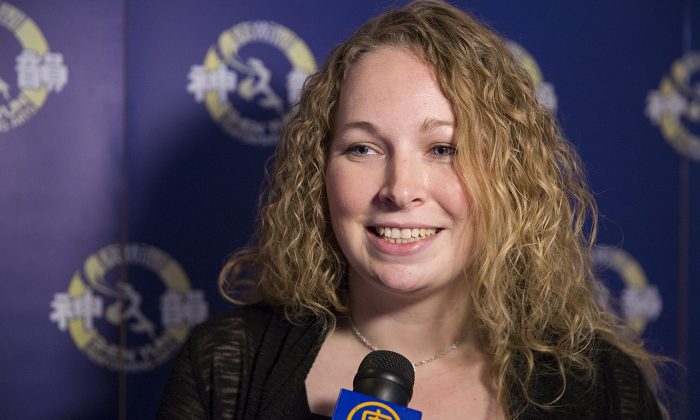 Brittney Brewer identified with the theme of compassion and kindness that shone through in Shen Yun at the Sony Centre in Toronto on Jan. 24, 2015. (Evan Ning)
News

Audience Members Identify With Theme of Compassion in Shen Yun

The classical Chinese dance and music company performed in front of a full house at the Sony Centre on the afternoon of Jan. 24—the fourth of six Shen Yun shows in Toronto for 2015. Classical Chinese dance is a very expressive art form, which enables it to tell stories without speaking. The audience never fails to take something special away from the show.

For Brittney Brewer and her husband Chad, both photographers, that “something special” was the theme of compassion and kindness.

While many of the pieces explore China’s rich cultural history, the dance-story “Power of Compassion” illustrates the modern-day situation in China for those who practice the spiritual meditation discipline of Falun Dafa. In the presentation, a policeman tries to arrest people practicing Falun Dafa and injures his leg in the process. Instead of running away and abandoning the stricken policeman, the Falun Dafa practitioners help him receive blessings from divine beings and his leg is eventually healed.

“It just seemed kind and caring and that they loved everyone and that they even wanted to help those who were hurting them,” Ms. Brewer said. “I really enjoyed how they looked out for each other and protected each other.”

In fact, one of the characteristics of the universe is compassion, according to the teachings of Falun Dafa.

Mr. Brewer echoed his wife’s views. “[Shen Yun] brings forth the really good morals and promote kindness towards one another,” he said. “There’s just simply not enough of that in the world.”

According to Shen Yun’s website, “Principles such as benevolence and justice, propriety and wisdom, respect for the heavens, and divine retribution, all come to life.” Through story-based dances that recount ancient myths and bygone heroes, Shen Yun presents protagonists who are renowned for their compassion and tolerance as well as courage and determination.

A trio of friends—Kusum Bhagat, Pummi Grover, and Palvinder Kaur—were part of the full-house crowd and also felt the warm, caring values presented in Shen Yun.

Ms. Bhagat, a networks engineer for Hydro One, enjoyed the many vignettes that brought out the traditional Chinese values, in particular compassion, according to her understanding.

“The values are more to do with compassion, that’s what really made me feel very touched about it,” said Ms. Bhagat. She felt that many ethnicities could identify with the ancient Chinese values presented by Shen Yun.

“It really gives you connectivity with everyone, so many different cultures, but we’re still connected in the same way—that is, compassion,” she said.

“As Kusum said, [there’s] lots of messaging behind the emotion as well, behind the poetry,” said Ms. Baghat’s friend Ms. Kaur. “So it was like the true culture and arts mixed together and I kind of like that.

“Compassion was the one that came out.”