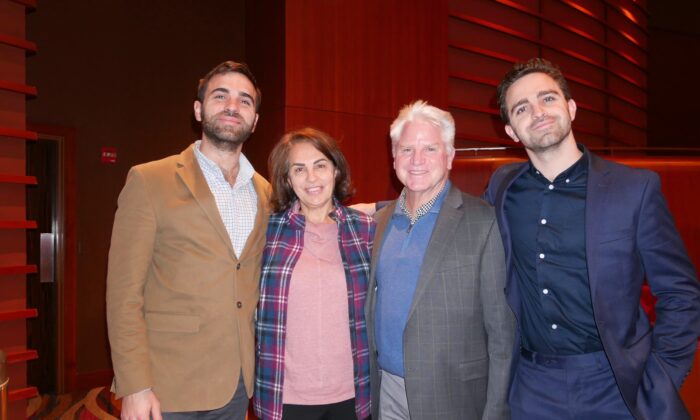 ATLANTA, Ga.—“This is like a massage for the soul, and for the mind, and for the emotion. You’re able to let yourself go and forget all of the stress that you have in your day. And you can truly take in the beauty that humans can create,” said Michael Knight who was enjoying Shen Yun Performing Arts with his family.

The Knight family had gathered at the Cobb Energy Performing Arts Centre in Atlanta to watch the world’s foremost classical Chinese dance and music company. Three of the family members are co-founders of the energy company Carbon Recall.

Michael had arrived at the theater after a long day at work and experienced the life-changing power of a Shen Yun performance.

“The calmness, the relaxation, the interconnectivity with the music and dance to get in touch with one’s soul again,” said Michael.

“Because you spend your life always moving around, always going from point A to point B as fast as you can because we live in a world where everything is moving very fast. So, you come and you sit down and you relax, and you get to really just pay attention to the world around you for one moment. And you realize how beautiful some of the arts and the things that we overlook in our daily lives are. And how much they can change you as a person, just by experiencing it one time,” he said.

Recalling the “Water Sleeves” dance that depicts the graceful ladies of the Chinese imperial court, Michael recounted his impressions.

“Watching them retract and detract the sleeves and the way they moved was like water. And you realize the powers of being like water—because water will always fill in the shape that it is filling, like a tea kettle or a cup or whatever shape it is that water will—it will acclimate, it will transition itself. And it will always at the end of the day be full—of life, of whatever it is that you interpret that to be, through the dance, through the music, through your own self—when you inherit this sound and this art.”

“And to kind of bring it back to full circle, it is almost like a reset. Like when you get a massage, you feel very light, you feel good, your body’s been reset in a sense,” said Michael.

“I like how they brought together the sound and the visual—[Shen Yun] married them very well together,” she said.

She was also impressed with how Shen Yun’s innovative projection was able to create a seamless interaction between the projection and the actors on the stage. “I’ve never seen that before and this is very well done. To the point where the actors fly out of the horizon,” Mireille said in awe.

Shen Yun has a wide repertoire of dances including classical Chinese dance, but also folk and ethnic dancing that have their distinctive rhythms and unique dance styles.

“[It] was really exquisite dancing—beautiful. And when [the performers] are dancing, they have that beautiful bright smile on their face. The men are very powerful. When they jump in the air it’s like they defy gravity,” Mireille said.

The company also has a live orchestra with Western instruments serving as a foundation accentuating the distinct sounds of the traditional Chinese instruments. It also presents vocalists and solo instrumental performances.

Mireille was inspired by the song, “To Heaven in this Life,” sung by Shen Yun’s vocalist. The lyrics are translated to English on the backdrop for the audience to follow.

“And the message is, [that] at the end of the day, there is a divine power and then that power will always be able to overcome evil. And I think that this is what they wanted us to understand from that performance, and I got it,” said Mireille.

She praised the performance of the erhu player. The erhu is a traditional Chinese two-stringed violin.

“Wow, I mean seriously. She poured her heart into it. You could feel it, you see it. It’s really beautiful.”

“It is good for us to understand more about the Chinese traditional culture. What we hear in the news is not … the real China. I think personally [Shen Yun] is the real China, and I really applaud them and I wish them the best of luck. And believe me, if there is another show, we’ll be the first ones to come,” she said.

Shen Yun is very much a Knight family affair with Nicolas Knight, a mechanical engineer, saying that his sister and brother-in-law had come to see the performance the previous day.

“It was an eye-opening experience—it was fantastic,” he said. Shen Yun had offered a beautiful display of Chinese culture.

Nicolas was also “absolutely blown away” by the soprano. “The way she was able to carry notes …  it kind of just gave you chills down your body.  It’s that energy that she was giving off.”

He explained that he felt that he was actually on the stage with the dancers. “I definitely plan on seeing more performances like this,” he said.

For John Knight, it was the delicate movements of the dance and the emotion that carried him through the performance. “It was really gratifying and very wonderful,” he said. He felt both touched and energized by Shen Yun. John is a security consultant in the solar energy field.

“I didn’t know what to expect. I was very, very pleasantly surprised. I’m familiar with martial arts so I saw a lot of the same type of movements in the Chinese dance.”

Classical Chinese dance dates back thousands of years and has become one of the world’s most comprehensive dance systems.

“Balance is the key, with the hard and the soft and the fast and the slow, rough and the gentle—they all came together in yin and yang,” said John, describing the ancient Chinese concepts of balance.

A Shen Yun performance comes from the heart and all the elements of the detail are giving out a message, said Michael.

Shen Yun’s presenters prepare the audience with a brief description of each performance, something many audience members appreciate.

Michael noted how the emcees had explained “how through civilization we all share certain qualities—compassion, love, logic, hatred—emotions that innately make us humans.”

“Regardless of what time you live in, whether it’s in 2022 or 122, you still share those emotions with those people. And you’re able to draw that inspiration through time and you’re able to make sense of what your life is about,” he said.