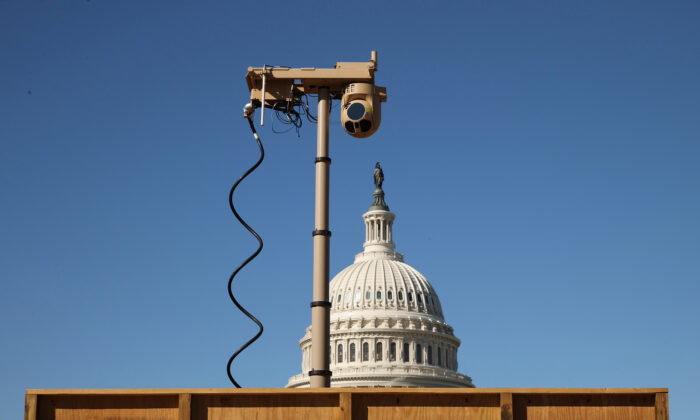 A temporary, mobile surveillance tower is surrounded by a wood fence as it stands on the east side of the U.S. Capitol on Oct. 19, 2021. (Chip Somodevilla/Getty Images)
By Alice Giordano

At least 25 federal agencies have implemented a system to track religious exemption requests for mandated vaccines, according to a review of Federal Register notices by The Epoch Times.

The agencies include the departments of Justice, Health and Human Services, Housing and Urban Development, Transportation, the Treasury, the Social Security Administration, the Federal Election Commission.

The Heritage Foundation, a conservative group, earlier this week found that 19 agencies were either considering or have already implemented the tracking system. The group warned that the system may be a test pilot plan to monitor all federal workers.

An Epoch Time review of Federal Register notices identified six additional agencies and confirmed that a total of 25 are actively tracking religious exemption requests from employees of federal agencies along with any contractors, consultants, interns, and volunteers associated with them.

Due to the Biden administration’s choice of the little-known Pretrial Services Agency to implement the database, The Heritage Foundation called the system a “test run” for a nationwide database of all religious exemption requests made by federal workers. The Pretrial Services Agency gathers information and makes recommendations about newly arrested defendants in the federal criminal system.

Notices of the new tracking system were only made public in the Federal Register, the daily journal of the federal government. News of the system drew criticism from conservative officials.

“The Biden Administration must immediately dismantle the Orwellian Database,” Missouri Attorney General Eric Schmitt wrote in a public comment he posted on regulations.gov. “There is no freedom under our Constitution more sacred than the freedom of religious expression and practice.”

He called the move “alarming” and said it had “a chilling effect on a citizen’s exercise of religion.” The attorney general directed his comments specifically to Secretary of Transportation Pete Buttigieg.

“Rather than give the public ample time to weigh in on the advisability or legality of collecting such personal information, the Department of Transportation’s database, in particular, became effective on the day it was published,” Schmitt said.

Agencies announcing the implementation of the tracking system didn’t return requests for comment.

None of the notices published in the Federal Register announcing the tracking systems state why the religious exemptions were being tracked or what the Biden administration plans to do with the information collected.

Descriptions of the religious exemption tracking system don’t specifically name the COVID-19 vaccination as one of the mandates. However, the notices do state that the new system is in response to guidelines issued by the newly created Safer Federal Workforce Task Force under Biden’s executive order that established the nationwide COVID-19 vaccine mandate.

“This system of records maintains personal religious information collected in response to religious accommodation requests for religious exception from the federally mandated vaccination requirement in the context of a public health emergency or similar health and safety incident, such as a pandemic, epidemic, natural disaster or national or regional,” one of the notices reads.

The tracking system will include names and personal religious information, according to the notices.

“As the nation’s largest employer, with over four million civilian and military employees, the federal government has received tens of thousands of religious exemption requests,” The Heritage Foundation wrote in its updated report.

“It now appears that an increasing number of federal agencies are keeping and preserving those individuals’ names, religious information, personally-identifying information, and other data stored in lists across multiple government agencies.”

The court didn’t overturn the vaccination mandate for health care workers or military members. Those employees can only avoid the COVID-19 vaccine by applying for a religious exemption.