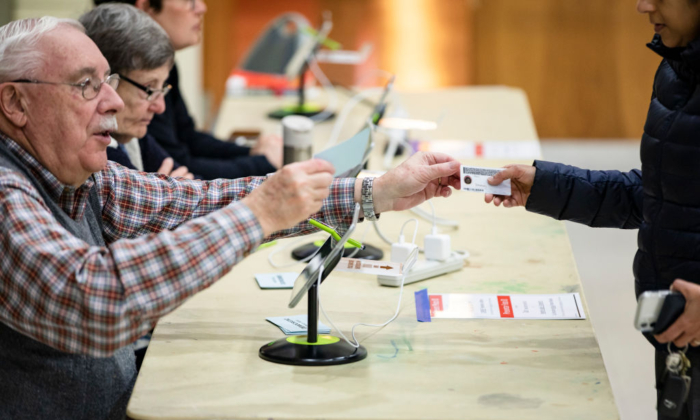 An election official hands a voter back his ID at the Madison Community Center polling place before he can cast his ballot in the Democratic presidential primary on Super Tuesday on March 3, 2020, in Arlington, VA. (Samuel Corum/Getty Images)
US Features

In 10 state legislatures across the nation, more than 40 bills proposing new or more stringent voter identification requirements for registration or in-person voting had been introduced as of Feb. 11, according to the National Conference of State Legislatures (NCSL).

Missouri lawmakers are pondering 13 voter ID measures as part of a package spearheaded by Secretary of State Jay Ashcroft, who has called for legislation requiring a state or federal photo ID to vote in person.

The 11 bills in Virginia are in response to the 2021 adoption of the Voting Rights Act of Virginia before Republicans won the governorship and retook control of the House of Delegates last November.

The Voting Rights Act of Virginia “effectively eliminated ID requirements when Democrats had control. The ID requirement is still on the books, but the photo ID part is not enforced,” Honest Elections Project Executive Director Jason Snead said.

“The effort being made in Virginia is to just enforce the state’s photo ID law,” said Snead, whose group works with the American Legislative Exchange Council in crafting elections integrity bills carried by state lawmakers nationwide.

The measures in Virginia, Missouri, and beyond are part of a broader national trend of overhauling election practices. Of the 45 state legislatures currently in session across the nation, at least 40 are debating elections-related bills, according to NCSL.

The left-leaning Brennan Center for Justice at New York University said on Feb. 7 that, as of Jan. 14, at least 18 bills in five states impose new ID requirements for absentee ballot applications. The requirements include either a Social Security number, a driver’s license number, or a voter record number.

The Indiana House has approved a measure pushed by Secretary of State Holli Sullivan, requiring voters to submit their driver’s license number or the last four digits of their Social Security number when requesting an absentee ballot digitally.

Under state law, those not registered can show at polls, present “evidence of their identity,” age, and U.S. citizenship with a state-issued driver’s license or ID card, birth certificate, passport, or naturalization papers. If a voter doesn’t have documents, they sign a “qualified voter affidavit,” swear they are who they are, and promise to provide verification within 90 days.

“You could come here from another state, another country—you could land here from Mars—and vote in New Hampshire elections that same day,” said Alliegro, who is sponsoring legislation that requires all ballots be hand-counted.

“You sign an affidavit and are supposed to provide that proof within 90 days. Then the [vote] tally is made, the elections are certified, and 90 days later, you haven’t” provided verification, he said.

“This happens thousands of times in this state every election,” Alliegro said.

“Look, most people believe in requiring voter ID. It doesn’t necessarily have to be a state-issued driver’s license or ID; in Colorado, people can use their electricity bills,” said Corman, who is among Republican candidates seeking the GOP nod to challenge Democratic Gov. Tom Wolf in November’s gubernatorial election.

“There will be some sort of ID requirement,” he said. “We could land [during the session] on what that is supposed to look like.”

A bill filed in Arizona by state Sen. Wendy Rogers, a Republican, requires the secretary of state to seek an exemption from the federal law—upheld in court rulings—that bars proof of citizenship to vote. It’s one of several Arizona bills related to voter ID.

“Something we are hearing is people saying they’re never going to vote again if these problems aren’t fixed,” she said. “We want to restore confidence in our elections. Right now, the confidence isn’t there.”

Arizona voters may also weigh in on the proposed constitutional amendment tightening voter ID requirements in November if lawmakers adopt a resolution to place a ballot measure before voters.

Michigan voters also may be presented with a voter ID ballot measure after Democratic Gov. Gretchen Whitmer vetoed a 2021 bill imposing new requirements. Secure MI Vote proponents need 340,047 voter signatures on a petition by March to get it on November’s ballot.