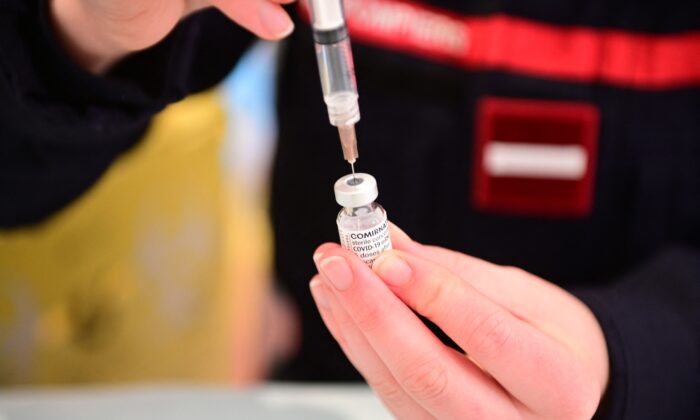 A firefighter prepares a vaccination against COVID-19 at the Gymnase Le Moulin in Cergy, a northwestern suburbs of Paris, France, on March 13, 2021. (Martin Bureau/AFP via Getty Images)
Vaccines & Safety

AstraZeneca COVID-19 vaccinations were halted by France, Italy, Spain, and Germany due to precautions, officials said Monday, as Italian officials seized thousands of doses of the medicine in a northern province after a man died. The UK company and EU regulators have previously said there is no evidence that the vaccine is to blame for reported blood clots and alleged deaths.

“The decision has been made … to suspend the use of the AstraZeneca vaccine as a precaution, hoping that we can resume its use quickly if the judgment of the EMA [European Medicines Agency] allows it,” French President Emmanuel Macron said at a press conference on Monday.

Germany’s government said Monday that it will also suspend the use of the AstraZeneca shot after reports of dangerous blood clots emerging in connection with the vaccine. Some reports said recipients of the vaccine have fallen ill.

“After new reports of thromboses of the cerebral veins in connection with the vaccination in Germany and Europe, the PEI considers further investigations to be necessary,” said the German Ministry of Health Monday. “The European Medicines Agency will decide whether and how the new findings will affect the approval of the vaccine,” it added, according to news reports.

The Italian medicines authority AIFA, meanwhile, confirmed it would suspend the vaccine as a “precautionary and temporary measure” ahead of the EMA’s ruling. Italian prosecutors on Monday announced they seized thousands of doses of the vaccine in the northern province of Piedmont after a man died hours after he received the vaccine, Reuters reported.

The man was identified as 57-year-old Sandro Tognatti, a music teacher who fell ill and died in circumstances that are unclear, officials told the news agency. Officials in Italy’s Sicily ordered a separate batch of the AstraZeneca vaccine be seized after two deaths were reported.

“It is therefore important to ensure that continued administration of the drug throughout the country does not lead to further consequences (harmful or fatal) … until we are completely sure that (Tognatti’s) death cannot be attributed to the above-mentioned inoculation,” prosecutor Teresa Angela Camelio said in a statement Monday.

In a statement to The Epoch Times, AstraZeneca said that “the safety of all is our first priority.”

“We are working with national health authorities and European officials and look forward to their assessment later this week. Around 17 million people in the EU and UK have now received our vaccine, and the number of cases of blood clots reported in this group is lower than the hundreds of cases that would be expected among the general population,” it read.

But also on Monday, Spain’s Health Minister Carolina Dias announced that the country will stop administering the shot for two weeks. Dias also announced it would be a “precautionary” and “temporary” measure.

Spanish officials have said they’ve only been giving the AstraZeneca vaccine to people under the age of 55.

AstraZeneca has said there have been 37 reports of blood clots out of more than 17 million people vaccinated in the 27-country European Union and Britain. The drugmaker said there is no evidence the vaccine carries an increased risk of clots.

“Many thousands of people develop blood clots annually in the EU for different reasons,” the EMA has said. The incidence in vaccinated people “seems not to be higher than that seen in the general population.”

In Europe, Ireland, Denmark, Norway, the Netherlands, Bulgaria, Romania, Luxembourg, Estonia, Latvia, Lithuania, Austria, and Iceland had previously suspended usage of the vaccine. Outside of Europe, Thailand, the Democratic Republic of Congo, and Indonesia have suspended it. Denmark’s Medicines Agency also said that a 60-year-old woman died after receiving the shot

Polish Health Minister Adam Niedzielski on Monday warned that Poland would hold off on a decision to approve the vaccine.