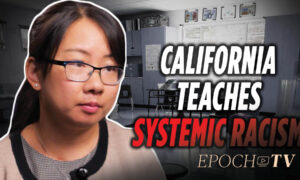 Asra Nomani, a former Wall Street Journal reporter and a parent in Fairfax County, Virginia, said she never before experienced the kind of prejudice and discrimination she encountered over the last year from those pushing critical race theory in her local school district.

In an interview with Epoch TV’s “American Thought Leaders,” Nomani said she was “horrified” by the months-long “assault on Asian-American families” at the county’s Thomas Jefferson High School for Science and Technology, one of the nation’s top-achieving schools, where her son was a senior.

“It just all began with an email in June 2020,” Nomani told host Jan Jekielek.

In that email, which was sent to mostly immigrant families, the school’s principal said they needed to check their “privileges” in the wake of George Floyd’s death.

“And we were just shocked, because this was a woman who has gone to our Lunar New Year celebrations and our Diwali parties, and she knows that we are families from all across the world,” said Nomani, whose Muslim family immigrated to the United States from India when she was four years old. “They are amazing, amazing families who have endured a lot to get to America, and the fact that our kids go to this school doesn’t put us in this vaulted category of the privilege of society.

“We were just normal people trying to make ends meet, trying to keep our kids healthy, trying to make sure that they get a good night’s rest. It was like a knife to the heart. I just thought to myself, ‘Wow, like, overnight we just lost our humanity.’ That really made me angry, because that’s not OK.”

The Fairfax County school board, according to Nomani, has since proceeded to introduce a series of changes, such as replacing its so-called “colonial” mascot, dropping the name of Thomas Jefferson, and replacing the race-blind admissions process with race-based lotteries and quotas in an effort to make the demographics of the student population better match that of the county.

“It was racial demographics,” she said. “It was that we didn’t have enough underrepresented minorities, meaning blacks and Hispanics, and we had too many Asians.”

“Do you think we’re that stupid? We know that you’re not teaching the pedagogy of critical race theory. What you’re teaching is the end product—that there’s oppressed and oppressors, that we have a hierarchy of suffering, and you have to find yourself on this,” she explained. “It’s propaganda—flat out propaganda.

“This is not just theory. This has now become worksheets in classrooms, where kids literally have to fill out their oppression, where they fit on the oppression scale. They get segregated—can you just imagine? It’s this 21st century and we are now segregating children based on race.”

Nomani, who identifies as a liberal, urged parents, regardless of their political affiliation, to join forces against the indoctrination effort she describes as racist and inhumane.

“This is my liberal community that’s pushing out this racism, and I’m going to really call them out on it, because they’re just doing something that is so wrong and immoral,” she said. “We have to keep as our North Star, whether you’re liberal, conservative, independent, whatever, wherever you are, our North Star of humanity, and to stay focused on that.”