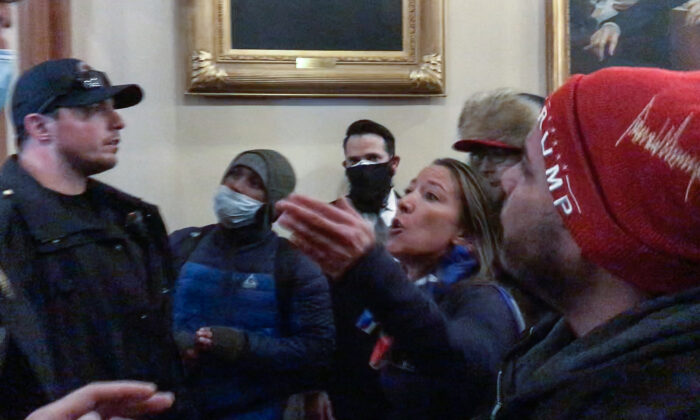 Moments before being shot to death, Ashli Babbitt confronts three police offers for not stopping the vandalism outside the U.S. House. (Video Still / ©Tayler Hansen)
US News

Trump supporter jumped up and down, waved hands in frustration at motionless officers: "Call...help!"
By Joseph M. Hanneman

Just moments before she was shot and killed, Ashli Babbitt confronted the police officers guarding the doors to the Speaker’s Lobby at the U.S. Capitol on Jan. 6, 2021, blasting them for allowing rioters to smash the windows and not calling for backup, an analysis of a journalist’s video shows.

The analysis comes on the heels of recent disclosures that Babbitt tried at least four other times to stop the assault on the Speaker’s Lobby. It shows her desperation when the rioters were left unchecked, even smashing a window just inches from a police officer’s head.

In the video—shot by independent journalist Tayler Hansen—Babbitt, 35, is seen trailing rioter Zachary Alam, attempting to get between him and one of three police officers at the Speaker’s Lobby double doors.

The first time, he grabs one police officer’s shoulder with his left hand, then punches between him and another officer, striking the window, the video shows.

“Chill out! Chill the [expletive] out, bro!” someone shouts. “Hey! Chill out!”

“These guys work for us!” someone in the crowd interjects.

“You gonna shoot him?” another person asks.

A bearded man in a red Trump cap complains that they are not being allowed into the Speaker’s Lobby. “Mother [expletive]! We don’t want to hurt nobody. We just want to go in the House.”

Babbitt tries to get in between Alam and one of the officers. She says something to Alam, but he brushes her off. Alam then cranks up his right arm and punches the window next to the officer. Within a few seconds, Babbitt blows up at the officers for allowing the violence and vandalism.

“Call [expletive] help!” Babbitt shouts, jumping up and down in front of the officers. “We’re allowed to be here!”

Babbitt takes a couple steps back. There was no visible reaction from the officers, sparking her anger. “You’re a fraud!” she shouts. “You’re a [expletive] fraud! You’re wrong!”

After walking away, Babbitt can be heard screaming just off camera: “Take it down!” Hansen said he believes she meant for the crowd to calm down.

“You could tell that she was definitely getting upset,” Hansen said while reviewing the video with The Epoch Times. “She was calm when she first got there. Then as the destruction continued and as more people started to fill in and it got more dangerous, that’s when you can tell she was getting really upset.”

Babbitt served as a police officer in the U.S. Air Force during her 14 years of military service. Her husband, Aaron, said her law enforcement experience likely told her something was wrong.

“I believe she saw their inaction as odd or off, and was ultimately confused as to what was happening,” Aaron Babbitt told The Epoch Times. “She was a take-charge kind of person. Her frustrations show that the cops who should’ve been taking charge—weren’t.”

“I’d only seen bits and pieces and never fully put together,” Aaron Babbitt said of the video. “I can hear the confused panic in her voice.”

He said the video makes him sad, since his role as a husband is to protect his wife. He stayed in San Diego to run the couple’s small business while Ashli attended the Trump rally in Washington. She was trapped in the hallway, and claustrophobic.

“She had no friends in that room,” Babbitt said. “I always go back to no one would’ve ever watched out for (her) like I always did. Very helpless.”

Babbitt said he hopes the video analysis gives the public a better understanding of the chaos in the hallway.

“I’ve known something was off with the whole situation from day one,” Babbitt said. “Hopefully this gives other people a different perspective—or at a minimum makes someone take a second look with a different mindset.”

“What I think it was from reviewing the footage and just from knowing what I know about Ashli from the family, is she probably got claustrophobic,” Hansen said, “because more people and more people kept pouring in and she realized she was in a bad situation. So then she pushed her way over to the window area.

“Once that window broke, I think she realized this was going to be bad for the people inside if they were actually able to breach these doors entirely,” Hansen said. “I think she wanted to be the first one through that window so she could kind of safeguard it, honestly. If she can get to the other side of the window where officers are, in her mind she would be safe.”

Hansen said he just discovered an Instagram live-stream video he shot on Jan. 6 that shows Babbitt as she first turned the corner into the Speaker’s Lobby hallway. He said it confirms what he told The Epoch Times on Jan. 17, that Babbitt was friendly with the police officers when she first approached the doors.

“Ashli just walks right up to them and just seems super happy; doesn’t know what she’s about to walk into. She was joking with the cops right before Byrd put a bullet into her.”

Hansen said he first encountered Ashli in the Capitol Rotunda as she entered the building by herself. He next saw her as he emerged from a room with George Washington’s portrait on the wall, then followed her to the Speaker’s Lobby hallway. They were the first two to reach the double doors.

“It shows her and me just walking right up to the door with Officer Yetter and all the other cops and she starts talking to them.”

Hansen also captured the moment Lt. Michael Byrd shot Babbitt as she stepped up into the open window frame to the right of the double doors. The bedlam in the hallway quickly turned to panic—and anger.

“There’s an active shooter here! Get her down!” Hansen shouts.

“She needs help! She needs [expletive] help!” someone screams.

A man off camera reaches in at the 38-second mark of the video and check’s Babbitt’s neck for a pulse. “She’s gone, guys.”

“We can’t [inaudible] if you’re here!” a police officer shouts at the crowd. “We’ve got to get EMS here!”

An officer leaning over the stairway railing, shouts, “She’s going to [expletive] die! You want to be next?” he says

“Go, go! Everyone get the [expletive] away!”