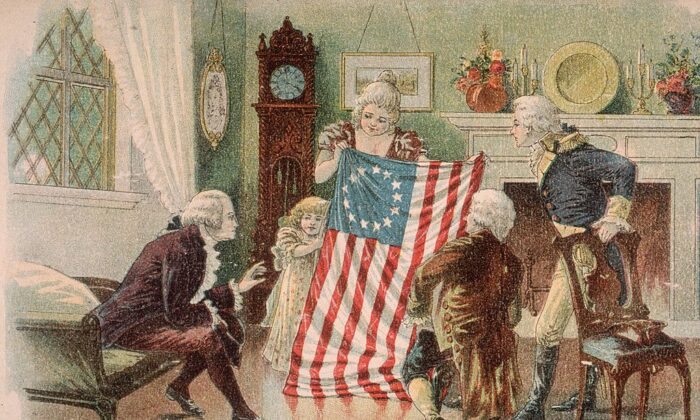 A leaked FBI internal bulletin on domestic terrorism lists U.S. Capitol shooting victim Ashli Babbitt as someone considered to be a “martyr” by militia violent extremists (MVE) and the Second Amendment as how militias “justify their existence” because of a reference to a “well-regulated Militia” and the right to bear arms.

The “Domestic Terrorism Symbols Guide” was leaked to Project Veritas, which released images of the bulletin on its website and social media on Aug. 2. It includes such common images as the Gadsden flag, the Betsy Ross flag, and the Liberty Tree.

The document includes terms and symbols that are very familiar in conservative, law enforcement, and military circles. In the introduction, the FBI stressed that simply using the terms or symbols isn’t evidence of wrongdoing.

“The use or sharing of these symbols alone should not independently be considered evidence of MVE presence or affiliation, or serve as an indicator of illegal activity, as many individuals use these symbols for their original historic meaning or other non-violent purposes,” the bulletin reads.

However, many on the right are likely to see the bulletin as further evidence of federal government acrimony for conservatives in the wake of the Jan. 6, 2021, breach at the U.S. Capitol.

“Widespread use of symbols and quotes from American history, especially the Revolutionary War, exists within MVE networks,” the bulletin reads. “Historic and contemporary military themes are common for MVE symbols.”

The document is marked “unclassified/law enforcement sensitive” and “for internal use only.”

Babbitt’s name is included on a list of five people that “MVEs consider … to be Martyrs,” according to the document. Others include Arizona rancher LaVoy Finicum, shot to death by Oregon state police in 2016; Vicki Weaver, killed by a federal sniper in the 1992 siege at Ruby Ridge, Idaho; and Marvin Heemeyer, a disgruntled muffler shop owner who used an armored “killdozer” to raze a section of Granby, Colorado, in 2004.

Ashli Babbitt’s husband, Aaron Babbitt, of San Diego, offered a one-word reaction about her name on the list when contacted by The Epoch Times: “Laughable.”

Ashli Babbitt’s family has fought a never-ending battle against those who call her a “rioter,” an “extremist,” or a “terrorist.” Such terms have been used despite video evidence showing that she tried to stop rioters from vandalizing doors and windows leading into the Speaker’s Lobby. Just before she climbed into a broken window and was shot, Babbitt delivered a punch to the nose of the agitator who did much of the damage.

Babbitt, 35, was a 14-year veteran of the U.S. Air Force and the National Guard. She was killed by Capitol Police Lt. Michael Byrd.

According to the FBI bulletin, common phrases associated with militia violent extremists include: “When tyranny becomes law, rebellion becomes duty,” “I will not comply,” “The tree of liberty must be refreshed from time to time with the blood of patriots and tyrants,” and “All enemies foreign and domestic.”

Symbols of militia networks listed in the document include that of the Three Percenters, sometimes called “Threepers,” a group the FBI says is “based on the myth that only 3 percent of Americans fought back against the British during the Revolutionary War.”

Also included are the Oath Keepers, a group of former military, law enforcement, and first-responders who are the major target of federal prosecutors trying criminal cases against Jan. 6, 2021, defendants.

The bulletin states that figures who inspire MVEs include Oklahoma City bomber Timothy McVeigh; Steven Carrillo, convicted of a drive-by shooting at the federal courthouse in Oakland, California; and the medieval Crusaders, soldiers of the Catholic Church who fought to free holy lands from Islamic rule.

The content of the FBI bulletin was immediately panned on social media.

“This government would consider all the founding fathers domestic terrorists and that’s really all you need to know about who the real terrorists are here,” one commenter wrote on Truth Social. “It’s funny … really … but I don’t see any mention of that organized group in all-black who marches the streets with communist flags and chants ‘death to America’ while burning our flag.”

One Twitter user wrote, “So basically every symbol or quote used to inspire Americans to defeat the British and throw off the chains of tyranny is now considered extremist?”