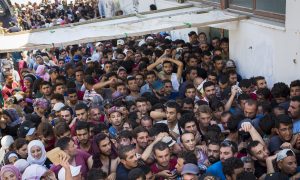 Syrian Refugees—How Many More Can We Afford?
0 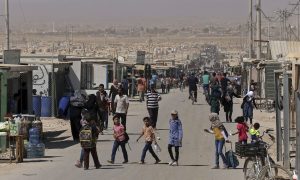 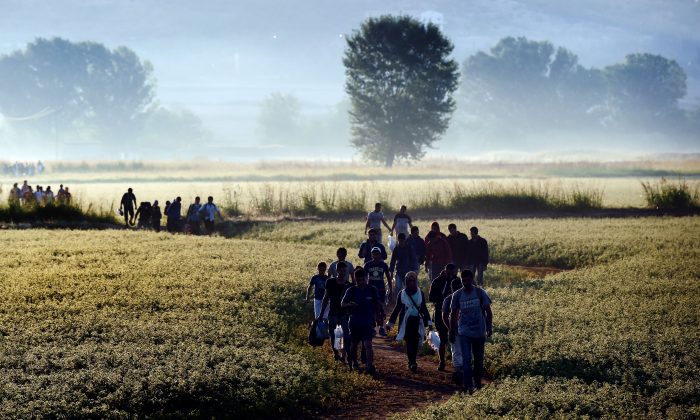 Syrian refugees and migrants walk in a field to cross the border between Greece and Macedonia on Aug. 29, 2015. (Aris Messinis/AFP/Getty Images)
Opinion

In the first week of September, the Syrian refugee crisis finally came to Western Europe.

Thousands of refugees who had been bottled up in Hungary started heading for the Austrian border, on trains, IN buses, and finally on foot. Most are on their way to Germany, which has declared that all refugees are welcome and expects as many as 800,000 within the year. That is around 1 percent of the German population, with Austria and Sweden set to take a similar proportion.

The moral case for taking these refugees is overwhelming. Many informed commentators have also convincingly argued that there are important economic benefits that come with accepting refugees said—for example The Economist, researchers Michael Clemens and Justin Sandefur, and journalist Simon Kuper.

Many commentators have argued about the benefits of accepting refugees, but it is too soon to measure the impact on EU countries.

It is of course too soon to start measuring the economic impact in EU countries, but this crisis is not new.

Syrian refugees started arriving in Jordan, Lebanon, and Turkey in late 2011. Turkey is currently hosting over 1.9 million of the 4 million Syrians who have fled war, while Lebanon has about 1.1 million and Jordan houses 630,000. In Turkey, that’s 2.5 percent of the population.

So what’s been the impact in the countries such as Turkey that have borne the brunt of the crisis since the Syrian civil war began?

In a recent working paper, World Bank senior economist Ximena Del Carpio and I investigate the impact the flood of refugees has had on the Turkish labor market. While Turkey has been very generous in providing immediate care for the large inflow of refugees, it now faces the challenge that the overwhelming majority of refugees no longer live in camps but rather in the wider Turkish society. In this area, it has been less generous, creating both costs and opportunities for Turkish workers.

Turkey has not given the Syrians in Turkey official refugee status and stopped short of issuing work permits to all but a few. As a consequence the economic impact has been felt in the large informal sector, which goes untaxed and unmonitored. Informal employment accounts for around 30 percent of paid employment in Turkey, and an additional 15 percent of employment consists of unpaid family workers.

Turkey has been dealing with the Syrian refugee crisis for years, and its experience yields valuable lessons.

We found evidence of large-scale displacement of Turkish workers in informal jobs. Three groups are particularly hard hit: women, the low educated, and workers in agriculture. This is particularly bad news for women as it perpetuates their already very low labor force participation. Currently only one-third of the female working-age population is active in the labor market, though at least some of that is on account of women being encouraged to stay in school longer.

Our work highlights the crucial role played by a country’s efforts to integrate refugees in labor markets.

The Turkish decision not to issue work permits has meant that the costs are being borne disproportionately by some of the poorest and underrepresented Turkish workers. It also means that Turkey may miss out on the benefits that the most high-skilled and entrepreneurial refugees can bring, as these are encouraged to move westward. For Western European countries with their smaller informal sectors and extensive welfare states, a rapid integration of refugees into labor markets is essential. The current procedures are typically lengthy, and suggestions to speed up this process are controversial.

Policy needs to also recognize that not everyone will gain from an inflow of refugees. The fears of the 56 percent of Turkish people who agree with the proposal asserting that “Syrians take our jobs” are not baseless.

At the same time, even as the situation seems dramatic at the moment, the impact on Western host countries should not be exaggerated. Of the 15 million international refugees, 86 percent reside in developing countries. Jordan and Lebanon are hosting Syrian refugees numbers equivalent to 10 percent and 25 percent, respectively, of their population. That is truly dramatic. The UNHCR—the U.N. Refugee Agency, which administers most refugee camps worldwide—in particular needs to be far better funded.

Nevertheless, while the current political climate favors a generous treatment of refugees, it is a precarious consensus. The underlying tensions are starkly visible in Austria, which in the absence of a workable EU policy is functioning like a distribution center for refugees.

In September alone, 210,000 refugees entered Austria, primarily on their way to Germany. In the capital, Vienna, huge crowds marched in solidarity with these refugees. At the same time in a city where the left has ruled for over a century—aside from the Austrofascist and Nazi years, 1934–1945—the populist far-right is close to becoming the strongest party. Voters main concerns are jobs and solutions to the refugee crisis.

Turkey has been dealing with the Syrian refugee crisis for years, and its experience yields valuable lessons. Countries and the world as a whole likely benefit from a generous treatment of refugees. While there will be those who lose economically from an influx of refugees, opening our borders and showing compassion to refugees in need is the right thing to do.

So is taking seriously those who bear the economic burden.

Mathis Wagner is an assistant professor of economics at the Boston College. This article was previously published on TheConversation.com