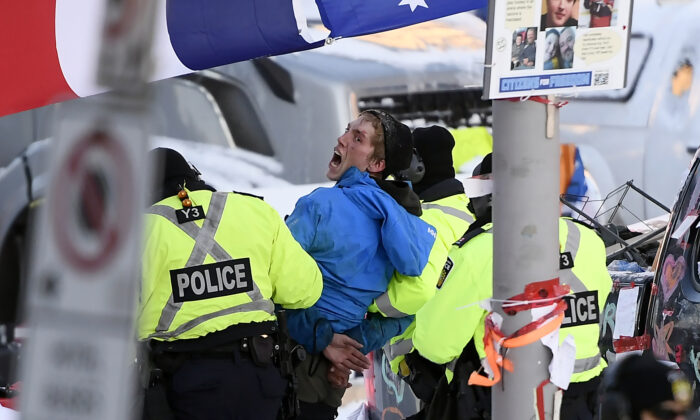 A protester is arrested by police in Ottawa on Feb. 18, 2022. (Justin Tang/The Canadian Press)
Canada

Interim leader of Canada’s opposition Conservative Party Candice Bergen says the situation unfolding in the nation’s capital as police clamp down on protesters was created by the prime minister “and his desire to divide Canadians.”

“I’m disturbed & saddened by what we are seeing today in Ottawa. This situation was created by the PM & his desire to divide Canadians,” Bergen said in a tweet on Feb. 18. “It’s time for MPs to return to the House tomorrow to stop the overreach by this government & restore unity, wholeness & hope back to our nation.”

Police escalated their operation against protesters in Ottawa on Feb. 18, making over 100 arrests and towing over 20 vehicles. Mounted police and officers on foot advanced on demonstrators, with horses in some instances knocking down protesters.

The expanded operation comes after Prime Minister Justin Trudeau invoked the Emergencies Act on Feb. 14 for the first time since it was passed in 1988.

“What’s happening in Ottawa today is squarely at the feet of one person. Justin Trudeau. He pushed through with a cynical mandate for political expediency when all indicators were that it was time to ease up on such measures,” Housakos said on Twitter on Feb. 18. “Justin Trudeau and only Justin Trudeau owns this.”

A survey published by Maru Public Opinion on Sept. 25 showed that 77 percent of Canadians found the country more divided after the election than it was before the federal election.

Another poll by Leger for the Association for Canadian Studies conducted between Sept. 10 and 12 found that more than three in four respondents hold negative views about those who are unvaccinated.

Liberal MP Joël Lightbound broke ranks with his party on Feb. 8, saying that the Liberals politicized the pandemic at the time of the 2021 election.

“From a positive and unifying approach, a decision was made to wedge, to divide, and to stigmatize. I fear that this politicization of the pandemic risks undermining the public’s trust in our public health institutions,” Lightbound said at a press conference.

Liberal MP Yves Robillard also broke ranks with his party the next day, telling The Hill Times on Feb. 9 that Lightbound “said exactly what a lot of us think.”

Bergen repeated Lightbound’s concerns in the House of Commons on Feb. 8, saying she could not agree more with Lightbound, who she said “clearly and strongly stated it’s time to end the divisiveness and the politicization and end the mandates.”

In response, Trudeau acknowledged that people are tired of pandemic-related restrictions, but said that his government will “continue to follow the science” on appropriate health measures.

“Everyone is sick and tired of lockdowns, of the measures we have to do, of the sacrifices we’ve had to make, but Canadians have continued to step up over the past two years, been there for each other, been there to get vaccinated,” Trudeau said.

The Emergencies Act needs to be debated and voted on in Parliament within seven days after it has been invoked. Speaker of the House of Commons Anthony Rota said that House proceedings will be suspended on Feb. 18, due to expanded police operations to clear the protesters by Parliament.