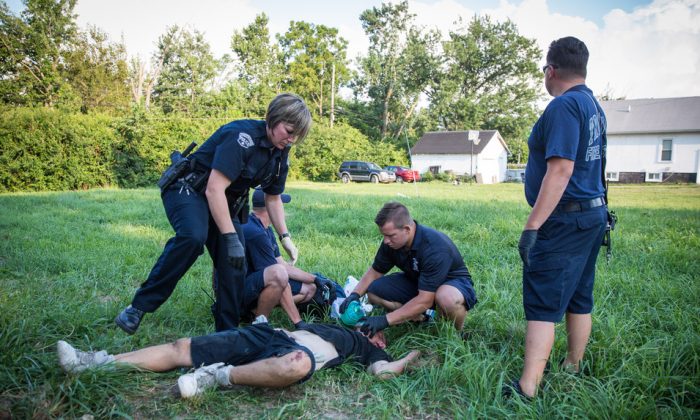 Local police and paramedics help a man who is overdosing in the Drexel neighborhood of Dayton, Ohio, on Aug. 3, 2017. It's unclear what he overdosed on. (Benjamin Chasteen/The Epoch Times)
US News

NEW YORK—As efforts to combat the opioid epidemic ramp up at the federal level, countless nonprofits and organizations at state and local levels spend each day dedicated to fighting the battle, oftentimes on the front lines.

The specific missions of these groups differ from each other, with some focusing on passing legislation in Congress, some promoting educational initiatives, while others organize faith-based programs. But all are united in a common goal: stemming the tide of the deadly opioid crisis, which, on average, takes the lives of 130 people every day across the United States.

One group that focuses on a prevention-first approach, Prevent Opioid Abuse, seeks to pass legislation on a state-by-state basis to increase transparency between those who prescribe opioids and their patients. The key purpose of the organization is to encourage state legislators to pass a law that requires prescription providers to notify their patients about the addictive qualities of opioids and to tell them about non-opioid alternatives to address acute pain.

“The reason this is so important is that so many people begin the disease of addiction and become addicted to heroin as a result of the prescribed medicine,” Angelo Valente, a representative of Prevent Opioid Abuse, told The Epoch Times. “Eighty percent of people who are addicted to heroin started with a prescription drug.”

The legislation, dubbed the “Patient Notification Law,” was first passed in New Jersey in 2017. Since then, 15 additional states have passed the same law, he said.

Valente said patients who are prescribed painkillers often have no idea of their potentially addictive nature.

“It only takes five days for dependency to begin,” he added.

The opioid epidemic has been deemed a public health crisis. It has claimed the lives of nearly 400,000 people between 1999 and 2017, according to the latest U.S. data.

Brittany Shutz, executive director at the York Opioid Collaborative (YOC), told The Epoch Times that they first started to see a rise in opioid deaths in York in 2014.

The nonprofit is a collaborative effort between public safety and public health departments and agencies. Over the past few years, Shutz said there has been a “steady increase” in overdose deaths.

The YOC uses “data and evidence-based strategies” to promote a range of initiatives including providing training and education to the community on safe opioid prescribing and safe storage. The group also does academic detailing with physicians on this area.

One thing Shutz said she’s witnessed in the county is the rise of fentanyl-related deaths.

“Above 80 percent of our overdose deaths had fentanyl in them in 2018. In 2019, it’s trending about the same,” she said. “Unfortunately, we are seeing fentanyl in most of the drugs on the street, specifically heroin.”

Overdose deaths, despite slowing slightly since January 2017, increased to around 31,500 at the end of 2018 from around 28,600 at the end of 2017, according to data from the Centers for Disease Control and Prevention (CDC). China is the “largest source” of illicit fentanyl in the United States.

Recent cases of fentanyl-related overdose and deaths are linked to “illegally made fentanyl,” the CDC has stated. Fentanyl, which has been approved for treating severe pain for conditions such as late-stage cancer, is 50 times more potent than heroin and 100 times more potent than morphine, and is prescribed by doctors through transdermal patches or lozenges.

“It takes just a small amount to be deadly,” Shutz said. “You’re not really sure what you’re getting, and if fentanyl is in it, it increases your chances of eventually overdosing. It’s like Russian roulette.”

Erin Khar, a former opioid addict who had struggled with addiction for more than a decade, told The Epoch Times she first started taking the drug when she was 13 years old as an escape.

“I had first tried a painkiller I found in a medicine cabinet, an expired painkiller and I liked the way it made me feel,” she said. “I struggled with depression as a child and I think I had that propensity to seek an exit from reality.”

She said at the time she started dating a 16-year boy who was experimenting with heroin, which she later tried. This was what began an addiction to opioids and her subsequent battle with it.

Khar described how she hid her addiction throughout her youth until she got caught by her fiancé at the age of 23. In college, she had used opioids on and off, and in her early 20s, she picked up heroin again after staying away from it for a few years. From there, it went downhill really fast, she said.

“I went to rehab for the first time when I was 23,” she explained. “I was determined to become sober, but it took another five years continually relapsing.”

At the age of 28, Khar found out she was pregnant. She found a doctor to detox her because she didn’t want her baby to be born addicted. She said her son’s birth was a turning point for her.

“It was the thing that got me to do all of the hard work I had to do on myself to make sure I didn’t turn back to drugs,” she said. “I made a commitment to myself. I started seeing a psychiatrist, worked through cognitive behavior therapy, really worked on the core issues that led me to addiction in the first place.”

Those core issues, Khar said, involved childhood trauma—she had been sexually abused as a child, another thing she had kept from her family. Khar is also the author of the forthcoming memoir “Strung Out.”

“I had that trauma I was hiding from everybody and I had an underlying mental health issue with the depression and feeling suicidal,” Khar said.

“They call them painkillers for a reason. Most people that become addicted to opioids are not seeking them for physical pain,” she continued.

For Khar, one of the feelings most associated with addiction—which she believes is true for most opioid addicts—is shame. Year by year, she carried it until she started opening up during therapy and was able to become more honest with herself.

“Let’s say you get off drugs temporarily, you’re still left with the shame of when you were addicted,” she said. “Shame really pushes people back into relapsing, and addiction again. It’s a terrible, terrible cycle.”

Khar said it’s unrealistic to think the United States can make a dent in the opioid crisis until we address the core issue first—why people turn to drugs in the first place.

Robert C. Whitley, an attorney based in Bucks County, Pennsylvania, has been focused on bringing together government leaders, the judicial system, and the faith community to team up against the opioid epidemic.

In the past two years, Whitley has helped organize the Bucks County faith summit, an annual event that takes place in October, when they invite roughly 250 to 300 churches in the country to raise awareness of the opioid epidemic, among other issues. The summit illustrates simple things the church could incorporate into their existing churches facilities to help.

In one particular instance, Whitley arranged an event with the St. Jude Church and the district attorney, who has supported efforts to engage in the faith community and the drug and alcohol commission. A board-certified physician spoke at the event.

In Bucks County, overdose deaths rose steadily in 2015, 2016, and 2017. In 2018, they dropped by 5 percent. This year, the overdose rate is down 10 percent, according to the county coroner who recently spoke at the Christian Life Center in Bensalem, Pennsylvania.

“The only thing I can attribute it to is not only the embracing of government leaders across the board here, but also the churches, the pastors, the faith community—they have really come together and are really working together,” Whitley told The Epoch Times.

“The churches in the faith community have been huge here in Bucks County,” he said.

Also playing a pivotal role are addiction treatment providers. One such group, American Addiction Centers (AAC), became the first company of its kind to become publicly traded in the United States back in 2014.

Dr. Lawrence Weinstein, chief medical officer at AAC, told The Epoch Times that the center uses medication-assisted treatment for opioid use disorder, which he described as “the gold standard of care.” Their treatment includes assessments of each patient’s substance use disorder, their physical health, and their genetics, which helps their physicians choose the optimal medication for each individual.

He said their diagnostic testing allows them to analyze each patient’s genetics and determine their best course of treatment. They also treat patients with other disorders with integrated care—for example, treating patients’ addiction and their mental health disorders simultaneously.

“We help patients plan for life after treatment,” Weinstein said in an email. “We don’t just help patients get clean, we help them stay clean, with a plan and support to stay sober. Before patients leave treatment, we make sure they have everything they need to continue their recovery.”

Data suggests that of the approximately 2 million Americans suffering from opioid use disorder, approximately 1.27 million of them are now receiving medication-assisted treatment, according to the U.S. Department of Health and Human Services.

Weinstein said that with the help of a research institute, AAC utilized three years of tracking and research to analyze how their treatment impacted the lives of patients. He said they have treated thousands of patients, of which a “significant amount” achieved long-term recovery.

“The result was our patient outcome study that showed, out of the patients surveyed, 63 percent remained abstinent 12 months post-treatment compared to the national benchmark of 30 percent,” he said.