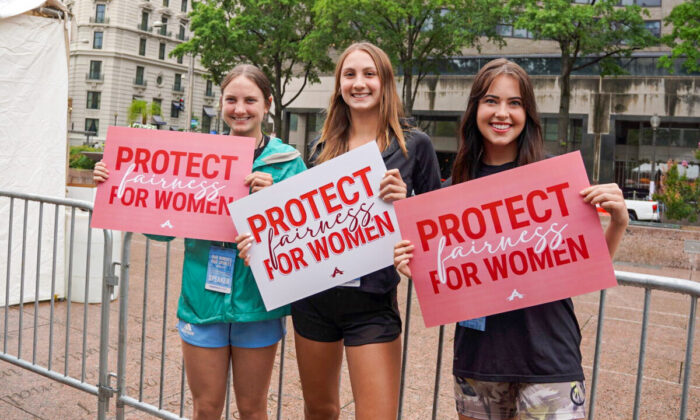 WASHINGTON—A group of female athletes from all over the nation protested on June 23 against transgender athletes competing in women’s sports. The rally at Freedom Plaza in Washington also celebrated the 50th anniversary of Title IX, which prohibits any sex-based discrimination in education programs and activities receiving federal funding and enabled college women’s athletic participation to flourish.

On the same day, the Department of Education released proposed changes regarding “sex” used in Title IX to include sexual orientation and gender identity. The draft rule will be open for public comment for 60 days and will likely be effective next year. The department said it would later release more specific rules on transgender students in school sports.

Riley Gaines Barker, a former University of Kentucky swimmer who tied for fifth place in competition against Thomas at the NCAA Championships in March, was told that her trophy would be in the mail. She said she understood that only one person would get the trophy at the event, as ties at swimming events were scarce. However, she said that when she asked why, she was told that Thomas needed to have the trophy for pictures.

“That’s when I realized that women are being put on the back burner here,” Barker told The Epoch Times. “Not only are we being forced to compete against men, but men are being protected over women at an all-female competition. That’s when I knew I had to speak up about it.”

Representatives for the NCAA didn’t respond by press time to a request for comment.

Barker got married a few weeks ago and has postponed her plan to go to dental school. At the same time, she is taking a gap year for the cause.

“It’s something that clearly a difference can be made, as FINA has shown,” she said, referring to the new International Swimming Federation (FINA) rule that took effect June 20, which curbs transgender athletes who began gender transitions after the age of 12 from competing at the elite level.

Meg Kilgannon, a senior fellow for education studies with the Family Research Council, a Christian advocacy group, told The Epoch Times that the FINA rule was a great first step. However, she said that “when you make it a rule around an age, or a hormone status, or a surgical procedure, you are not honoring the dignity of the human person.”

Madisan DeBos, a cross country and track athlete at Southern Utah State University, recalled her experience in running a relay race in 2020 in which her team lost to a rival with a transgender athlete. After she finished her leg, the first leg of the relay, she screamed and cheered for her teammates. Then, she heard the transgender athlete’s coach telling him to “slow down.” The runner slowed down, and his team placed second.

“Yes, you heard that right. The biological male runner competing in the women’s section was told to ‘slow down’ at a conference championship,” DeBos told the rally participants.

She said she was taken first by “confusion, then anger, and then complete and total sadness” upon hearing “slow down.”

In April 2017, the Connecticut Interscholastic Athletic Conference began to allow athletes to compete based on their gender identity. As a result, 19-year-old Chelsea Mitchell, a former high school track and field athlete and the plaintiff of a lawsuit against the Connecticut Association of Schools, had to compete with and lost to biological males throughout her high school years.

She told The Epoch Times that her confidence gained through sports was destroyed because of competing with biological males and knowing the outcome before the races even began.

In 2019, Mitchell was the first female finisher at the Connecticut state championships in the 55-meter, 100-meter, and 200-meter races. However, she didn’t get the medals and titles because she lost to a biological male, who didn’t rank in the top 100 when he had competed in men’s races in the state.

Christiana Kiefer, another ADF counsel who also represents Mitchell, said in an email that the proposed Title IX changes were “threatening the advancements women have long fought to achieve in education and athletics.”

In recognition of the 50th anniversary of Title IX, President Joe Biden said in a June 23 statement, “As we look to the next fifty years, I am committed to protecting this progress and working to achieve full equality, inclusion, and dignity for women and girls, LGBTQI+ Americans, all students, and all Americans.”