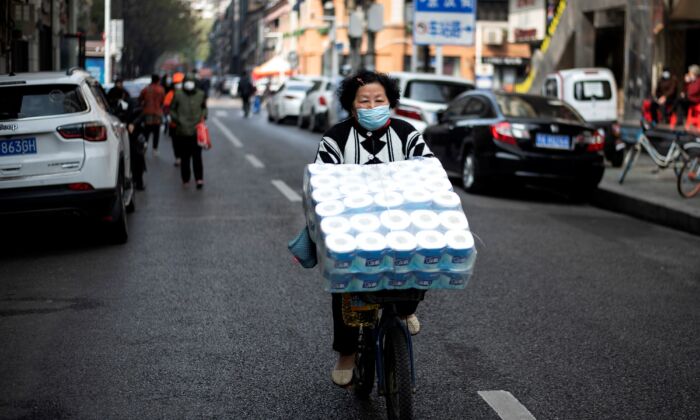 After Chinese authorities in the virus epicenter of Hubei province lifted social distancing rules, more than three million people traveled out of the region in the past seven days, according to an April 1 announcement.

Several people became infected after coming into contact with citizens from Hubei, raising concerns that asymptomatic carriers from Hubei could spread the virus and cause another big outbreak.

Asymptomatic carriers do not show symptoms such as fever, coughing, and sore throat, but test positive for the CCP virus during nucleic acid testing.

On April 1, while Chinese leader Xi Jinping was on an inspection tour of the tech hub of Hangzhou city, he also spoke about concerns regarding asymptomatic carriers.

Speaking to Zhejiang provincial officials, Xi said: “[Local governments] must enhance the management of asymptomatic carriers, and pay attention continually to the task of preventing the outbreak.”

Jia county in Pingdingshan city, located in Henan province, was placed under lockdown again after a healthy person was infected with the virus from an asymptomatic carrier. The county had lifted restrictions on Feb. 28.

Chinese state-run media quoted a March 31 announcement from the county government, stating that all residential compounds and villages must be locked down immediately. Residents cannot go out, even if they possess a “green health code.”

Authorities launched a cellphone-based app for all citizens, which tracks their health condition and movements. A green code means the user is free of the CCP (Chinese Communist Party) virus and can travel freely.

On March 29, a woman from Luohe city in Henan was diagnosed with the CCP virus. She was infected after coming into contact with a former classmate and doctor in Jia county. This doctor and two of his colleagues were asymptomatic carriers. One of the colleagues recently visited Wuhan, the city where the virus first emerged.

On Tuesday, the Commission said that two former asymptomatic carriers began showing symptoms. 302 other suspected cases did not test positive and were discharged from quarantine centers.

The Commission said there was a total of 1,367 recognized asymptomatic carriers in the country.

According to the report, Tang had stayed at home for almost two months due to local lockdown rules. Tang had only come into contact with one diagnosed CCP virus patient—his wife’s uncle—on Jan. 23. In other words, Tang could have been an asymptomatic carrier for more than 60 days.

Besides Tang, governments in Gansu province and other cities of Guangdong province recently reported that they diagnosed virus patients who just arrived there from Hubei.

The Hubei government lifted travel restrictions—except for Wuhan, its capital—on March 25, allowing anyone with a green health code to enter or leave the region.

From April 8 onwards, anyone will be able to move in and out of the province, including Wuhan.

Residents of Hubei are already on the move. On April 1, Liu Yanhong, director of Hubei’s Human Resources and Social Security Department, said at a daily press conference that more than 5 million Hubei residents left their hometown from March 25 to March 31. Of that figure, 1.875 million of them moved to other cities in Hubei, while the other 3.133 million left the province.

Many are worried that Hubei residents could spread the virus further as they travel.

Guangdong, Zhejiang, Jiangxi, Guangxi, Shandong, Gansu, and other provincial governments have since launched new rules requiring that all travelers from Hubei must be immediately quarantined. They will then undergo at least two nucleic acid testings. If they test negative, they will be allowed outside.